Netflixable? Scorsese’s eulogy for “The Irishman”

Posted on November 28, 2019 by rogerinorlando 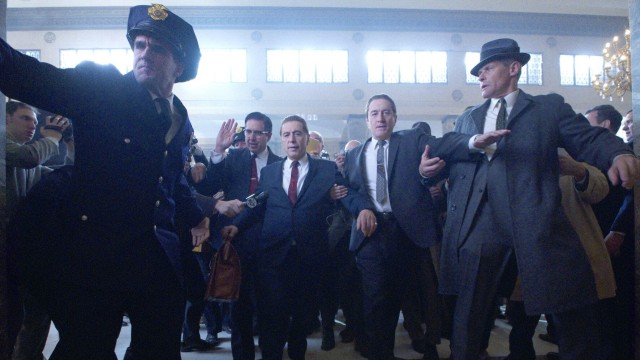 Martin Scorsese’s “The Irishman,” his epic telling of one mobster’s rise through the ranks to the moment Jimmy Hoffa disappeared, is his coda, his final statement on the mob movies he built his career on.

It’s Scorese’s “Unforgiven,” a Catholic’s atonement for all the gilded Oscar glory that was a byproduct of his decades of gangland epics, from “Goodfellas” and “Casino” to “The Departed.” His charismatic monsters and amoral lowlifes burned themselves into the popular consciousness, and maybe — all these decades later, he’s ready to pass a harsher judgement on them.

There’s a hint of “mea culpa” to this curtain call, a recognition that audiences ate up these dead-eyed murderers, extortionists and English-and-fashion-butchering creeps. Here he acknowledges that as colorful as they might seem, the “made men” were never “men of honor,” living by a “code,” loyal to their “brothers.” They were the very essence of Hannah Arendt’s“The Banality of Evil.”

Scorsese goes Biblical, here, a mob movie maestro who wants to make his last statement on the subject — not wholly a departure from his earlier films, just UNDERLINED here — easily understood. When he puts intertitles, peppered throughout the film, of how this goon or that one met an untimely end, we’re reminded of Romans 6:23 —“the wages of sin is death.”

Scorsese and his “Schindler’s List” screenwriter frame the story with a lonely, elderly mobster, Frank Sheeran, voice-over-narrating from his wheelchair, trying to give meaning or at least importance (thus his extraordinary claims) to his awful life. As if his abandonment and loneliness were  punishment enough for decades of violence, thievery and betrayals. Truthfully, that “sentence” is not much of a reward for three hours and 29 minutes investment.

Why did I keep thinking about Steven Spielberg through Scorsese’s funereal mob film finale? Because Spielberg opposed allowing Netflix epics like this bloated, under-edited indulgence into the Academy Awards. A blank check from the streaming service to our greatest living director to tell the mob tale to end all mob tales only meant he’d never hear a Studio Voice of Reason suggesting he thin out the repetition, give it clarity and PACE while losing some of the staggering number of “travel” scenes.

Maybe rely a little less on a repertory company so old he had to “de-age” them for scenes from their early days. Because any way you cut it, “Irishman” is an old man’s movie, and not just in the scenes where Robert DeNiro is meant to be 45 years younger than his 76 years. De-aged DeNiro punches and kicks like he’s scared he’s going to break a hip.

Does this stylistically unstylish picture stand with the lurid glories of “Casino,” the pulse-pounding narrative drive and cinema semiotics of “The Departed,” or the charismatic cynicism of  “Goodfellas?” Give me a freaking break.

The same people who soiled their Underoos over “Roma” are throwing confetti at “The Irishman,” as if excessive running time alone conveyed gravitas. It doesn’t.

Still, I enjoyed it, wrestled with the film’s “one man’s explanation” of the mob’s ties to the Teamsters, the Kennedys and Nixon, and that one “made man’s” utterly unverifiable claims about the end of mob-tied Teamsters chief Jimmy Hoffa. I relished going back into Scorsese’s “Casino” era world of plush leather banquettes in candlelit Italian clam bars and ristorantes, the ritualistic sips of wine and fresh supply of Mafia euphemisms — “I heard you paint houses,” somebody needs to visit “Australia” — mixed in with anachronisms from the mid-2000s.

Hearing “It is what is it” is like seeing a cell phone whipped out in Philly traffic in 1960.

But that enjoyment, unlike the movie, has its limits. Netflix is the perfect place for it. It’s a talky, borderline-plodding two-part mini-series of a mob movie, peppered with Oscar winners from DeNiro and Pacino and Pesci to Anna Paquin as well as an underused Harvey Keitel, with Ray Romano and Bobby Cannavale and even Little Steven Van Zandt as the mob’s favorite lounge singer, Jerry Vale.

“Indulgent?” It’s even longer than the Marvel movies Scorsese has been bashing as “not cinema.” He’s not wrong in his criticisms, and “Irishman” is actually about something — unlike your average comic book movie. But he is pandering to the fans with this cast, even if he is trying to make them question, as he apparently does, why we admire these goons and love immersion in this “tough guy” world.

We follow World War II vet turned refrigerated truck driver Frank Sheeran (DeNiro) to his introduction to Russ Bufalino (Joe Pesci, out of retirement and back in the mob).

“I met what was going to turn out to be the rest of my life,” Frank narrates.

Stealing meat for the mob, running errands, moving into debt collecting and then the rough stuff, we see Frank’s story unfold as a flashback on a cross-country road trip that he and his wife and Russ and his wife took in the red letter year 1975.

The women are introduced, and shoved into the background. As Frank’s complicity grows, his quick turns to violence to settle any beef set in, and his involvement with Jimmy Hoffa (Al Pacino) just immerses him deeper into “our thing.”

His only judge? His daughter Peggy (Lucy Gallina, later Anna Paquin) recoils at his rare displays of violence, his creepy employers and the secrecy she starts to sense is hiding the ugliest truths about her father.

DeNiro’s performance is of a piece with his Jimmy Conway (“Goodfellas”) and Ace Rothstein (“Casino”), a man caught up in his circumstances, but one who only occasionally questions them. His remorse is scattered throughout “The Irishman.” He picks up on his daughter’s judgement, which she demonstrates from an early age. He’s trapped. I have to say I find Frank less interesting as a character than DeNiro’s comical mockery of a mobster, Paul Vitti in the “Analyze This” movies. Vitti, like Frank, is not a deep man, not someone who lets himself think too much about what he does. He can’t. He’s more Michael Shannon’s “The Iceman,” a pitiless dullard. Frank’s only pathos comes in his grasping at fame, telling his story from that wheelchair. We’re allowed to think how full of it he probably is.

Pesci gives a more interesting performance here, totally stripped of the amusing, over-the-top rage that characterized his earlier Scorsese mobsters. Russ has mob myopia. He sees protecting Frank as making himself righteous, even as he’s pushing his protege into mass murder.

Pacino is a lot more Hoffa-like than I expected, less of the “Hoo hah” Al of too many performances in recent years.

Paquin is a visual archetype, a silent judge parked in the middle of a movie where everybody talks too much, drinks too much and does what’s expedient, never what’s right. There is no forgiveness here, no Virgin Mary to pray to. Only condemnation.

The peripheral characters played by Romano, Keitel and Cannavale come and go with such little fanfare that one wishes they’d been left out if you’re not going to do much more than introduce this universe of infamous mobsters — Giancana, Salernos, Genoveses and Columbos — and colorfully-named also rans — “Whispers” DiTullio, aka “The OTHER Whispers.”

The exposition isn’t quite endless. But with so many characters, blending the Kennedy election “fix,” the mob’s loss of Cuba to the Bay of Pigs and the Kennedy assassination to Hoffa’s corrupt Teamsters war with Robert F. Kennedy and a drawn-out finale — the film’s only moments of suspense — Scorsese and screenwriter Steve Zaillian have a lot to juggle and we have a lot to chew on.

Too many “Goodfellas,” it turns out, don’t spoil the broth. But they damn sure water it down.

And an epilogue that meanders past the climax and all but peters out doesn’t leave one so much fulfilled as deflated. That adds up to an OK picture, I thought. Not a great one, and not one of Scorsese’s best even if I’m glad he got to make it.

And I’m glad it’s on Netflix, where one can take it in at leisure, in smaller bites than the Feast of the Seven Fishes Scorsese has insisted we all sit down for, where nobody can hear my “Jesus, Marty, GET ON with it!” but me.

Credits: Directed by Martin Scorsese, script by Steve Zaillian, based on the Charles Brandt book.

22 Responses to Netflixable? Scorsese’s eulogy for “The Irishman”