Netflixable? Vikander has to move to Japan to hear the “Earthquake Bird”

Posted on November 19, 2019 by rogerinorlando 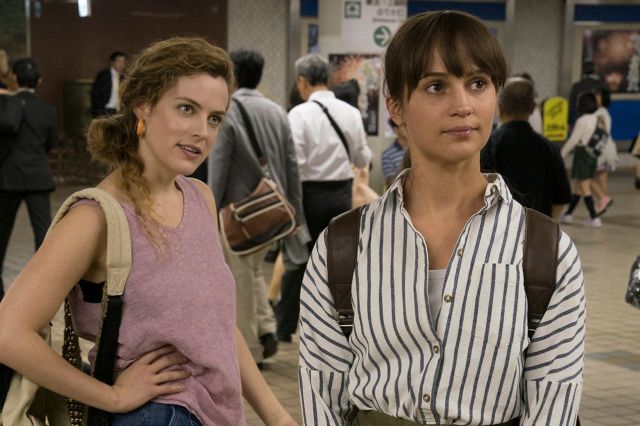 It’s a chilling exercise in isolation, woven out of muted tones and low light, lifted by a fearsomely guarded turn by Vikander, playing a Swedish emigre accused of murdering an American woman.

Vikander is Lucy Fly, a young translator and loner who, when we meet her, is picked up by the police — at work — because of a headline that’s in the days papers. “Body part found in (Tokyo) Bay.”

Her unemotional cool makes trying the old “good cop/bad cop” with her a dicey proposition. The older officer (Kazuhiro Muroyama) uses the testy younger one (Ken Yamamura) as translator for their interrogation. They discuss strategy, in Japanese, in front of her. They have no idea what she does for a living.

“Be careful,” she purrs, in Japanese (with English subtitles). “I understand EVERthing.”

Her day long third degree is the frame that the film’s flashbacks, and flashbacks within flashbacks, tell the story within.

The missing American woman, Lily, (Riley Keough) was forced on Lucy by a mutual friend (Jack Huston), a bon vivant who thinks nothing of inconviencing Lucy with an easily underestimated looker who has moved to Japan, on impulse.

Lily can’t really support herself, doesn’t like much of the food, can’t speak the language and is angling for work as a bartender. Of course Lucy will help her find an apartment. On-the-make Bob (Huston) is banking on it.

We see that meeting, and another first encounter that spins off a police query. “Do you have a boyfriend?”

Teiji takes Lucy’s picture, on the street, and uses his tactlessness as an introduction and a dinner invitation. He is tall, brooding, mysterious and handsome. She is smitten. FYI, Teiji is played by Naoki Kobayashi, a Japanese pop idol. No shock there. He looks like a pinup.

The flashbacks prompted by threads of questioning take Lucy through her relationship with the standoffish but sexy Teiji, who says “Tell me everything” at their every meeting. His own secrets? Aside from him being from the provinces, workings as a noodle chef and pursuing (pre-digital) photography as a passion, he gives little away.

“You must trust me,” he smolders.

That relationship is lopsided. He photographs Lucy incessantly. Every time she stands up for herself, she apologizes.

And Lily is more imposition than friend. Lucy politely invites her along to everything she and Teiji have going on, not that he’s that into going out in public with either of them.

Lucy’s brooding nature has an origin story. “Death follows me,” she tells him (if not the cops, later). “It always has.”

There’s something cagey about her interaction with the police. She’s not quite toying with them, but she’s not volunteering much, either. It’s as if she’s expected something like this to happen, has carried that weight before. She can feel responsible even if she isn’t guilty. And she’s not saying, one way or the other. 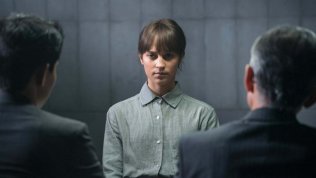 Westmoreland anchors “Earthquake Bird” firmly in the realm of period piece. We glimpse Lucy at work, coming up with subtitles for the Ridley Scott thriller of that era, “Black Rain” (Scott’s company produced “Earthquake Bird.”).

This is pre-Internet Tokyo, pre-cell phones. The cops can’t do much homework and research on the principals, here. Mail from the U.S. takes eight days to get there. And in a flashback that could only be set in 1989, Lucy and the others hike near Mount Fuji.

“Did anyone bring a camera?” No. Ancient history.

The “bird” of the title is one that you can only hear sing in the deathly still silence after an earthquake. What will it take to make Lucy “sing?”

The film’s resolution, and really its third act, is so frustrating that it rather spoils much of what has come before. It makes the subtle story in which not a lot happens (and little that’s not predictable) feel malnourished.

But even if this film of a Susanna Jones novel makes a middling whodunit, it’s still a fine vehicle for Vikander, an actress of quiet reserve and inner fury. She and the exotic setting lift “Earthquake Bird,” even if it never fully takes flight.

Credits: Written and directed by Wash Westmoreland, based on the novel by Susanna Jones.  A Netflix Original.