Posted on November 7, 2019 by rogerinorlando

And the Money Moment, the hilarious scene previewed in the trailers and TV commercials where racing driver and race-car building legend Carroll Shelby delights and then frightens to the point of tears the Ford heir and CEO of the Motor Company on a mad lap in the company’s Ferrari-fighting GT40 racer? Never happened.

But damn, it feels right — dramatically, comically and thematically. And in James Mangold’s epic, bracing and breezy spin around a piece of motorsport legend, if it didn’t happen, it sure as hell should have.

Want a lesson in how a two and a half hour period piece can just fly by? Mangold (“Walk the Line,””Logan”) gives a master class in it, using the struggle, the titanic figures engaged in it and the pedal-to-the-metal setting to plunge us into American motorsport’s equivalent of The Moon Landing.

Here’s Shelby, a hustling hard-selling Texan given a compact, cunning and comic understatement by Matt Damon. He was the first American to win the prestigious 24 Hours of LeMans, and when he was forced to stop racing himself, he put a Ford V-8 into tiny British AC Ace sports car and created a world beating racer, and one of the most valuable collectible automobiles in history — the Shelby Cobra.

At Ford in the early ’60s, Lee Iacocca (Jon Bernthal) has just innovated the company out of the doldrums with the young-motorist-magnet Mustang, and convinced the boss, Henry Ford II (Tracy Letts), amusingly nicknamed “The Deuce,” that what Ford REALLY needs, image-wise, is to buy the great European sports car builder Ferrari, which runs the fastest cars in the races that have cachet among the young — sports car races.

Bernthal gives us a taste of the Great American Salesman and cheerleader that Iacocca would become.

“James Bond does not drive a Ford, sir!”

The Deuce is sold. Sure, let’s cut a check. Even if the CEO thinks James Bond is “a degenerate.”

But the Italian-American Iacocca gets hustled by the real Italian, Enzo Ferrari (Remo Girone), who finishes his “NO deal” tirade (Fiat bought an interest in Ferrari instead) with a flurry of insults about the “fat” Ford and his “ugly factory” putting out millions of “ugly cars.”

The bluff and deadpan Ford — we’re introduced to him shutting down an assembly line to chew out and motivate the work force during a downturn — has had enough of “getting it in the tailpipe from a Chevy Impala.” And he’s not going to take this insult from some snooty Italian slur. Oh no.

Build a car. Form a team. Win LeMans. And do it quick.

That’s how they come to Shelby. But Shelby comes with baggage, an ornery Brit who owns a garage that services British sports cars like the MGA in Southern California, a champion SCCA race car driver with a test pilot’s feel for tweaking, adjusting and turning a car into a world beater.

“Brilliant, but difficult” is the label Ken Miles wears. Christian Bale wouldn’t be insulted by noting how on-the-nose casting him as Miles is. Yeah, they have a few things in common.

Shelby has to “handle” Miles and please his Ford masters, including Leo Beebe (Josh Lucas), Director of Special Vehicles at Ford, basically the “suit” in charge of its racing teams, set up as the villain of the tale.

The Italians are the exotic foreign menace, arrogant again a mere two decades after their World War II humiliation. But the “enemy” in this 90 day sprint to put a car on the track that will humble them is ponderous American Corporate Culture, and Beebe becomes a thorn in Shelby and Miles’ side — hated, always putting “the company” and its culture and “image” first.

We don’t see the Brits who hastily designed the GT40, just them delivering it to Shelby and Miles and Shelby’s ace in the hole, engineer Phil Remington (Ray McKinnon). The movie focuses on that trio’s efforts make this burly beast hold the corners, hug the track and “go like hell” when she does.

The car is iconic, and gets that “Right Stuff” sort of star entrance here. Brits designed it, but it feels American — bluff, muscular and aggressive. Put a Ford V-8 in it and you can’t wait to hear her get angry.

Casting Bale pays dividends in all the scenes with the car being tested, through Remington’s DIY wind-tunnel on-the-track idea of figuring out why it’s trying to go airborne, through engine changes, brake issues, all the racing failures leading up to “The Big Race.”

Bale’s Miles is in the car for all this, thunking through gears, talking to himself and the car in his no-nonsense Cockney cheerleader accent. “Oh YES,” at everything he likes in the set-up. “I’ll have some more of THAT, if you please!” Inevitably punctuated with a disappointed “Bloody hell!”

Characters show their emotions in “Ford v. Ferrari” in fits of recklessness — ex-Air Force pilot Shelby taking the controls of a Ford company plane to land at the big announcement ceremony, Miles’ venting his fury at Shelby on the track, Mrs. Mollie Miles (Caitriona Balfe) scaring Ken half to death careening their Ford station wagon through backroads as she chews on him for not telling her he’s getting back into racing.

And then there’s that Shelby drives Hank the Deuce in the “$9 million car you paid for” moment.

Letts, a playwright and actor who has made deadpan authority figures something of a specialty in his film career, gets a laugh every time he turns up in the film. He’s got Ford-during-World-War II anecdotes to underscore his “just win” lectures. He’s peevish at failure, and you could believe this man would spare no expense just to get even with somebody who insulted him. This is a great supporting turn. 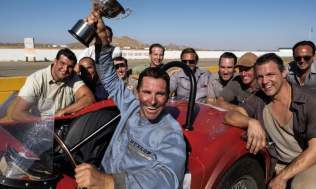 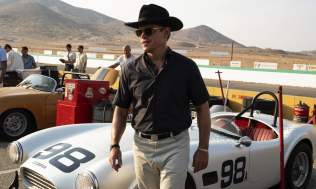 Damon’s take on Shelby is colorful and canny, letting us see the wheels turning as he sizes up people and summons up the appropriate, drawled “My Daddy used’t tell me” anecdote to get what he wants — from Miles, Remington or Ford. His Shelby is a compromised hero, never quite living up to “larger than life,” but still a Western archetype whose laconic narration puts the film on a man-finding-out-what-he’s-made-of footing.

Bale’s Miles has just enough manners to not tell off customers who don’t know how to drive the British sports cars they bought and that he services. He never loses his suffer-no-fools-gladly demeanor, even as he faces corporate shunning and other disappointments.

Mangold and his screenwriters didn’t make this movie just for gearheads and racing fans. Including Miles’ son Pete (Noah Jupe) lets Ken explain to him and the audience the danger, performance requirements and other tests of LeMans.

The racing sequences are low-camera-angle montages passing by at a whiplash-quick blur. Suspense builds, humor defuses it, and the thrills feel hard-earned, deserved and well, patriotic.

It stands with the greatest racing movies ever, and it’s certainly the most entertaining. But there is no doubt about one last superlative. “Ford v Ferrari” is one of the best pictures of the year.

MPAA Rating: PG-13 for some language and peril