Movie Review: In “Inside Game,” the fix is on

If you’ve never watched a sporting event that you weren’t sure was “fixed,” you’re probably not much of a sports fan. Things happen on the field, in the ring and on the court that go beyond head-scratching and have you shouting at the TV or booing from the stands.

Three things figure into such conclusions, heated or not. First, the game, fight, etc. is in the hands of the poorest paid people involved — referees, umpires, etc. Second, there’s big money involved thanks to the world’s weakness for gambling. Money corrupts.

And thirdly, the folks who cover sports for a living are more interested in getting a shouting spot on “Around the Horn” than on the hard work of digging deep, querying the league or sanctioning body and law enforcement, ruffling feathers and exposing what “really” went on at Super Bowl XL, for instance.

“Inside Game” is a true story about what seems, on the face of it, the easiest sport to manipulate — pro basketball. There’s a long season packed with games the general public cares little about, leaving it to the gamblers who want to bet “the spread,” the winner and their margin of victory. The players are too well-paid to be easily tempted to toy with that (you’d think). But the referees? An extra foul/free throws awarded at the end, a little look the other way here and there, a motivated “whistle,” and they’re the folks in charge.

The right off-the-books, amoral guys, with the right referee, weren’t that obvious. And if the trio who came up with their “inside dope” scheme in 2007-2007 weren’t clumsy, drug-addled or just plain idiots, they might shaken the sport, the NBA and Vegas to its core.

It’s an “inside gambling” glance at addiction, greed and ethics — essentially a gloss on an age-old story of crooked guys who fly too high and get caught. But its big reach is taking a stab at corruption, the psychology of the addictive personality. And its big stumble is in fixing blame, carelessly tossing it about as if rot like this was ever “a victimless crime.”

That’s how “Baba” Battista (“MadTV” veteran Will Sasso, who was Curly in “The Three Stooges” movie presents it. He’s one guy among his circle of childhood friends who wound up a big time sports bookie, “a mover” (placing bets for high rollers who want to hide their action) with a veritable “war room” in his house — a desk surrounded by TV screens tuned to games and computer moniters logged into global betting sites.

He’s tipped by another suburban Philly friend-since-childhood and bookie, Pete (Nick Cordero) about “line moves,” the betting line on the point spread of particular games, has been jumping around just before tip-off with a suspicious frequency.

And together with their mutual womanizing pot-dealer pal Tommy (Scott Wolf  of TV’s “Nancy Drew” and “The Nine”), Baba tricks Tim into a meeting and arm-twists him into doing whatever he’s doing for others for Baba instead.

What Tim has is access to training rooms at the arenas, the inside word on who’s hurting who’s pouting, who won’t play well with whom, the sorts of things that tip the balance in a basketball game. He’s using that to place bets against the spread, and he’s doing quite well.

With Baba in charge, big money can enter this “sure thing.” Burner phones, with Tommy acting as the paid go-between, a mobster with money called “The Chinaman” (Reggie Lee) and “They’ll never catch us. TRUST me!”

Tommy’s voice-over narration presents these guys as blood brothers for life, bonded since childhood over team-oriented basketball. They have each other’s backs, he says. Forever, he says.

So even though Tommy’s short attention span for short skirts and “action” and getting a buzz on is a warning sign, Baba and Tim have a deal.

The corrupt-to-their-core nature of these guys means Baba won’t let Pete in on this action, that Tommy’s much-younger bombshell fiancée (Lindsey Morgan) doesn’t mean he’s giving up sexual hook-ups in nightclub toilets and that Tim will go any easier on ref colleagues who talk star players into giving them signed journeys as favors. He’s the hypocrite in the crowd. 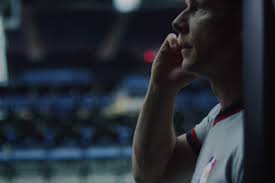 Actor turned director Randall Batinkoff doesn’t do much to sell the suspense, the rising risks and potentially deadly consequences that could come from these guys’ mistakes, unnecessary risks and callous disregard for planning ahead or anticipating trouble.

Sasso’s Baba jumps from beer and liquor to pot, “oxy” and cocaine — burning through cash and rubbing his nose incessantly as the stakes are raised. Having him do coke in front of “The Chinamen” and his henchmen suggests how careless he is, having him sniff and rub his nose — we GET it — in every scene is remedial, acting overkill.

Wolf’s Tommy should be funnier, the dolt with the attention span of a salmon who must absorb a phone “code” he’s supposed to use when communicating with the others. Yeah, buying a new Lotus is a great way to blend in.

Mabius has the most to play, a referee who is the son of a referee (Michael O’Keefe) who thinks he can stuff his pockets without actually getting his hands dirty.

None of the performances of these unlikable characters grab you, give the viewer a sense of what’s at stake and why we should care.

There’s also something very “Entourage” about “Inside Game,” both in the “guys from the neighborhood” group dynamic and the toxic sexism that the film practically embraces.

Tim is under pressure from his spendthrift wife (Julie Claire) to put their spoiled “gifted” (yeah, right) teen daughter in Bradenton, Florida’s most expensive private school.

Baba runs hot and cold with hot-blooded, shrewish wife Debbie (Betsy Beutler), who turns a blind eye to how he keeps their brood in upper middle class luxury.

And Tommy’s using every woman in sight the way his pothead girlfriend Stephanie is obviously using him.

It’s just sordid enough to make you feel a little dirty for having watched it, even as the many explanatory scenes, showing the way “the line” can be manipulated, make you leery of ever placing another wager on sports, or even of trusting the various leagues to ensure the integrity of their contests.

There’s too much dirty money involved and too little interest from law enforcement on the sports journalism “jockocracy” to simply take their word for it.

MPAA Rating: R for language and drug use throughout, and some sexual content