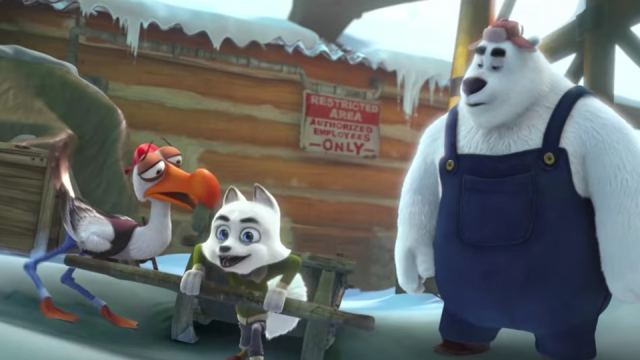 Competently animated — OK, competent “ish” — and heartlessly scripted, “Arctic Dogs” plays like an Entertainment Studios production not written and drawn so much as engineered, contrived by market necessity.

Give theaters something animated to drag kids and parents to in between Pixar, Dreamworks, Sony, Laika and MGM (“The Addams Family”) releases.

Terrible? Kind of. “Joyless” is much more apt, though. That’s usually what you get when you try to fix an awful animated script by hiring big names to read it into a microphone for your cartoon.

Jeremy Renner voices an Arctic Fox who dreams of being “Top Dog” in the Arctic Circle overnight delivery business. Michael Madsen voices one of those delivery huskies.

“Swifty” the white-camoflaged and too-tiny-to-pull-a-dogsled fox is consigned to package sorting at ABDS, Artic Blast Delivery Service. His boss, Magda the Moose (“I am CARIBOU!” she hisses in an Anjelica Huston Russian accent) will never let him move into deliveries.

Until that day all the huskies quit. Actually, they were dog-napped. And it’s not until Swifty realizes the red fox he crushes on (Heidi Klum), an inventor, has been taken that he figures out that they’re all being held in an evil Doc Oc styled walrus (John Cleese) in his self-described “lair.” Evil walrus has minions — puffins — and a big mouth, barely concealing “the secret of my nefarious plans.”

Swifty may be “just a fox” to the other residents of Taigaville, where “the only thing I’ll be remembered for is not being memorable.” But he’s on the case, and PB, his Polar Bear pal (Alec Baldwin) might help, even if dimwitted slacker-albatross Lemmy (James Franco) can”t.

There’s precious little action, and beavers with Italian accents, weasels with German and French ones (“Vive l’resistence!”) and zero laughs spread over 92 minutes.

As I said, “Joyless.” Any questions?

MPAA Rating:PG for some mild action and rude humor