Movie Review: Convicts learn empathy from horses in “The Mustang” 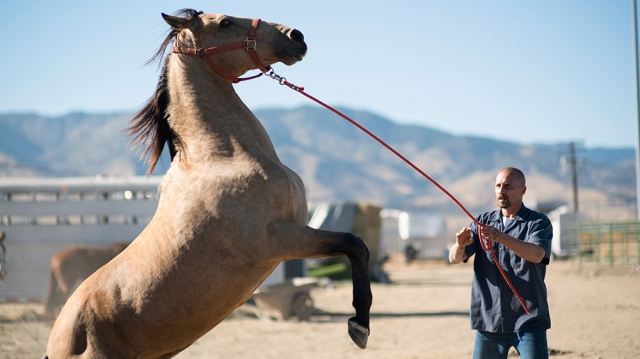 Sometimes it takes a fresh set of eyes to see the harsh beauty in something that’s become commonplace, or at least over-familiar.

Documentaries such as “The Wild Inside” and “The Wild Horse Redemption,” and endless TV news magazine feature stories have frequently re-acquainted Americans with programs in the Western United States’ prison system program of rehabilitating hardened convicts by having them train wild mustangs.

But it took a French filmmaker and Belgian star to create a story that’s stark, intense and beautiful out of that.

“The Mustang” stars Matthias Schoenaerts, the rugged romantic of “Far from the Madding Crowd” and “The Danish Girl.” Here, shorn of most of his hair and his air of romance, he is Roman Coleman, a hard man doing hard time in Eli Penitentiary in Nevada.

When we meet him, and long after we’ve met him in Laure de Clermont-Tonnerre’s spare, minimalist tale, he comes off as a walking balled-up fist. The tension is in his eyes, the rage in every tattooed step, gesture and look.

Roman has impulse control issues and anger management issues. A no-nonsense counselor (Connie Britton) isn’t scared, even when he twitches and lunges at her word association quiz. We’re scared for her, though.

“I’m just trying to find out what is important to you,” she says, grasping for some sort of verbal response from this stoic thug.

“I’m not good with people,” he confesses, finally. Well scary guy convict, you just might be in luck.

That “outdoors” work crew he’s put on earns him a pitchfork. Somebody’s got to to shovel the manure, the old man in charge of the prison’s wild mustang rehab, growls. He’s played by Bruce Dern. Every word out of his grizzled mouth is a twinkling growl.

Roman is curious at the furious, buckskin-colored stallion pounding at the walls of the isolation shed he’s imprisoned in. Roman feels his pain. A man of violence himself, he knows what solitary confinement can do to you.

That curiosity will change his life. Boss Myles (Dern) says, “You’re in the program…if you can stay in there (the corral) more’n five seconds.”

Thus begins a long journey from violent mistrust and hostility to empathy. That’s what killers and other violent offenders learn, not so much from the prison’s group therapy counseling programs, but from looking an animal in their care in the eye and finding compassion and common ground.

We’ve seen the stallions rounded up off Federal lands, a culling of the herds that extend over the West, with those captured to be trained by convicts and auctioned off to pay for the program’s costs.

Roman has six weeks to go from punching the horse — an ugly, frantic scene full of rage and blows (the horse punches back) — to loving it, from rejecting counseling to embracing it, from keeping his pregnant daughter (Gideon Adlon) at a distance, to reaching out to her to mend the wounds that they share. 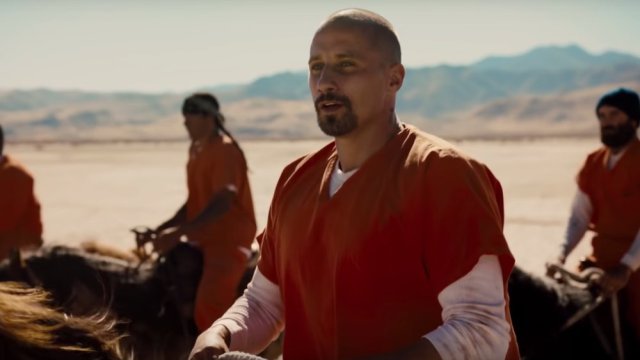 So much about “The Mustang” is conventional and predictable that the real marvel in Clermont-Tonnerre’s film is how much she is able to move us, even without much in the line of surprises.

She uses silence, limited Schoenaerts’ dialogue, letting us hear his furious breathing in the presence of that therapist/evaluator, which echoes the equine panting of the horse.

We’re treated to long takes of the training, with Roman getting trained even more by the horse, mainly by veteran convict-trainer Henry (Jason Mitchell of “Straight Outta Compton, adorable here), a joker and sometime drug dealer (horse drugs).

Which of course, is EXACTLY what Roman does, something Clermont-Tonnerre captures in big, quiet close-ups.

This horse and that convict have to “get in sync,” old man Myles instructs. But we can see they’re already exactly alike — afraid, bitter, angry and prone to lashing out.

Schoenaerts gives a performance of steel-eyed stares and clenched teeth, clenched fists, clenched everything. The transformation we know if coming isn’t over-sold or obvious, but Schoenaerts makes it moving. As for the man’s violent bonafides, a prison fight we see coming a mile away is as shocking and real as his consequences for it are shocking and unreal (he’s not punished).

Any director would have approached this material emphasizing the “freedom” the vast, open skies from the valley to the far off mountains, the beauty of magnificent horse flesh and the Old West ethos — become somebody other somebodies, including animals, can rely on — that drives this program in prisons all over the West.

But it took a French actress (“The Diving Bell and the Butterfly”) turned director to find the beauty, even in dusty thunderstorm, even in the terrified faces of the animals that the inmates have to calm and move to safety.

Clermont-Tonnerre never surprises with “The Mustang,” but in stripping the story to elemental visuals that tell a simple, touching story, she’s announced herself as a cinematic storyteller to watch.

MPAA Rating: R for language, some violence and drug content