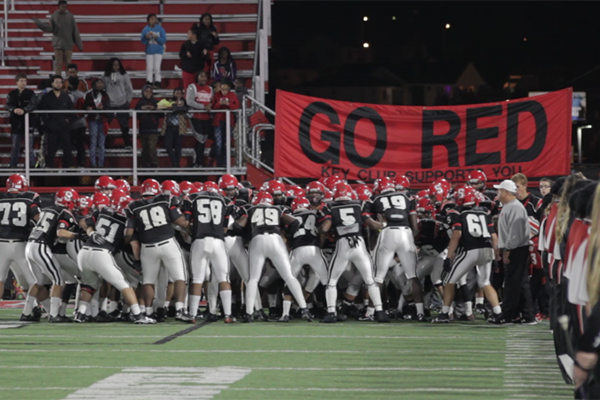 In the summer of 2012,  you could find its other source of pride and fame on a placard at the entrance to the local high school football stadium. Steubenville’s Big Red were 15-time Ohio state champions already, with titles dating back to 1925 and with their latest title as recent as the previous season.

But that opening image of the documentary “Roll Red Roll” is a warning sign of misplaced priorities and an avoidable tragedy to come, one that stains the city to this day. Because when we hear the word “Steubenville” now, we think of rape and jock privilege, of The Game that Ate America and how it took over the small town values that places like Steubenville are supposed to embody.

Director Nancy Schwartzman takes us into a crime, the investigation of it, the impact of reporting on that crime and the changing tides of local and national public opinion about what we used to call “date rape” in this gripping, disturbing and brilliant “anatomy of a rape” film.

She jars us not with that opening image of the stadium and the state titles, or with the dimly lit street scene she cuts to. It’s the “evidence” audio of chuckling young men that chills you to the marrow.

“That girl…what did they DO with that girl?” “She is SO raped right now!” These kids use the term “Dead Body” with contempt, its meaning almost instantly obvious even before the word “trained” pops up.

No, the victim didn’t die here. Her innocence did, and her reputation. These jocks were using their slang for a girl so drunk she has passed out, which the predators among them see as an opportunity.

“If that gets around, then you might go to jail.”

We see the frantic, angry and despairing text messages from the victim “Jane Doe,” the next AM — “Who did that to me?”

Schwartzman settles in to answer that question, tracking first the maligned (perhaps unfairly) police investigation, the football team and school system’s response (inept, culpable), the reporting on a story that ended with an Anonymous hack that turned “The Steubenville Rape” into a cause and a scandal that spread around the world.

We see Detective J.P.  Rigaud grill teen after teen, participants in the August 2012 evening’s parties that point us toward what happened.

“I need to know everything from you, from Saturday night through early Sunday,” he tells every girl and boy that sits down in front of him.

“We kept tryin’ to tell her, ‘You don’t want to go with them.,” one girl recalls. “‘You wanna go with back with your friends.’ We knew she’d be safer with us.”

But the victim was an outsider, “not a close friend” one witness admits, apologizing for not taking the extra step of arm-twisting Jane Doe into staying with the crowd.

What we’re watching is the police doing the right thing, taking the accusation seriously, methodical justice being served.

Then the story’s digital component moves to the fore, totally out of police control. One of the accused, quarterback Trent Mays, texts and complains and pleads with the victim.

Local sports talk radio gives the first hint it’s heard something is up, but won’t go any further.

But one person who does is blogger, activist and Steubenville native Alexandria Goddard. Whatever the police are piecing together, seizing phone after phone of the accused, bystanders and the victim, Goddard is skilled enough to find online — names of players, their social media clues about where the parties were, Twitter accounts and deleted tweets, Instagram and other online revelations from a generation that is living its life on line in a tone-deaf teen bubble of no privacy, amorality and gossip.

And what Goddard pieces together at Prinniefied.com becomes the megaphone that turns this tragedy into a story and that story into a cause.

Schwartzman interviewed Goddard and lots of townsfolk in painting her picture not just of a crime, how it was investigated and how it was revealed to the world. She captures the climate where this sort of thing was tolerated or at least swept under the rug — not just in Steubenville, but in America at large.

The kids had no clue what they were perpetuating with their “When are these hoes gonna learn?” comments, damning photos, their drunkenly amoral commentary on what they heard had happened or was happening as they taped their evening of beer pong and bad decisions.

Goddard tears up at how this girl — named on Fox and other less rape-sensitive cable news channels — was not just assaulted, but “humiliated” by her peers. Schwartzman lets us marvel at how Goddard’s digging through Twitter archives shows “It was ALL out there”  — comments, attitudes, excuses, accusations and photographs  — of a drunken teenage girl, a “dead body,” being dragged to and fro.

Screen captures don’t lie. One teen creep jokes “Song of the night is definitely ‘Rape Me’ by Nirvana.” A sentient adult is left aghast. Who RAISED them?

For her trouble, Goddard was sued even though “all I did” was post their handiwork, “their own words.”

We hear the victim being poor-mouthed, for her clothes, for her own behavior. And we hear talk radio “covering” it, letting callers vent and criticize her for what the host wants to call a “He said, she said” situation.

One name I didn’t catch was that of an utter idiot talk show host declaring “It’s easier to tell your parents you were raped than ‘Mom, Dad, I got drunk and decided to let three guys have their way with me.'”

He might have daughters, but he hasn’t got a clue.

Goddard may have thought she knew the town she grew up in and figured that others would be as shocked as she was by this “rotten onion” she was peeling. But she took the brunt of the heat as other news organizations (the Cleveland Plain Dealer newspaper) only later took up the story.

“Is this football town putting its daughters at risk by protecting its sons?” was the question Plain Dealer reporter Rachel Dissell asked.

And Goddard couldn’t have foreseen that this “entrenched football culture” town was about to be laid bare for the world to see how screwed up its priorities were. We catch  defensive, buck-passing school superintendent Mike McVey on local TV, and are treated to the police interview with Reno Saccoccia, the defend-his-players-no-matter-what football coach. Det. Giraud has to open the man’s eyes by explaining legal rape and consent to someone whose bigger concern seemed to be that his players were out drinking.

And then The Hive — the Internet’s collective mind and some say “Outrage Machine” takes up the story as Anonymous unearths the videos that left the world shocked. Protesters started turning up in Steubenville, demanding justice that apparently was being served, if just too slowly to calm the outraged.

There’s a lot to digest in Schwartzman’s film, from the role football plays in remote, dead-end towns like this all over America — a way out for some kids, a “fraternity for life” for those who stay behind — to the shocking speed of change in attitudes about consent and rape that this case hastened by bringing them into the light.

I was most impressed by its recounting of a lonely unpaid citizen journalist’s quest to get the facts out there (“tried and convicted online” or not) and tell a story the town didn’t want to hear. If we sense that Steubenville was changed by this, even reluctantly, that mostly comes down to Alexandria Goddard.

Schwartzman has made an utterly riveting “true crime” film and an eye-opening updating of the “How I Got that Story” tale, simply letting events unfold on camera in pretty much the order they did in town. “Roll Red Roll” is a terrific use of the documentary form.

If you miss it in cinemas, “Roll Red Roll” is coming to PBS on June 17, kicking off another season of the documentary series “POV.”

Credits:Directed by Nancy Schwartzman, script by . A Together Films/PBS POV release.