Movie Review: “Tyrel” has a hard time fitting in 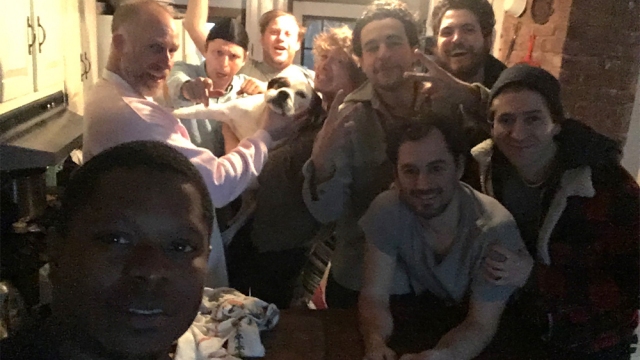 “Tyrel” is “Get Out” without the vast White Wing Conspiracy.

Take away the implicit threat, the science fiction satire of importing while souls into African American bodies and you’ve got a modestly disturbing story of not fitting in, of a majority culture making a minority among its ranks uncomfortable, maybe imposed upon.

And it all happens while “they” aren’t even aware it’s happening.

Chilean-born writer-director Sebastián Silva (“Nasty Baby”) gives us an intimate mumblecore (lots and lots of talking) allegory about the struggle to maintain your identity when everything around you seems to subsume it.

Tyler, played by Jason Mitchell of “Straight Outta Compton,” needs to get out of the holidays drama going on with his girlfriend and her mother. So he joins friends John and Nico (Christopher Abbott, Nicolas Arze) for a party weekend in the snowy Catskill Mountains.

Nico is a house flipper, and he’s filling this big, older weekend home with friends to help Pete (Caleb Landry Jones of “American Made”) celebrate his birthday.

But the first sign of trouble comes when Tyler and John run out of gas. The very friendly neighbor (Ann Dowd of “The Handmaid’s Tale”) sees them pushing the car, and in the FRIENDLIEST and most helpful way — asks a LOT of questions. Especially of “Tyler.”

The guys meet up, arrive at their getaway, and there are more people here than Tyler counted on — five liberal white guys, ranging from the older, gayer Roddy (Roddy Bottum) to the loose cannon Pete are thrown together without enough beds, little privacy and a LOT of alcohol for a weekend bender.

“If you’re feeling the cold, you’re not drunk enough.”

Let the games begin. Literally. These guys are all about parlor games — picking slips of paper out of the hat requiring each to do Buffalo Bob’s “puts on the lotion” speech from “Silence of the Lambs” in a different accent; as the Nordic singer Bjork, for instance. Roddy takes offense at his pick, pretty much on Tyler’s behalf.

“Black accent? What does that even mean?”

When Tyler — and admit it, you’re thinking “Tyrel” is a more “black” name — cannot manage much of a black accent himself, we kind of cringe for him, and for the drunks who don’t grasp what they just did.

As the all-night carousing goes on, complete with REM sing-alongs, much more booze and  pot and endless invasions of personal space and impositions of forced bonhomie — even jerky Pete treats Tyler as a close friend and takes liberties with that status — Tyler figures out pretty fast that this isn’t his scene, man.

And then the next day, MORE white guys show up. At least the gonzo cultural appropriator Allen (Michael Cera, a hoot) bonds with Tyler. He’s one of those 30ish dudes who has absorbed enough black culture to be the token black guy at even the whitest of gatherings. Of course Tyler feels a hint of kindred spirit in him. Allen insists on it, and in his mind, bringing a Donald Trump piñata seals the deal.

Or maybe it’s the booze talking. “Truth serum” may not help when you trying to drunkenly correct somebody’s staggering Brazilian capoeira (martial arts) demonstration. It doesn’t help much at all as Tyler feels more isolated, threatened, in manhood and identity terms, as the weekend goes on.

Silva doesn’t deliver explosions, here. As in life, things turn cringe-worthy and a sharp edge or two is revealed and the “party” goes on too long for everybody, or anybody (especially the host) to have a good time.

But he finds a third act surprise or two, and Mitchell makes a compelling overmatched hero, a black man grasping for lifelines, somebody who might reflexively have his back — in terms of racial identity. And if he’s getting that from Michael Cera, you know he’s had too much to drink.

Credits: Written and directed by Sebastián Silva   A Magnolia release.