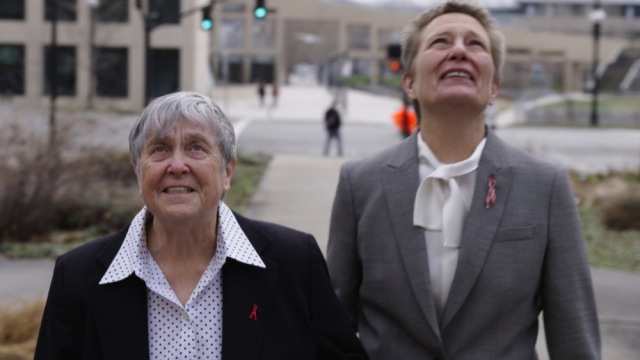 As AIDS swept across America in the 1980s, the country and its many distinct subcultures were sorely tested in figuring out how to confront it.

Confusion and misinformation, prejudice and superstition, genuine fear and revolting callousness all bubbled up during the disease’s deadliest early years.

The culture wars got wrapped up in a public health crisis and all manner of “not discussed in public” subjects burst into the light.

The main battlegrounds of this war have been carved into history — San Francisco, New York, Atlanta’s Centers for Disease Control, remembered and documented in films such as “And the Band Played On,” “Silver Lake Life,” “Threads,” “Positive.”

But what about Utah, with its Mormon heritage and Church of Latter Day Saints hostility to homosexuality? Yes, “Angels in America” announced from the Broadway stage that gay Mormons do exist and did it decades ago. Still, how did a state that back then and later went on to stealth-back California’s infamous “Proposition 8” “(“Prop hate”) cope

The neglect, bigotry and contempt were as bad as anywhere in the U.S., with LDS officials openly inveighing about “The Gay Plague,” some families believing “their sons got what they deserved” and almost everyone forced to choose between embracing a doomed child or throwing in with their faith and the state legislature giving voice to crackpot, inhumane gay “leper colony” ideas, bans on marriage for people suffering from AIDs, almost daily.

“Quiet Heroes” is a documentary that remembers that time and those extremes, but celebrates a handful of almost angelic healers. We meet a lone infectious diseases specialist, her physician’s assistant and recall the Catholic Hospital and its heroic nurse-nuns, all of whom created “an island in a sea of fear” in Salt Lake City in the ’80s and 90s.

Utah State Senator Jim Dabaki remembers taking friends (he’s gay) for treatment and being ordered out of waiting rooms. Dr. Kristen Ries faced a circumscribed practice, thanks to her willingness to take on a disease that sent her nothing but the dead and dying, and sometimes infectious, for 15 lonely years when nobody else in the city was willing to fight the unfolding disaster.

The nuns of Holy Cross Hospital eschewed social judgment (hard for most to do, back then) and took in the sick, comforted them when in many cases, even the patients’ families would not.

Filmmakers Jenny Mackenzie, Jared Ruga and Amanda Stoddard talk to survivors, show home movies and archival TV footage of dead activists and simple, unheralded human victims of disease. A psychotherapist (Paula Gibbs) bluntly describes the work all of them faced back in the deadly ’80s — “We helped them die.”

Ballet dancer now Ballet West director Peter Christie tears up as he remembers Dr. Ries and PA Maggie Snyder “never wore rubber gloves…they would touch your face, give you hugs” as a time when understandable fear kept laymen and women from doing that, and less understandably, doctors who should have known better avoided it.

“Quiet Heroes” packs a quick AIDS history into its 78 minutes, marking the benchmark moments in treatment — AZT in 1987, the “triple combo” of drugs, protease inhibitors, that finally bought victims remission and their lives back (1995). This is not new material, just a reminder of what happened.

Mostly though, the film (premiering on LOGO Aug. 23) touchingly celebrates physicians who take their calling seriously, and with compassion, even as it recalls how far we as a culture have come in the 37 years since AIDS was discovered. It makes us flinch at how publicly, fearlessly wrongheaded some people were, and not that long ago, either.

And Holy Cross Hospital? They lost so much money fighting this humanitarian public health crisis they had to be sold, with new owners eschewing the doctor, her patients and the practices that made the institution famous.

No compassionate viewer can hear that news and not think, “That’s the most righteous use of red ink, ever.”