Movie Review: “As Above, So Below” is a real shaky-camera headache 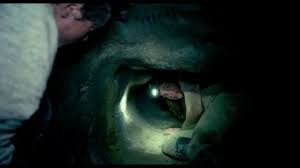 They’re going to have to start issuing licenses to all these filmmakers who insist on shooting their movies in the shaky-cam “found footage” format. Maybe have the “Blair Witch” guys and Oren “Paranormal” Pelli sign those licenses. Because something needs to be done to limit this explosion of cell-cam/security cam/nanny cam and GoPro footage that’s dominating the Horror Hit Parade.

In a “Last Crusade” prologue, “urban archaeologist Scarlett (Perdita Weeks) videos herself sneaking into Iran in an attempt to poke around some caves before the superstitious government blows up some priceless piece of human history.

“His quest was a path to madness.”

But she is nothing if not single-minded. She finds evidence of this “Philosopher’s Stone” talisman he was looking for, and surviving the demolition of the caves (shaky/dusty cam), sets out to Paris to finish his search for the alchemist’s ultimate prize — a magic rock.

She picks up a videographer who wants to make a documentary about her , Benjy (Edwin Hodge), her old translator pal George (Ben Feldman) and a trio of French spelunking punks, let by a guy who calls himself Papillion (butterfly), played by Francois Civil.

Scarlett puts on her best French weave see-through off-the-shoulder sweater, and they’re off, with Papillon leading them to the unknown corner of the ancient French burial chambers, where six million dead Frenchfolk are entombed.

“As Above” takes forever to go below, and once there, another long while passes before supernatural stuff starts troubling their trek. Papillon warns the bloody tourists, at every turn, to avoid passing through the wrong Catacombs.

“Which ones have filled with water? Which have collapsed? Which are EVIL?”

Scarlett an intrepid Brit, is heedless. George, afraid of caves and Benjy, not thrilled to be amongst all those bones. are dragged along by her force of will. And then its “This is WRONG” and “This is a BAD idea” as cadaverous faces are glimpsed and other inexplicable things happen, which they don’t stop to explicate.

The performances are perfunctory, the rising tide of fear they should all be feeling is limited to Benjy’s single claustrophobic panic attack. That’s the only compelling, human moment the players manage in all this.

It’s more unpleasant than scary, and ever so slow in getting up to speed. The Dowdles’ “Quarantine” was one of the better films of the “Found Footage” era. But they made that six years ago, long before this format had been beaten and shaken to death. With “So Below,” their license to jiggle, toss and turn the camera should be suspended.

MPAA Rating: R for bloody violence/terror, and language throughout