Movie Review: Shia shakes off the conventional with “Charlie Countryman”

Posted on November 11, 2013 by rogerinorlando 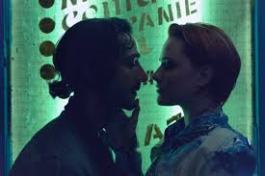 Here’s what Shia LaBeouf has been up to since finishing his turn in the “Transformers” franchise.
He made “The Company You Keep,” a modestly-budgeted high-minded thriller with Robert Redford.
There was “Lawless,” the Prohibition Era moonshining action picture with Tom Hardy.
He’s in the melancholy Dane Lars Von Trier’s “Nymphomaniac.”
And now there’s “Charlie Countryman,” a modestly ambitious psychological thriller with a romantic streak. Not a “safe” star vehicle in the mix. So give the kid some credit for guts and ambition.
Charlie (LaBeouf) is on hand to watch as his mother (Melissa Leo) is taken off life support in the hospital. But she’s not done teaching him.
“I sure didn’t mean for you to be running out on death scenes,” her ghost lectures him.
“Just this once, tell me what to do.”
“Go to…Bucharest.”
Is she sure? He isn’t. Nor is anybody else, such as his ex (Aubrey Plaza).
“You don’t mean Budapest?” It’s a running gag in the movie.
The Hungarian capital is cute, touristy. The Romanian capital Bucharest, as Charlie quickly learns, is something else. He meets a charming old Romanian Cubs fan on the flight over. The old man jokes around with him, dozes off, and dies. He, too, communicates with Charlie post mortem. Give this hat to my daughter, tell her this phrase in Romanian.
Charlie is tased, arrested and hassled to beat the band when he does. Even if that daughter, Gabi (Evan Rachel Wood) is worth the trouble, this is the other side of Romania — thuggish, confrontational, callous. The ambulance carrying the old man’s dead body crashes because the driver is a reckless jerk. And the shady men who know Gabi (Mads Mikkelsen, Til Schweiger) are menacing in the extreme.
“God knows, it can all turn into blood in the blink of an eye,” Viktor (Mikkelsen) purrs.
On the other hand, there are the amusing Brit stoners (James Buckley, Rupert Grint) Charlie meets at the youth hostel. They’re all about popping pills and voting on what “shared hallucinations” they all should have in this Eastern Bloc Sin City.
Music video vet Fredrik Bond ably shows off the seamy side of Bucharest. But the script is too reliant on coincidences and showing the insane lengths Charlie goes to in order to prove how smitten he is with the beguiling cellist, Gabi.
LaBeouf is less manic and boyish here, giving a performance stripped of the smart kid patter of much of his work. He does less with more, even as he’s taking ferocious beatings.
Wood, slinging an accent, is well-cast in any role that demands jet-black eye makeup and a wounded scowl.
The bad guys really stand out, with Mikkelsen pulling off something he never managed as a Bond villain. He’s genuinely frightening.
“Charlie Countryman” is not a graceful movie, with hints of characters trimmed down, themes launched (talking to ghosts, Charlie’s fearful inability to love un-established) and abandoned.
But it works well enough. And it’s a fascinating shot in the dark for a star who is making interesting choices with his stardom, and going to exotic places as he does.
Even if he meant to go to Budapest.