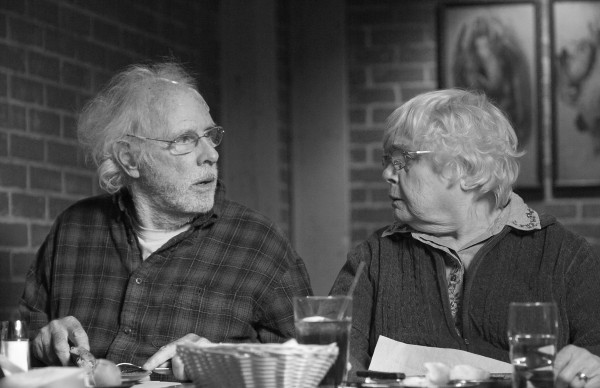 Dylan Thomas taught us all we ever need to know about old age, death and dying.
“Rage, rage against the dying of the light.”
Woodrow “Woody” Grant makes his rage a quest. He’s 80ish. He’s gotten a letter in the mail that tells him he “may have already won” a million bucks in a magazine sales sweepstakes. And by God, he’s going to get from Billings, Montana to Lincoln, Nebraska to collect it.
“They can’t say it it if it’s not true.”
There’s no talking him out of it. His son tries.
“You haven’t won ANYTHING.”
His wife nags — “You dumb CLUCK!”
And since he’s too feeble to drive, there’s nothing for it but to give the slip to his doubting family. He’ll walk, in early winter, from Montana to Nebraska.
Alexander Payne’s bleak, brilliant and bitterly funny “Nebraska” begins with the image of Woody, played by Bruce Dern in a spot-on, shambling, performance, trudging down a highway in wintry Billings. The cops pick him up and we meet his long-suffering stereo-salesman son, David (Will Forte, terrific).
We meet Woody’s shrill, cranky wife (June Squibb, who steals the movie).
“You know what I’d do with a million dollars? I’d put him in a home!”
David agrees. But from the start of this story to the end, David and we come to realize that it’s taken a lifetime of hardship, disappointment, trauma and drink to get Woody to this point.
“You’d drink too, if you were married to your mother,” Woody growls. He’s going to Lincoln”if it’s the last thing I do…I’m runnin’ out of time.”
The director of “Sideways” serves up another poignant and hilarious road trip comedy, with David — freshly split from his girlfriend — indulging his dad’s lunacy by driving him to Lincoln. Not much sense in stopping at Mount Rushmore. But a side trip to Mom and Dad’s old hometown, Hawthorne, Nebraska, pays comic dividends in this forlorn farce set along America’s “You betcha” belt.
Payne, working from a Bob Nelson script, lovingly sums up the milieu of thousands of dying little rural farm towns whose aging populations are still social enough to hit the Sodbuster Bar & Grill, but who long ago ran out of much to say to one another. Woody can’t help but share his good news with an old partner, a character so sharply played by Stacy Keach that he is small town venality summed up in one, neat, gregarious package. 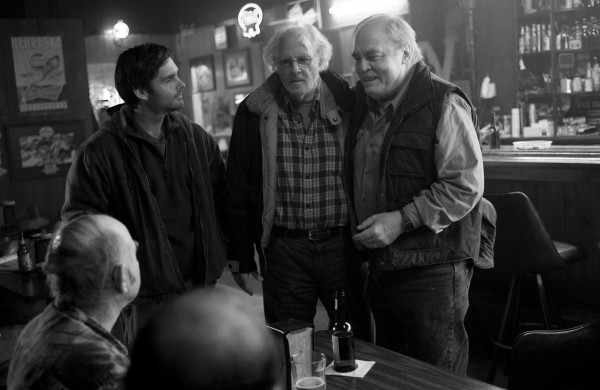 The old are sticking around towns like Hawthorne because it’s all they’ve ever known, and the younger adults we meet — a generation removed from the hard work of the farm — are trapped, overweight and just self-aware enough to be bitter about it.
David discovers dimensions to his stubborn, addled dad (“Beer ain’t drinkin’.”) and bullying, co-dependent mom. Bob Odenkirk plays the small-town TV reporter brother who doesn’t get to make the same internal journey David does.
And Dern, a great character actor who made his mark opposite everyone from Redford and John Wayne to Jane Fonda, embraces the role of a lifetime. He only occasionally lets us see the rascal he was through this disheveled, troubled, reticent wreck of a man. There might be an Oscar nomination for him in a movie that is, in every sense, a victory lap for a great career, a lap that circles and staggers from Billings to Lincoln, with every amusing or melancholy stop in between.

3 Responses to Movie Review: Dern, Squibb, Forte and Keach all shine in “Nebraska”