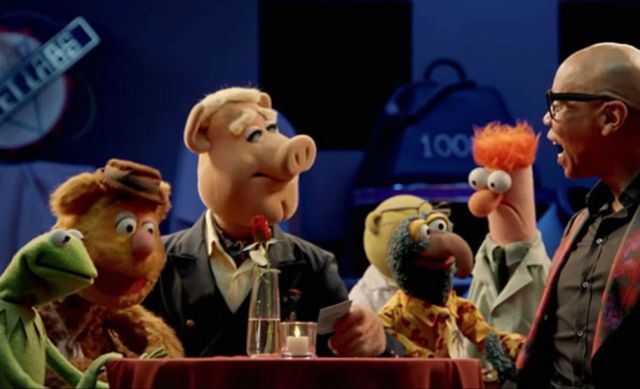 The Muppets return from that abortive “adult” mockumentary TV series Disney/ABC attempted a few years back with “Muppets Now,” a device-friendly Disney Plus series that won’t make anybody forget their 1970s heyday.

Which is kind of the idea. The original voices are gone, replaced by not-quite-funny imitations, which hamstrings the characters.

Kermit’s mood swings — enthusiastic cheerleader to dismayed impresario beaten down by the needy no-talents and diva puppets surrounding him — are missed.

Keeping in mind Disney has this valuable property and it can’t make a dime off nostalgia, let’s forget how genuinely tickled most of the guest stars on the original “Muppets Show” seemed to be, back in the day. The very process of acting and interacting with wise-cracking adults doing vaudeville shtick via puppets made Rita Moreno, Julie Andrews, Milton Berle, Pearl Bailey and Alice Cooper just crack up.

So it’s on to this new series, which begins with a video call each week as producer-Scooter confers with Kermit and dodges “notes” and pitches and pleas from Piggy and Fozzy, et al, for new bits and sketches as he drags and uploads each new episode to the network/streaming service.

It takes a while to reach that first “bit” that pops. A long while. Some performers never quite find a voice that suits the persona of the funny character they’ve taken over. Some bits are utterly dependent on the enthusiasm of their guest stars (some of whom return for multiple episodes).

Pepe the Prawn hosts “Pepe’s Unbelievable Game Show,” a zingy parody with “real” contestants and what sounds like genuine riffing by the Spanish-accented host (Bill Barretta). Pepe changes the rules of the “game,” willy nilly, forgets to introduce the contestants, and mispronounces the names when he does.

In a show of bits and bytes, this recurring sketch is the funniest, the one that works pretty much every time out.

The reinvention of Dr. Bunsen Honeydew (Dave Goelz) and his hapless victim/assistant “Beak-R” comes via “Muppet Labs Field Test” segments, where they explain (Hah!) concepts like “velocity” by catapulting pizzas into a wall. “Combustion?” You KNOW that’ll be “lit” (Genuine Muppet Joke).

Miss Piggy’s “Life Sty” segment must have “tested” well, because they keep coming back to it (Taye Diggs and Linda Cardellini are here for the early episodes) and the Pig isn’t as funny and the “hot yoga” and “slap massage” bits kind of flail in silence.

The “test audience” for the series is like the critics in the balcony of the original show. Nothing the wisecracking old grumps Statler and Waldorf  say or do is worth a rim-shot.

The Swedish chef’s “Okëÿ Dokëÿ Køøkin” segment is packed with promise. Bring in a celeb chef — Carlina Will or Roy Choi — for a competition with the nutty, incompetent Swede. The deadpan, stoic and “Swedish” nature of the character is tossed aside for these throw-downs. I guess even Swedish “ethnic humor” is out (not for Pepe, though).

The only one of these that I saw that worked had Danny Trejo going mustache-to-mustache over a molé cook-off. Trejo’s the rare guest star to really blast past the surreal and get into the over-the-top spirit of Muppet acting.

Sketch comedy is by its nature hit or miss. Adjusting for the “device” era in viewing habits means that double-take subtlety and wordplay take a back seat to big (ish) sight gags and the like.

Will a new generation discover the pleasures of a Fozzie the Bear joke?

“Why’s the chimney under the weather? He’s got a FLUE! Wocka wocka!”

Disney and Henson Co. might be on the right track with the Muppets. But judging from the early episodes, they may have to beef up the writing and deliver some blunt “notes” to the performers. For “Now,” they’re just not getting it done.

Credits:  A Disney Plus streaming release.

Running time: Episodes are @24 minutes each.

This site uses Akismet to reduce spam. Learn how your comment data is processed.