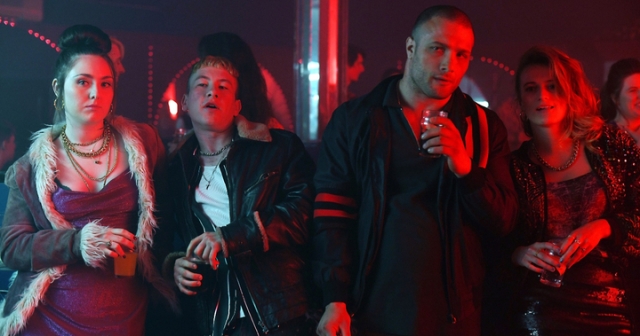 Cosmo Jarvis punches above his weight in the film that announces his arrival as a cinematic force to be reckoned with in “The Shadow of Violence.”

It’s a Tom Hardy-sized performance in the sort of role Hardy tackled early on, a walking muscle with a vulnerable streak, a violent man with regrets trying like hell not to add to them.

Jarvis (“Hunter Killer,” “Peaky Blinders”) plays Douglas “Arm” Armstrong, once a boxer of minor renown in his corner of Western Ireland. Now, he’s the muscle for the Devers family, which controls drugs and who knows what all in this remote, seemingly lawless town which anybody with any sense is looking to escape from.

Not really an option for Arm. The Devers, in the person of his punk-pal Dympna (Barry Keoghan of “Dunkirk,” “American Animals” and TV’s “Chernobyl”) need Arm to do their dirty work for them.

Dympna plies the big man with coke and orders him to “hoarrrt peepul.” When we meet him, Arm seems inured to his way and his job, “just a way a fella makes sense of the world,” he narrates.

When somebody doesn’t “stay on the right side of the Devers family,” he takes care of them.

This old drunk, Fannigan (Liam Carney), has drunkenly, accidentally or intentionally crossed a line or given the appearance of crossing a line with a Devers daughter. His sober protests notwithstanding, he gets the beating of his life.

But “the family,” in the person of the older gents who run things, isn’t satisfied.

Arm? He’s never been in “that business.”

“It’s time to get into that business, is what I’m saying.”

Dympna starts applying the drugs and the pressure. But Arm begins to let on he’s more than a punch-drunk lug, an insensate lout. Not a good time for that.

He’s got an autistic son his former girlfriend (Niamh Algar of TV’s “The Virtues”) wants to get into into a special school. She’s moved on, but she’s not above reminding him that this Devers business, “It’s not you.”

“I’ve been hearing that a lot, lately.”

Arm faces a moral choice, with dire consequences no matter what he decides to do.

The accents are sub-title-thick in the part of the world, as Arm takes his son to “the paaahhhhhhrk,” or joins him at a farm for horseback riding therapy.

Jarvis, who first gained notoriety for singing, takes pains to not let us over-estimate Arm. This thing he does? Literally just a job.

Then he allows us see how the drugs are controlling him, how the punk Dympna bullies and badgers and turns Arm into a “loyal” member of a family which will never regard him as blood. Arm is smart enough to have his doubts.

Keoghan makes Dympna smart but paranoid young man who keeps Arm close just so he can throw his weight around like a bigger man than he is. He may not have the killer instinct, either. But Arm won’t want to find out.

Algar has an earthy, pretty with high-mileage quality that is serving her well in working class Irish dramas. She suggests Ursula’s connection to Arm might have had more to it, back when he was younger. Now, she’s grown up and he hasn’t.

First-time feature director Nick Rowland makes the violence in-your-face and the scenes where Arm starts to struggle with it wrenching. Dude stages a mean Irish backroads car-chase, too.

The finale may have an inevitability about it, but Rowland, working from Joe Murtagh’s script based on a Colin Barrett short story, keeps his cards close and the mystery alive.

Will it be an Old West showdown, or something more Hemingway-esque that drives this man out of “The Shadow of Violence?”

Credits: Directed by Nick Rowland, script by Joe Murtagh, based on a short story by  Colin Barrett. A Saban release