It’s long enough ago that a lot of people don’t remember it. But Times Square wasn’t always a tourist haven.

New York used to be broke, and broken.

Vast stretches of New York City were wastelands, with nightly “insurance claim” fires in the ruins of the Bronx, “mob hits” dominating headlines, a time with rampant theft, corruption and drugs made those “I Love New York” commercials ironically hilarious in the early seasons of “Saturday Night Live.”

It was a town under “Mob Rule,” Netflix’s new series “Fear City” reminds us, a city where vast swathes of life were infiltrated by or outright controlled by thugs with more than their share of vowels in their last names.

“Fear City: New York vs. the Mafia,” is a slick, engaging, well put-together documentary series that neatly skims the surface of Federal efforts to bring down the Five Families who made up The Commission — the organizers who made “organized crime” a phrase all of America was all too familiar with.

Director Sam Hobkinson (“The Kleptocrats,” “The PM, the Playboy and the Wolf of Wall Street”) and the producers weave together a narrative of FBI surveillance and Federal prosecution strategies via interviews with agents and attorneys and made men from the mob.

Wiretap recordings and surveillance footage are sampled, damning threats and tirades about “severing his head” and how nobody crosses “the concrete club” are the foundation of this three-part series. Recreations of how those recording devices are planted are woven into interviews with the women and men who did the work.

Split screens and the lurid local TV coverage of this or that “hit” give the entire series a gritty late-70s, early-80s feel.

Surveillance photos are rolled out and treated as fresh evidence — visually — by marking them up with a grease pencil on camera, showing us THIS is the money shot in this set of prints.

In each episode, FBI agents and prosecutors talk of how insulated the murderers at the top were from the actual hijackings, extortion and contract killings that were done in their name.

The difficulty in getting close to these well-guarded, cunning killers and thieves is laid out — mansions that were “never empty,” “social clubs” where no outsider dared ever step inside — the Ravenite Club, the Palma Boys Social Club, the Bergin Hunt & Fish Club.

The painstaking process of building enough of a case to get permission to bug this club,  that “made man’s” Jaguar or Caddy, the Casa Storta Restaurant, is laid out.

But once that hurdle was cleared, the ball starts rolling downhill.

“It was like hearing a novel being read to you about the mob,” one retired agent marvels.

A lot of this detail will seem familiar to any mob movie or TV series fan, the pecking order from “soldiers” to “boss” within the hierarchy, the range of mob boss “types” — rotund cigar-chompers to “BUSINESSmen” like Castellano.

Like older men the world over, they loved their routines — this night we meet at that restaurant, BIG meetings we do on this afternoon at that “social club.”

I had forgotten the ways the mobs were interlocked, the “commission” that the Feds decided to prosecute, all at once. Even New Yorkers might not recall the degree to which the Mafia controlled garbage collection and construction, through union infiltration and concrete price-fixing.

Former Federal prosecutor Rudy Giuliani is here, both in the many clips of TV news coverage from the day, and in perfectly coherent if somewhat self-aggrandizing fresh interview done for the series.

It’s worth remembering this crusading Giuliani, who tends to get lost in his “reverse mortgage” TV ads, personal scandals and current deep involvement with a fellow who pops into the public eye just as the mob’s control of New York construction reaches its peak — Donald J. Trump. 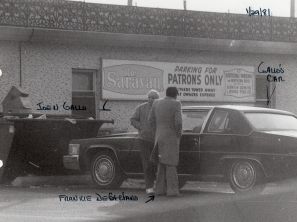 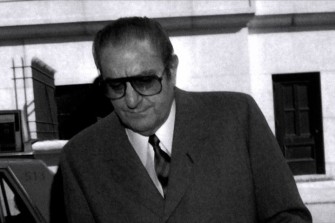 But unconsidered through ALL of this is the rampant corruption of the NYPD during this era, one of several reasons the Feds had to take over and run this case. The mob was too big, the cops too willing to look the other way. Frank Serpico’s story, a lone cop willing to speak out to the Knapp Commission, set up to (not that effectually) address the petty criminality that underlined the vast web of corruption, predated the years captured here. But little had changed.

And what makes one wonder if this is merely “season one” of this series are the revelations of mob control of concrete construction during this steel construction era, the far less heroic afterlife of Giuliani and his connection to the mob-friendly concrete-lover currently in the White House.