Movie Review: The horrific odyssey that is “The Painted Bird”

Translated from the printed page onto a black and white movie screen, removed from the heady “Eastern European novelist chic” of the Nabokov ’60s, and the kinky literary “freedom” of the age, Jerzy Kosinski’s “The Painted Bird” can be appreciated for what it is.

It’s an act of revenge, a child survivor of the Holocaust’s lashing condemnation of the Europe, especially Eastern Europe, that unleashed it — superstitious, prejudiced, sadistic and cruel, amoral moralists almost to a one.

A picaresque and gruesomely sensationalist child’s odyssey set along the Polish-Soviet frontier, it’s a wonder anybody ever gave Kosinski the license to pass it off as “autobiography.” No, he survived the war hiding in plain sight in relative safety and comfort. And yes, he was a fabulist who might not have gotten away with the literary license he was granted when he was plagiarizing “Being There” and the works that made him.

Adapting “Painted Bird,” Czech actor-turned-director Václav Marhoul (“Smart Phillip”) serves up a film of excesses; violence ranging from animal cruelty to torture and murder, sexual perversion that gives bestiality a try, characters whose most “noble” moments are not murdering the child, and teaching him to kill. And, at a nearly relentless two hours and 49 minutes, “Painted Bird” is an excessive test of patience and tolerance for the range of human depravity touched on.

Petr Kotlár is Joska, an olive-skinned “other” who lives with his aunt and is assaulted by the locals any time he ventures out. Here is your first escape point in “The Painted Bird.” We meet him as a gang of boys chases him through the woods, beats him and tortures his pet mink to death.

Either you commit to seeing “The Painted Bird” through, or you move on. Because it doesn’t get any easier.

His aunt dies, and he accidentally burns her house down in the bargain. There will be no succor in the village, where the hateful, toothless rubes mutter (in Polish) “He’s bewitched the cows,” “He’s the seed of the Devil!” But an old seer (Alla Sokolova) pronounces a different verdict, which is both a condemnation and his salvation.

This is the way of “The Painted Bird.” Joska, hounded and tormented, taken in by mentors all across this Hellscape.

Our first give-away to the era is spying a German observation plane. The front, when the movie begins, is far to the east, in Russia. But “the war” will return, with a vengeance, for the third act.

Joska will be taken on by a monstrous cat-fancying gristmill operator (Udo Kier), a catcher and seller of songbirds (giving the film its title) and an oversexed farm wench.

He will be “a gift for the Fritzes” (handed over to the Germans) but saved by the old Storm Trooper (Stellan Skarsgård) assigned to murder him, rescued by a sickly priest (Harvey Keitel, dubbed), passed on to another monster (Julian Sands), assailed by Cossacks and saved by the Red Army.
Barry Pepper plays a Soviet version of the sniper he portrayed in “Saving Private Ryan,” a lazy, unimaginative bit of casting that works.
Through it all, the child endures — fleeing a mob here, an awful living situation there — finally going mute at all he’s seen and survived. 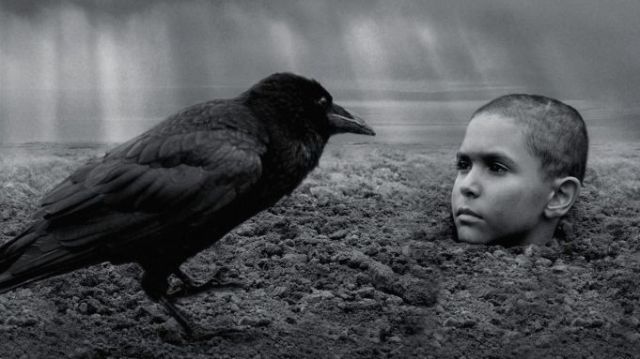 Marhoul set out to make an “unblinking” adaptation of the novel, and he succeeded. I won’t say the flat, limited-contrast black and white cinematography is a plus, because it isn’t.

Avoiding the obvious trap of having our hero narrate his saga just makes it harder to grapple with what is happening, and why. We work for that. It’s a movie of little dialogue.

But at some point, one has to get off the fence about “The Painted Bird,” and either embrace or “appreciate” it — at arm’s length. I opt for the latter.

Agnieska Holland’s dark and grim but somewhat lighter boys-journey-through-the-Holocaust film, “Europa Europa” (1990), based on an actual memoir, gets across the same points without the just-swallowed-acid aftertaste.

Hatred fatigue sets in — hatred for the awful people who eagerly participate in one “wilding” after another, mobbing and assaulting the little boy for being either a “Gypsy” or a Jew, and maybe a little hatred for Kosinski for his obvious loathing and heartless judgement for the heartless.

The humanity that emerges from this story isn’t humane. Perhaps the only way this over-the-top WWII “Inferno” really works is as an “explanation for how I turned out,” as autobiography. And as we now know, that’s not true.

But as a depiction of the dark sides of human nature, stupid and instinctively cruel? Look around you. The author was on the money, passing on a warning from “then” that is just as apt “now.”

MPAA Rating: unrated, graphic violence, animal cruelty, bestiality — an NC-17 if ever there was one.

Credits: Written and directed by Václav Marhoul, based on the novel by Jerzy Kosinski. An IFC release.