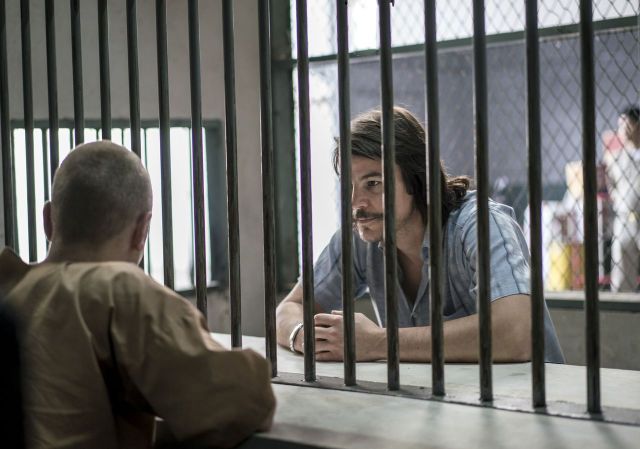 The producers of “Most Wanted” struggled over the title of their Canadian film “inspired by” the true story of a junkie and a reporter caught up in the fallout of a police drug sting that went wrong — VERY wrong.

“Target Number One” was its Canadian title, and that’s as vague as the one slapped on the U.S. release of this engrossing but messy true-crime/true cover-up thriller.

Twenty-five year old junkie Daniel (Antoine Olivier Pilon) is scrambling from gig to hustle to score. He once got some heroin from Thailand, once. Can he get some more?

The dealer he mentions this to (Jim Gaffigan) is also a police department “snitch.” Can you sell us the name of key member of the Thailand to Canada heroin connection?

A task force cop (Stephen McHattie) gets passed over for promotion. Can he justify his job and the budget he’s being given for what would come to be called “Operation Goliath” to the superior who just passed him over?

And a hustling Toronto reporter (Josh Hartnett), a star at the Globe & Mail newspaper who has added an investigative TV crime gig to his plate, needs to justify his two gigs to two bosses. Can he give them a big expose about “Goliath?”

“Sure. Fly me to Thailand.”

Writer-director Daniel Roby struggles and mostly-succeeds in wrestling these disparate agendas into a coherent narrative. Telling the story via two timelines — a “present” that is post-Goliath, and flashbacks that tell you how this player came into the mix, how that piece of the puzzle fits — we see hapless French Canadian Daniel Legner do what junkies do.

He moves around a lot, calls home trying to lie his way into some cash from his parents. Gas-and-dash fills up his motorcycle for a trip West. That’s where he tracks down a junkie who owes him money. That’s where he’s meets the guy on a boat, Glen (Gaffigan). Pilon is utterly convincing as a young man who should see the signs that he’s being set up, because there are many of them. He’s not making good decisions, and when the “dealers” you’re working with are the police, sneaking out of this entrapment is not an option.

Gaffigan is nobody’s idea of a “dealer” you wouldn’t make for a Narc. But the Vancouver charter fishing boat captain cover? That works. McHattie also seems miscast, but then — an older cop playing at being a drug buyer implies desperation on several levels.

Hartnett brings a convincing mania to the “job first, family second” reporter on the make. His interactions with various corrupt or covering-up police officials are fascinating even if his tantrums with TV or newspaper editors echo every journalism movie cliche under the Sun (or Globe & Mail).

Rose-Marie Perreault plays a pawn-shop under-the-counter dealer as a walking tattoo, one bad life decision after another advertised in ink and career choices. Amanda Crew is the wife and mother of a newborn upset at the risks her reporter-husband, Victor Malarak (Hartnett) is exposing himself, her and their baby to.

Cinematographer-turned-director (“Louis Cyr”) Roby makes it all coherent, as I said. But “tidy?” No. This story is a mess to wrap up, and he’s cluttered it up — justifiably, perhaps — in an effort to weave all the threads into a finished tapestry.

Giving equal weight to the four different points of view is one thing. Give us multiple timelines on top of that and you lose focus to the point where everything turns fuzzy. Focusing on the reporter and the junkie and narrowing the scope (shrinking the cop and informant roles) would have helped.

It’s still a solid “How it all went wrong” police procedural and a real eye opener who thinks cops only lie, cover-up and manufacture cases south of the Canadian border.

MPAA Rating: R for drug content, language throughout and some violence