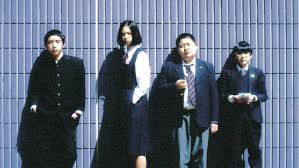 That’s “We Are Little Zombies,” a daft, candy-colored Japanese confection that is the epitome of originality, the definition of post-ironic irony and the next best thing to an underage drinker’s tour of Nippon.

Not that there’s underage drinking. There’s no time, what with all the shoplifting, car-jacking, ridiculing Japanese funeral rituals and “screen” and “schoolgirl” fetishizing,  referencing Kafka, all of it underscored by Puccini and Beethoven and burping Japanese video game themes, it’s the trippiest movie you’ll see this year.

There’s a whopping 15 minute prologue, a false ending with fake closing credits, a story told with seizure-inducing montages, stop-motion animation and video game animation as it riffs on Japanese homelessness and Japanese chat shows. You’ll feel your passport got stamped even if, by some chance your mind isn’t blown.

They meet staring at a smokestack. It’s a crematorium, and this quartet of thirteen year-olds have two things in common. Each has just lost his or her parents. And none of them feel a thing.

Bespectacled longer Hikari (Keita Ninomiya) is our narrator, a child whose parents gave him every video game and game-platform under the Rising Sun. He’s availed himself on them ever since he was old enough to use his thumbs. His folks? They “died on a stupid stupid stupid” package bus tour, killed on their way to an “All You Can Eat” wild strawberry farm, “so they went straight to hell.”

Rotund Ishi (Satoshi Mizuno) grew up in the family stir-fry karaoke restaurant, coming home one night to a “bright orange sunset” hours after the sun had gone down. The careless restaurateurs accidentally torched it.

Abused kleptomaniac Takamura (Mondo Okumura), Mr. “The more I steal, the less I have,” lost his parents to suicide.

And Iluko (Sena Nakajima) was forced to become a nine-fingered pianist by her parents, who were murdered by her obsessed piano teacher. “I’m a femme fatale,” she deadpans, spelling and explaining the concept as we see her teacher “come on” to her and her father “propose” to her.

They resolve to cut school and have “adventures,” start with a group grab-and-run in a convenience store, stumbling across a deliriously funny homeless jug band at the garbage dump. And that’s how “We are Little Zombies” become a band.

Writer-director Makoto Nagahisa’s debut feature is video-game-manic in execution, a tale told in short but numerous chapters identified as game “stages” (or levels).

And the social commentary is sweeping  and skewering. The “schoolgirl” obsession is such a cliche you can see it in many of the films of famed animator Hiyao Miyazaki, to say nothing of the costumes showcased in any red light district. The disaffected “screen addicted” generation is our four “little zombies.”  Nagahisa suggests how they turned out that way.

It’s so antic in pacing that when it finally loses steam in the middle of the third act, it’s almost a relief. There’s so much to take in, you almost miss Rinko Kikuchi, and two actors who starred in Jim Jarmusch’s deadpan “Mystery Train” over 30 years ago.

Not that this is about the adults. The kids are captivating charmers, even if they’re just playing “types.”

All these things — and more — considered, and I have to say “We Are Little Zombies” is the most entertaining thing to come out of Japan since sushi, “Iron Chef” and the Miata.

Maybe travel there is a dicey proposition this year, but watching “Zombies” makes for the kitschiest “package tour” of them all.