Posted on July 5, 2020 by rogerinorlando 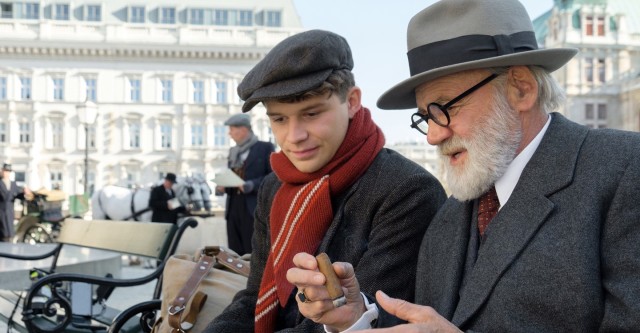 If “The Tobacconist” didn’t put veteran Austrian TV director Nikolas Leytner into therapy, he must be a stronger soul than we mere mortals.

He had a best-selling novel by Robert Seethaler as material, Vienna “between the World Wars” as his setting, a romance, the acquiescent German “takeover” (Anschluss) of Austria, Sigmund FREUD as a character and the great Bruno Ganz (“Downfall”) playing the Father of Psychotherapy.

And if Leytner didn’t utterly whiff it, he certainly kicked the ball straight into the goalkeeper.

Simon Morzé stars as Franz Huchel, a dreamy lad from Attersee  in the Salzkammergut, Austria’s mountainous resort region — sort of a Catskills for aspiring Nazis.

Franz loses himself in underwater reveries in the lake (Attersee) or the rain barrel outside the tiny chalet he and his mother (Regina Fitz) share. One stormy day, mom’s latest lover takes a lightning hit during a dip in the lake. There’s nothing for it but for the boy to go to Vienna and go to work for an earlier paramour of his mom’s.

He will learn the trade, human nature and more from Otto Trsnjek (Johannes Krisch), a one-legged WWI veteran who knows his tobacco and knows his customers.

A tobacco shop, he preaches, “is a temple of pleasure and spirit.” He sells “pleasure and desire,” and cigarettes and pipe tobacco and postcards, newspapers and magazines — some of which he locks under the counter.

But he’s a philosopher of cigars, with boxes of “Havanas” such as Hoyo de Monterrey, advertised as picked and cured by the strong farmers of Cuba, “rolled on the thighs of beautiful women.”

One of those customers is Dr. Sigmund Freud. Franz may have a hint of the provincial rube about him. But he knows all about Freud, apparently.

“I’m gonna buy ALL your books and STUDY them!”

Freud chuckles the way some shrinks do, and says “Get some FRESH air. Get a girl!”

Franz has one in mind, a sexy Bohemian fan-dancer named Anezka (Emma Drogunova). It takes all his nerve to ask her out. He is obsessed. He starts spending his salary on fine cigars which he gives to Freud in exchange for romantic advice.

Franz would love “to lie on your couch.” Considering what we’ve seen of his dreams, the way he fantasizes about what he’d LIKE to do — with Anezka, with her other suitors, with the Nazis all around them in an increasingly deplorable Vienna, so would we.

But “The Tobacconist” reduces Dr. Freud to Dr. Drew, or Walter Matthau’s Einstein in the romantic comedy, “I.Q” — a great mind talking about “girls” and the inscrutable nature of “love.”

Franz, who updates his mother on his life with letters and postcards, is a classic unreliable narrator. Is he really punching out a Nazi or romping naked, in the snow, with Anezka after a night of love-making? Or is it all in his head? 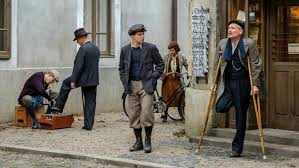 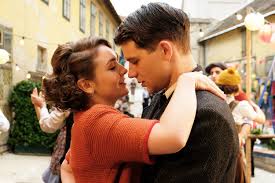 Leytner shifts points of view almost as often as he changes the film’s tone, from never-quite-romantic to harsh and murderously intolerant. Freud at home contends with a house full of women urging him to flee to London. Mother back in the Salzkammergut fends off men she might need for “protection” against “these rotten, rotten times.”

Franz comes of age. But for all his weird dreams and fantasies, even with Dr. Freud suggesting he “put pencil to paper and write down all your dreams,” he doesn’t have his psyche explained to him. Or us.

Ganz has a wonderful twinkle about him that makes him perfect for Freud. If only he’d had a little something to chew on. If only the character felt like more than a Big Name afterthought.

Morzé is undistinguishable from a hundred other callow lads “coming of age” in awful times, and the sensual Drogunova is trapped playing little more than a flighty, opportunistic dream date.

Krisch (“In the Fade”) stands out in this cast, giving a faded bravado to a man who has lost his best shot at love, lost a leg and is losing his country to ignorant bigots.

The title character is easily the most interesting element to “The Tobacconist,” which has so much going for it –dramatic times, lovely city (Munich doubles for Vienna), a fascinating historical figure as part of the milieu, that more’s the pity that it doesn’t amount to much.

But then, as the good doctor said, “Sometimes a cigar’s just a cigar,” it’s not titled “The Analyst,” is it?

Credits: Director: Nikolaus Leytner, script by Klaus Richter and Nikolas Leytner, based on the Robert Seethaler novel. A Kino Lorber release.  is