Movie Review: Olivia Wilde shows her vengeful side as “A Vigilante”

She gets the life-threatening menace across, just with a glare.

As the actress making this threat, in the guise of abused-woman turned avenger, is that skinny slip of a thing Olivia Wilde, that glare had better be lethal. And in “A Vigilante,” it is.

Wilde first gained great fame as the super-humanly beautiful, digitally perfect “Quorra,” in “TRON: Legacy.” And it sometimes seems as if she’s spent the intervening decade trying to rub that image right out of our eyes.

Movies like “Deadfall,” “Butter” and “Drinking Buddies” played up an earthier, if not always deadlier image. But if you’re tackling an indie American “Girl Who Never Got a Dragon Tattoo,” scary is part of the package.

Sadie is the sort of woman other women call. When we meet her, she’s sitting in the house of a mother cooking dinner, one arm in a sling. The overhead part of the phone call included “He’ll hurt them…if I leave” and a Kingston (New York in winter) address.

We’ve witnessed that woman (Betsey Aidem) help her husband get his coat on as he leaves in the morning. Again, she has her arm in a sling.

We’ve seen Sadie working herself breathless on a punching bag. And as the spaghetti bubbles on the stove that evening, she’s the one there to greet the abusive husband (C.J. Wilson) when he comes home that night.

Her orders are calm, firm and steely-eyed. He is to transfer his assets, put the house in his wife’s name, and following that “you will leave.”

He glowers. She glares.

Any hint of objection, any sudden move with the threat of violence is met with a karate chop to the neck. It happens mostly off camera (saving on fight choreography and sparing the actors the risk of injury). But the results are unmistakable.

Sadie beats the living hell out of him.

changing her looks with a wig and bright blue contact lenses

“If you bother her, or the kids, in any way, I will kill you,” she warns her bloodied foe as he sulks out the door. Followed by a whispered “I WANT to kill you.”

Wilde and first-time feature writer-director Sarah Daggar-Nickson have cooked up a strip mall/truck stop Lisbeth Salander for rural New York state, a female vengeance fantasy which, scene by scene, fills in Sadie’s back story, her self-trained bonafides (learning martial arts from books and videos), the big hole in her life that violence against abusive men can barely hope to fill.

Sadie has been doing this enough to have a modus operandi — contact lenses to change her eye color, dye or a wig to alter her hair, blue collar working clothes, black leather assassin gloves, a Honda coupe she keeps under a tarp in the woods.

She is covered in scars. Haunted. Manic panic attacks, at times, tumbling into paroxysms of grief.

“A Vigilante” is a film that revels in the icy quiet of a New York winter, the chilling testimonials of support group women giving details of what happened to them, how it happened, how it continues and the utter horror of it.

Sadie sits in these meetings at a shelter.

“We recognize that we have value…it’s how we got here.”

She isn’t sharing “your ‘leaving story,'” but we can guess she will.

She hits a redneck bar on the way home. “Well whisky, on the rocks.” No makeup, camo jacket and baseball cap, she’s still hit on. She’s pursued into the parking lot. But she expected that. Her pursuers/prey are about to get a nasty, bloody surprise.

Daggar-Nickson fills Sadie’s life with Spartan details — a TV always on, maps on the wall, the odd moment of dancing by herself, sleeping with a bayonet under her pillow. She’s still afraid of something, someone, and not just the men she’s beaten up. 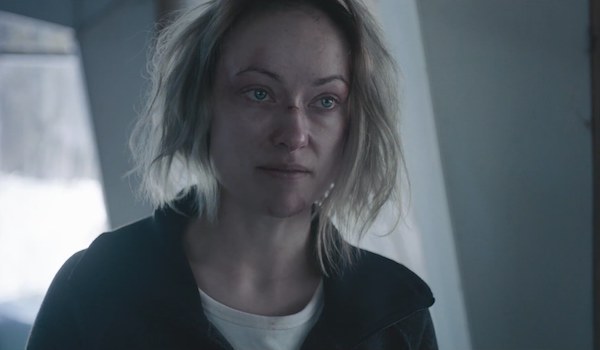 Even though she only reveals Sadie’s back story in the last third, the narrative Daggar-Nickson cooks up is familiar, predictable, even in the way it stumbles off track in the third act. She spares us the worst horrors — violence committed against children, the beatings that bring Sadie to a family’s door. Sadie is the one she doesn’t spare.

But Wilde gives this woman her all. We see her with every freckles and imperfection showing on her cover girl face. And in the couple of scenes that require fight choreography, she handles herself well enough to be convincing.

She puts this generic picture over with a performance that has baggage, damage, history and compassion packed into it — motherly concern for a child she’s just met, wearing the group therapy advice she took to heart and let change her life, advice the Swedish avenger Lisbeth Salander could have given her, dragon tattoo or no.

“You have to fight back. Even if it kills you.”