Movie Review: Pay good money for this and YOU’LL be the one in a “Captive State”

There’s a tipping point to how much editing a movie can sustain before it becomes visually incoherent. It’s a sweet spot in the modern, flood-of-rapid-fire cuts style that sits somewhere between say the Paul Greengrass (Christopher Rouse, editor) “Bourne” movies and the disorienting, dismaying mush of the action beats in the “Transformers” movies.

“Captive State,” a sci-fi thriller about Occupied Earth and starting a revolt against the alien invaders tends towards the “Let’s make a hash of it all” end of the spectrum.

When this sort of cutting is done right, it creates impressionistic action, a dizzying chiaroscuro of characters, plot and a movie in motion. In “Captive State,” it’s a substitute for character development, riveting plot, etc.

The editing ruins a serviceable — if nakedly foreshadowed — story and a properly gloomy post-invasion Chicago production design in a vain effort to make this seem trickier and more sophisticated than it plainly is.

Jumpy, hand-held camera pursuits of unnamed characters played by unfamiliar actors, chopped into tiny slivers of screen time, dark scenes chasing darker scenes, never quite settling on a hero or “hero’s journey,” it’s an intensely unsatisfying viewing experience. Even if the story’s easy enough to follow — again, the resolution is tipped with a BIG wink in the first act — the action isn’t.

Everybody calls the aliens “roaches,” but not to their um, faces. They’re insectoid, shape-shifting porcupine mantises who conquered the planet and persuaded world leaders to submit to an armistice. Humans are forced to work building alien habitats, which look like termite mounds, mining and shipping out the planet’s natural resources hustled skyward in alien spacecraft — which look like mud-dauber wasp nests.

The aliens prefer to be called “Legislators.” They rule every locality the world over, by proxy. Humans and “democracy” ostensibly are still in charge. It’s just that they take orders from below, where the aliens live.

A prologue shows a cop trying to get his family out of Chicago, and failing. His oldest son Rafael became a “resistance” legend, sacrificing himself in a slaughter in Wicker Park. The youngest, Gabriel (Ashton Sanders, of “Moonlight” and “The Equalizer 2”) has grown up to have a job in an electronics factory, a girlfriend (Madeline Brewer) and secret plans with his street-punk pal (Machine Gun Kelly) to flee “across the lake” to the north, and a chance to start afresh.

But the local Special Branch cop, Mulligan (John Goodman) keeps an eye on Gabriel, and on what he thinks is a still-active resistance “cell.” They’re passing messages, he realizes, via classified ads using the wings of a Phoenix as their symbolic signal.

We’re given proof of that cell, as unnamed characters played by James Ransone, Ben Daniels, Caitlin Ewald, Alan Ruck and others, are followed through byzantine plans to stage an “incident.”

There’s a hooker (Vera Farmiga) with a passion for Roy Cohn biographies, Trojan horse sketches and Nat King Cole records whom Mulligan leans on, and a boss (Kevin Dunn) who is the city’s actual go-between with the roaches.

We track Mulligan’s efforts, and Gabriel’s, and in a departure, we spend little time staring at the aliens and figuring out what they are, how they succeeded and how they can be defeated.

Those are details left to the Phoenix folks, and they’re not sharing.

Director Rupert Wyatt (Mark Wahlberg’s “The Gambler”) builds towards a false climax — “Soldier Field” — and stumbles as he drags us to the bigger climax, a frustrating slog through two more acts of “drama” and dull dialogue, arrests, etc., towards the big payoff. 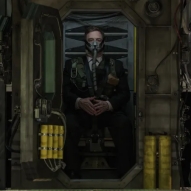 Goodman is a perfectly cagey and competent villain, but young Sanders seems to have suffered in the editing — a “no confidence vote” in his ability to carry a narrative.

The characters are under-developed —  pure plot devices, given little to humanize them and even less to say.

And yet, that said, “Captive State” might have achieved some sort of screen satisfaction had the straight-forward-with-obvious-twist script not been hacked into tiny image bites, rendering huge passages of it a confused visual mush.