Movie Review: “Holmes & Watson” get what’s coming to them 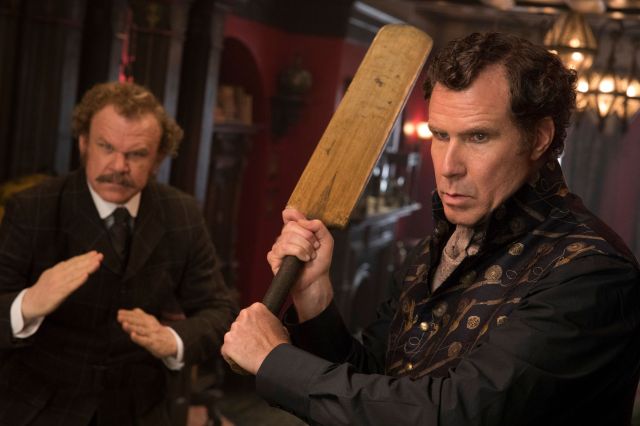 The third time doesn’t prove to be the charm for the funnyman pairing of Will Ferrell and John C. Reilly. The “Step Brothers” struggle to find much in the way of laughter in being the latest to send up that Victorian England smartypants, Sherlock Holmes.

Ferrell’s “Get Hard” co-writer/director Etan Cohen proves as comically out of step as his leads in saddling two of the cinema’s most reliable jokers to a gasping nag of a comedy.

He wasn’t the first to think of Dr. Watson (Reilly) as the true brains of “Holmes & Watson,” though perhaps he is breaking new ground in hunting for giggles in the Good Doctor’s offering of “Cocaine?” or “Heroin?” to Holmes (Ferrell) and those he and the World’s Greatest Detective enlist in their pursuit of Moriarty. That’s cutting edge comedy, there.

And the autopsy shared by Dr. Watson and “The Lady Doctor from America” (Rebecca Hall) turned into a send-up of the potter’s wheel scene in “Ghost” (“Unchained Melody” on the Victrola) kind of works — in a 1990s way.

It’s an old fashioned broad character comedy of the type Ferrell generally avoids, seeing what the genre did to earlier “Saturday Night Live” comics like Mike Myers. It’s more scripted than riffed, and the script is weak tea indeed.

We meet the adult Holmes as he practices his entrance to court, where he proceeds to find every excuse under the sun to excuse the accused Professor Moriarty (Ralph Fiennes, utterly wasted in a role with almost no lines and nothing to play) of his assorted crimes.

Moriarty is freed, to the fury of Inspector Lestrade (Rob Brydon). It’s only when a threat is delivered about destroying “a London marvel,” “changing history” and killing Queen Victoria (Pam Ferris) to boot, that Holmes springs into action. Not that he admits his blunder or anything.

Watson? He’s angling for “co-detective” status. And upon meeting The Queen, he goes to goo. They both do.

A corpse stuffed in a cake might contain clues, but Watson can’t examine it on his own. Dr. Grace Hart from America (Hall, game for anything that’ll get a laugh) will lead and he will assist.

“Does ‘DOCTOR’ mean the same thing in America?”

She is a pioneer in her field, and already makes “30 cents to every dollar a MAN makes.” 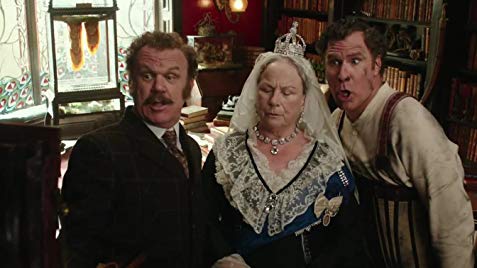 Cohen — and yes, this is pretty much all on you, dude — sends up the Robert Downey/Jude Law “Sherlock” films by having Ferrell’s dimmer Holmes graphically work out how he’ll best a brawler twice his size, defuse a bomb etc.

And he hires many of Britain’s best character actors to play unfunny bit parts — Steve Coogan as a one-armed tattoo artist, Coogan’s comic foil Brydon as Lestrade, Kelly Macdonald as Holmes’ housekeeper, Mrs. Hudson, Fiennes and Hugh Laurie as Sherlock Holmes’ smarter brother (another unfunny attempt at sending up Holmes had that title).

The prologue — Holmes and Watson in boarding school — almost works. The future detective was bullied, but clever enough to get every single other student expelled so that he’d have every teacher all to himself.

“Holmes & Watson” drags the Titanic (reusing footage from “Titanic,” and one of the stars) into Victoria’s reign, hurls a comic blast or two at America’s current president and takes shots at American junk food.

“Go back to America, with your ham-dogs and hot burgers!”

It’s just not funny. The material isn’t worthy of the great comic duo of our time.

Credits: Written and directed by Etan Cohen, based on the characters created by Sir Arthur Conan Doyle. A Sony/Columbia release.

1 Response to Movie Review: “Holmes & Watson” get what’s coming to them