Movie Review: You need “The Quake” to create to create “The Wave” 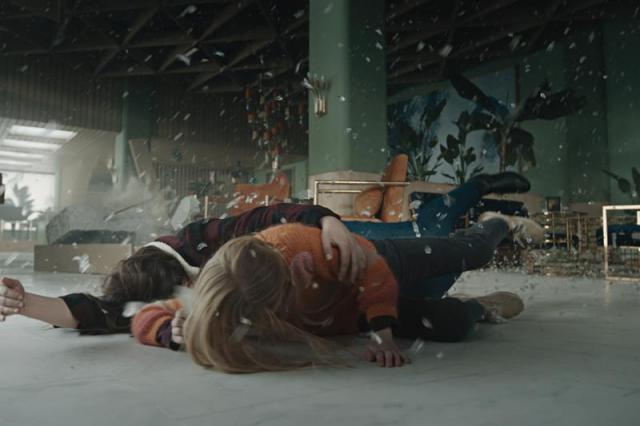 The rats know what’s coming. And the rats are running.

Kristian Eikjord (Kristoffer Joner) knows, too. And it’s eating him alive, given him the shakes and generally wrecked his sanity and his life.

Kristoffer’s a Norwegian geologist, the hero of “The Wave,” a Cassandra who warned that a tidal waves — tsunamis — in fjords were totally a thing and spent half the movie warning everybody and the other half dashing hither and yon to save his family.

Now it’s a year later, and Kristoffer has the shakes, much like the country he calls home. “The Quake” is coming. He just knows it. His marriage to Indun (Ane Dahl Torp) is done and even a long visit by his tween daughter (Edith Haagenrud-Sande) is more than he can manage.

Others are mapping the seismological events across Norway and shrugging off the tremors as “construction blasting” — but chief seismologist Johannes (Stig R. Amdam) is no more convincing arguing that in Norwegian (with English subtitles) than he’d be in English.

But it takes a colleagues’ death, testing the status of one of the country’s many highway tunnels, to push Kristoffer to action and put “The Quake” on the same level of pathos that “The Wave” managed.

He visits the home office of the dead geologist’s office and realizes he has no time for tact with the man’s daughter, Marit (Kathrine Thorborg Johansen).

“There are some things more important than daughters and family,” he tells her, when she sadly mentions what a workaholic and absentee Dad her father was.. Catching himself, he adds “He was trying to SAVE you, and many others!”

Every groan in a building, every cell phone alert, every odd action by a rat — or rats — makes Kristoffer twitch and flinch.

“Haven’t you ever had the sense that something is about to happen?”

Poor Marit has barely absorbed Kristoffer’s alarm at seeing her father’s mountain of research and core samples when she’s ferrying him about, barely an afterthought to him as he dashes off to warn his son, wife and daughter.

“It must be nice to just lie back with your feet in the air and have a little breakdown,” Ondun cracks at Kristoffer’s state. But when he says “I don’t mean to scare you” just as the lights flicker out, she’s inclined to take him seriously.

“The Quake” then proceeds much as “The Wave” did, with Kristoffer frantically calling family and colleagues in an ever more manic sprint through Oslo and environs, sounding the alarm.

Literally. He can’t risk coming off as the nut he seems to be, so he just hits the fire alarm to empty a building. He can’t get his son to respond to texts in the vast college lecture hall, so he calls in a bomb threat to the U.

Characters are trapped in high rises, in the city’s glass-encased opera house. Glass decor is everywhere, not the cleverest touch in a city that was leveled by an earthquake in 1904 and is overdue for “The Big One.”

Director John Andreas Andersen masterfully builds suspense — a blackout here (eerie), rising water bubbling up through street drains, and those damned rats, who know what’s coming just as sure as Kristoffer and we do.

Sweeping aerial shots capture the topography of this corner of Scandinavia, and marvelously set up parallel events show us the principal characters are they face the mortal terror of the Earth literally trying to swallow you.

Kristoffer’s son Sondre (Jonas Hoff Oftebro) struggles to calmly urge his college girlfriend to join him in leaving the lecture and is so Norwegian-polite he can barely bring himself to interrupt his increasingly irate professor. Kristoffer abandoned decorum thirty minutes ago, and Indun turns into a Tiger Mom when she recognizes that her nutty ex is right and their little girl is in danger.

Because the little girl has a mind of her own and makes the bad decisions of somebody panicked by a repeat of the events only her Dad could save her from a year ago.

Joner is quite good as a man who has teetered on the edge for a year, haunted by the memories of the 248 people he could not save from “The Wave.” The wild hair helps.

Torp has a couple of great scenes and gives “The Quake” its high stakes and its urgency in the way she plays them.

The deaths, even random ones, are grim and gripping.

And the effects? Damned if this isn’t what an earthquake would look like. 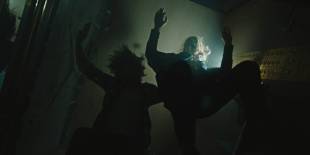 “The Quake” has a taste of zeitgeist about it, with much of the world turning its back on science and a select few willfully rejecting fact-based data warning of this coming calamity or that one.

However “The Quake” plays in Norway, there’s a funny irony in making a story about a heroic geologist and shipping it to America, where we have an Interior Secretary claiming to be a heroic geologist himself, when he is neither, probably the least among his many sins.

If you’ve seen “The Wave,” you know the story arc and can guess the action beats, built on a long tradition of disaster movie tropes. That “The Quake” can still grab, alarm and thrill is a testament to skilled storytelling, empathetic performances and effects that rewrite the book on how disasters play out on the big screen.