Posted on August 9, 2018 by rogerinorlando 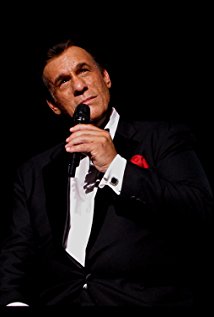 You may not know the name, but you know the face of Robert Davi, a veteran heavy, a big screen fixture for decades playing mob bosses, made men, Bond villains and the occasional cop, soldier or Fed.

“I’ve had to live with this face,” he shrugs. “I look like, you know, a thug.” And he’s more or less accepted that.

But one of those villains — Jake in “The Goonies” — gives away Davi’s true passion, singing a little opera in between threats and violence. That was the Astoria, Queens native’s first love.

And as the decades of making bad guy money have progressed, he’s been able to buy a nice house, raise a family and finally indulge in that original passion, touring with an orchestra, performing the music of his idol, Frank Sinatra.

“Davi’s Way” is a documentary about Davi’s grandiose plans to celebrate Sinatra’s 100th birthday, to replicate a signature concert in Sinatra’s career, the 1974 “Main Event” at New York’s Madison Square Garden. The Chairman of the Board made history with this defining late-career solo show, singing from a boxing ring, “punching” his way back to prominence, one more time.

And if, like most people, you don’t know the name “Robert Davi,” you can see where this might be a problem. “Davi’s Way” director Tom Donahue (the vet-healthcare expose “Thank You For Your Service” was his) captures the humble character actor’s descent into delusional diva-hood in this warts-and-all, laugh-until-you-cringe documentary.

Davi has this dream, and he approaches a friend “Danny A.” with some concert promotion connections. He hires an aspiring actor “Stevie” as his overwhelmed personal assistant. And away we go — a year of tantrums, shrinking expectations, endless promotion, petty indignities and “tough love” to the daughter, Ariana, who wants to be a singer/actress and wants Dad’s help getting a start in the business.

Davi has the chops and stage presence to manage a more than passable late-career Sinatra, and no less than Quincy Jones sings his praises in the film.

But man, what a tool. At times it’s as if he’s playing a tool, a self-important star who bullies and insults that assistant, the film crew — “I don’t want bad-guy lighting. FILTERS!” — makes his daughter cry and annoys the hell out of promoters, would-be show producers and venue operators.

He doesn’t like being told that doing Sinatra is “not just about putting on a hat.” And he REALLY doesn’t like it if he’s wearing a hat and sunglasses and anybody else in the room is wearing the same. Especially that hapless assistant.

He tosses names around as possible Sinatra-fan “co-stars” on his night. “Busta Rhymes? Know any females? LOR-day?”

The assistant, working his few showbiz connections, chuckles at having to ask if “Jay Z” or Timberlake are available.

Davi wants Madison Square Garden, but just to reserve a date would cost $50,000. “Nassau Coliseum,” he counters. “How about these twin skating rinks?” the Nassau Coliseum guy offers back.

And on it goes, a year of shrinking horizons and impossible demands. He recreates Sinatra album cover photos (getting out of a chopper), hears from the most famous casting director in Hollywood history (Lynn Stalmaster) where he went wrong in his career, and then gets on with it. 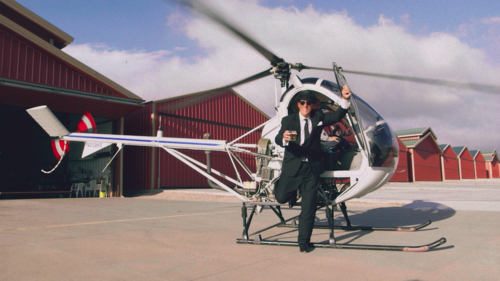 Davi, an Actor’s Studio-trained heavy, tenderly relates the story of how he got a part in a late Sinatra thriller, “Contract on Cherry Street,” his “big break,” and how he got to hang out with his fellow Italian American, known for his generosity as well as his mile-wide mean streak.

Which kind of makes you wonder how much of this meanness is just for the cameras, an act. I mean, he’s nice to Joe Mantegna, Chazz Palmineri, Robin Leach and others he needs favors from. Then we see him in concert and catch improvised stage patter that crosses the line into cruel and we figure “Oh, he learned the bad stuff from Ol’Blue Eyes, too.”

But still we laugh, at the hat thing, at the passable crooner-impersonator who thinks he’s on a par with the real deal and at the endless refusals to compromise even as he’s compromising, right up to a concert that doesn’t go perfectly but closes in on “debacle” thanks to his on-stage blunders and reactions to imperfection.

You’ve got to give a tip of the — you guessed it — “hat” to Donahue for showing the guy pretty much as he is, a big screen tough guy with a hilariously fragile ego, in the end a classic “Hollywood type,” starring Robert Davi as himself.

Credits:Directed by Tom Donahue. A 2B release.