Movie Review: A reunion, a bus ride and a mission as “Night Comes On” 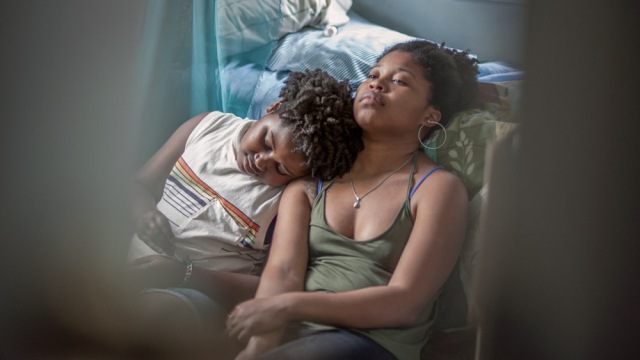 A teenage girl and her tween sister ride the bus, cross-state, towards the beach.

One’s an outgoing city kid, living in a foster home, looking forward a rare trip to the ocean. It’s her older sister’s bithday, and she’ll also take her older  to the place their Dad moved to.

The other just got out of juvie.  She’s met with her probation officer, tried to come up with some “goals” to tell him, and tracked down a lowlife gun dealer.

The pistol’s in her purse, because Angel (Dominique Fishback) bought a round trip ticket for her sister, a one-way ticket for herself. She’s going to shoot the father she saw beat her mother to death “right in front of me.”

That’s the simpler-than-simple set up for “Night Comes On,”  a very fine debut feature from actress (“Ozark,” “The  Good Wife,” “The Mob Doctor”) turned director Jordana Spiro. It’s a lean, understated character study whose grit comes from its attention to detail.

Spiro follows Angel, played with poker-faced resignation by Fishback (“The Deuce” and the upcoming “The Hate U Give”), as she gets out of jail, collects her things and tries to take care of just one thing at a time.

Get my phone. Find a charger for my phone because the state lost my charger. Call Maya, the girlfriend I’m going to stay with. Call her again. And again.

Meet with Mark (Max Casella). Try to negotiate for a gun. He’s got some sort of sexual barter in mind.

Meet with my parole officer. That’s the first stand-out scene in this intimate step-by-step “starting over” (only not really) scenario. Angel cannot shake her prison toughness, her insolence, in just a day. The probation officer (James McDaniel)  isn’t having it.

“The world isn’t going to open up for you.”

It’s all Angel can do to maintain her sleepy-eyed resignation. She can’t make herself show “hope” for her future. Not to this man.

She can’t hide wholly hide her disappointment that Maya (Cymbal Byrd) has moved on to someone else. But she must have expected it. Sleeping in a stairwell? No prob. Just get me a public bathroom to wash up in.

It’s only when she checks in on bubbly sister Abby, warehoused in a big foster home with several other foster kids, that Angel softens. The kid has time to play. She’s smart. Yes, she’s on Ritalin and other meds, but she seems to be thriving.

Angel? She’s tried the authorities, prodded her probation officer and nobody will tell her where her father, released awaiting trial, lives.  Maybe Abby knows.

Spiro and Fishback unlock Angel’s long-dormant compassion with a screenplay that plays up her slow realization that whatever she does today, that little sister needs mothering. Abby has personality that Angel never acquired.

We’ve seen the older sister’s subdued dismay at what other kids her age are up to, living happy lives with friends, cheerleading and such. Angel was doing drugs and shoplifting, violently lashing out, paying the price for family violence that marked her and humiliated her. Abby knows none of that, making friends on the fly. But she doesn’t know how to be wary of the world, doesn’t know what do to with her hair, doesn’t know how to handle her first period — big sister stuff.

“Congratulations! You can pop a baby out!”

Angel doesn’t have the delicate touch.

Young Ms. Hall may be “a natural,” but her performance smacks of “child actor.” It isn’t just foster homes that have given Abby this polish. A couple of others in the cast also have a hint of “undiscovered regional theater actor” to their speech, their carriage and demeanor.

But Spiro has still gotten a striking, gritty and touching debut feature out of this cast, a movie that may lack much in the way of surprises but makes up for it with toughness, empathy and realism.