Netflixable? “Like Father” has Kristen Bell ponder her connection to Kelsey Grammer

Posted on August 3, 2018 by rogerinorlando 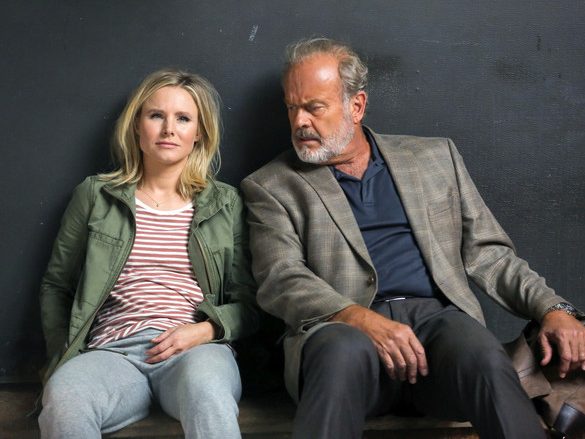 Basically a Royal Caribbean ad masquerading as a romantic comedy, “Like Father” pairs up Kristen Bell and Kelsey Grammer as daughter and estranged father paired on what was supposed to be “her” honeymoon cruise to Jamaica.

But that’s about as funny as this bland and not-quite-sad little floater manages for its 100 or so minutes.

Seth Rogen’s wife Lauren wrote and directed it, so it has Bell dropping the F-bomb like a drunk prom queen — vulgarity, the glue that makes the Rogen marriage stick.

But it’s as a drunk jilted bride that we meet Rachel, a busy marketing/branding whiz who barely manages to put her phone down before walking down the aisle for her Dream Wedding in Central Park.

Dropping that phone at the altar? That’s a deal breaker, in “Like Father” logic. Owen (Jon Foster), who must’ve been thinking about this a while as he didn’t even bother to shave before this swank, tuxedo’d ceremony, leaves Rachel at that altar.

After seemingly shrugging it off, nailing a pitch to clients at the office, she takes a moment to clear her desk and melt down, just a little.

Then her evening drinking binge is interrupted by Dear old Workaholic Dad, whom she hasn’t seen in 25 years.

His “You could use a drink” becomes an all-nighter, black-out-on-the-sidewalk affair, punctuated by him spiriting her to the town car and then cruise ship honeymoon suite she’d already paid for. Seemed like a great idea while they were plastered.

So these two, boozing and bickering and meeting all the “assigned” table mates on this binge boat, are here to avoid the endless intrusive “You crazy love-birds” questions followed by efforts to “help her” get over her embarrassment.

Seth Rogen shows up as a newly divorced, “rebound” Canadian who shows up 35 minutes in, a bit too late and entirely too little, as it turns out.

“Excursions,” on-board game show entertainment (almost funny), discos and karaoke and “family therapy” from the gay couple that share a table together build towards  abrupt changes in mood and tone predicated by plot necessity.

“You hate me and you probably should,” was Harry’s re-introduction to Rachel. So maybe a little daddy guilt over what he did wrong, maybe a little Rachel running around for a rebound, tantrums tossed, “Dad jokes,” none of it funny.

A Jamaican hike with a little ganja proffered is supposed to be cute (Guess who turns it down?).

We’re grasping at clues as the movie takes a stab at sentiment, Harry’s constant mention of his “business” partner Gabe, his utter comfort crawling into a bottle, even when it’s in a brown paper bag. There’s something we don’t know. Make us care, for Pete’s sake.

I had a notion that Netflix would be a great fit for Bell, whose big screen career has been miss and flop and “Frozen” and “Bad Moms.”

“Like Father” doesn’t quite rule that out, but she and Grammer and especially Rogen (who knows to keep his yap shut at home, I dare say) know this isn’t much.