Movie Review: Coming of age isn’t any easier when you “Lean on Pete” 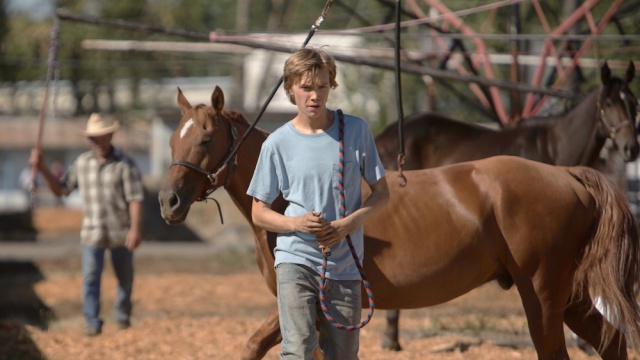 A conventional coming-of-age-while-poor narrative serves up plenty of unconventional twists in “Lean on Pete,” a dusty, downbeat tale set on the margins of horse racing.

That’s a world 15 year-old Charley (Charlie Plummer) discovers one summer day while strolling past the local track. This isn’t “the sport of kings,” with Triple Crown winners and mint juleps. Portland, Oregon might be the highest profile stop on a circuit of fairgrounds and time-worn circuits that saw their best days pre-TV, tracks where quarterhorses race.

Charley’s dad (Travis Fimmel, terrific) may be good company and a reasonably attentive single parent. But he’s not a solid provider, drifting from woman to woman and job to job, and that does nothing for the kid’s well-being or his high school grades and high school sports ambitions.

He’s played  by Steve Buscemi, and the string of expletives he unleashes as we meet him tell us, “Maybe not father figure material.” Del is an aged hustler running a handful of horses he drags from track to track, making stake money here and there, cheating when he has to.

This is what Charley learns from him, the “vitamins” slipped to horses, the illegal “buzzer” his jockey Bonnie (Chloe Sevigny) uses to goose her ride into contention. The ageing horse with the most promise in Del’s stable of losers? Lean on Pete, who takes to Charley as Charley, whose life hasn’t had room for pets, takes to him.

“You can’t get all attached to the horse,” Bonnie lectures. “They lose too much, they get sold.”

By “sold,” she means “to Mexico,” Del threatens. That’s where horses as meat is the most valuable.

This plot description has you thinking, “OK, I know where this is going,” as it did me. But writer-director Andrew Haigh, adapting Willy Vlautin’s novel, doesn’t take us there. Don’t get too attached to characters, because they leave Charley’s life as his odyssey takes a more depressing turn.

The greatest virtue of “Lean on Pete” is the world this kid inhabits, and not just the horse tracks gone to seed. This is how the working poor live, leases they can’t see through, under-furnished homes, a perpetually empty fridge and struggle. Violence is never far out of the norm.

Plummer’s performance is aptly matched to his appearance. He’s lanky, gawky and awkward, a kid who has moved too often to make lasting friendships. He’s shy to the point of standoffish. And he is absorbing lessons, about horses and life from Bonnie and Del, and about women from his Dad.

“The best women have all been waitresses, at some point.”

Buscemi, Sevigny and Steve Zahn (as a trailer-dwelling drunk) all give fair value in any film lucky enough to have them. The picture hangs on Plummer, and his blank face/blank-slate innocence haveto carry it.

“Lean on Pete” is a somber, quixotic trek through a modern West of limited horizons, finite opportunities and the sense that even the young are just playing out their string. It’s a long, unhurried drama with the odd flash of violence and tragedy.

Plummer, milieu and a fine supporting cast make it pay off, even as we keep our doubts about that right up to the finish line.