Netflixable? Jake Johnson’s a gambler looking for the elusive “happy ending” in “Win it All”

Mumblecore comedy meets the fateful, fatal romance of gambling in “Win it All,” an engaging wallow in the land of the losers starring Jake Johnson.

It’s a low-rent travelogue reminiscent of every hot-streak-goes-bust picture ever made, the ones that emphasize charm and ineptitude over violence.

It’s not “Rounders.” It’s more “Let it Ride.” With a dollop of “California Split.”

Johnson, of “Safety Not Guaranteed” and “Let’s Be Cops” and TV’s “New Girl,” is Eddie Garrett. His pick-up line isn’t the smoothest with single mom Ava (Aislinn Derbez).

Get into the rhythm of the speech, the give and flow of the dialogue. That’s what “mumblecore” was. It’s hard to even call it a genre of its own any more. It’s the somewhat improvised, insanely chatty drollery that made Greta Gerwig a star (“Hannah Takes the Stairs”) and Joe Swanberg and the Duplass Brothers filmmakers to watch.

Eddie is a Chicago hustler who is the last guy — the LAST guy — you’d think to “store” a bag full of cash and the evidence of a crime with. But that’s exactly what a bookie’s collector (José Antonio García) does when he’s headed for a stint in prison.

Eddie is faced with this dilemma, but he’s got a sponsor (Keegan-Michael Key) to help him do the right thing.

“There can’t be a happy ending.”

The right thing is the last thing Eddie is going to do.

Swanberg, who co-wrote this with Johnson, gives us the gamblers’ high, that winning streak montage. How’s Eddie doing in relation to the cash stash he’s supposed to not touch? Swanberg slaps a running tally (“+$2148”) on the screen so we can keep score.

If you know that Richard Dreyfus “classic” of the genre, “Let It Ride,” you know what’s coming the moment Eddie puts on the white linen suit and heads to the track. Everything goes South.

Key, as Gene the sponsor, plays this revelation the way any sane person would. He busts out laughing. He trots out the “rock bottom” admission mantra.

“You’ve got to admit you’re an idiot!”

“My name was Edward Garrett. And my friend Gene was right, I’m addicted to losing.” 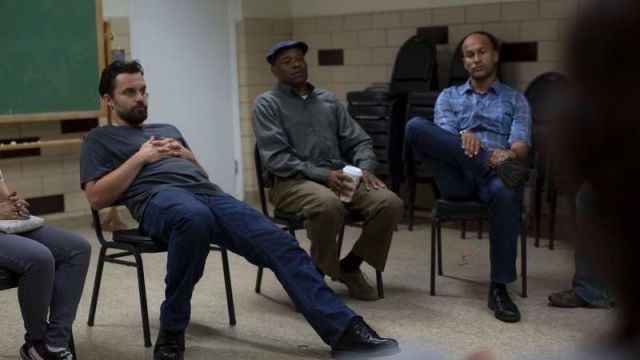 “Win it All” has a well-worn story arc, and its charms lie in the ways the “good woman and brother (Joe Lo Truglio, quite good) bring Eddie around” interrupts the reckoning we know and dread is coming.

I’ve seen so many movies of this genre — “Hard Eight” to “The Cooler,” “Mississippi Grind” to “21” — that it’s almost impossible to deliver a twist that’s a genuine surprise. “Win it All” doesn’t have much of one.

So as you and I await the inevitable, listen for the little pearls in the dialogue. Eddie’s brother Ron begs begs begs him to take a “straight” job with his yard service business. And when he does, he rides him — about keeping the mowers running.

“Julio is literally down by the school yard with a broken belt. He’s doin’ lawns that look like crop circles.”

Yes, it’s scruffy and likable enough. But track down “Mississippi Grind” or “Hard Eight” or “The Cooler,” if you haven’t seen them. All in, “Win it All” is all Jake and not enough Johnson.