Netflixable? Leto attends Yakuza Tattoo U. as “The Outsider” Of all the things one can imagine actor Jared Leto as — hearthrob, “Mr. Nobody,” emaciated transgender junkie with AIDS — “made man” in the Japanese mob would have to be low on the list.

But as delicate as he can seem, he more or less gets away with it in the new Netflix film, “The Outsider.” He plays a mysterious American gradually invited into the Yakuza by virtue of his prison time and aid in getting another mobster out of the joint, his silence and his propensity for doing the violently unexpected.

The movie is a sometimes fascinating portrait of post-war Japan, the Osaka and Kobe of 1953, when resentment over the leaving American occupiers is still strong, but the mania for imitating everything American was peaking.

Our mobsters wear matching black suits and ties, travel in Yank tanks (A Chrysler Imperial) and in between sumo matches and Noh theater performances, duck into night clubs where mambo is all the rage, and the bands are a fair approximation of anything you’d have found in Miami or Havana, back in the day.

The “gaijin” (outsider)? He doesn’t talk much. “I don’t speak Japanese” he tells the guards in prison. Outside it, he leans toward plain white tees and khaki over Army boots.

We don’t know why he was in prison. But when the tattooed mobsters who run the joint try to hang a man, he intervenes. That earns a beating from the guards, and a furious lecture. In Japanese. And a newly beaten-up roommate. ‘

Kiyoshi (Tadanobu Asano) enlists his help in an escape plan, one involving the prison hospital and attempted seppuku (hari kari). And when that pays off, the favor is repaid.

We eventually learn the American is named Nick, that he doesn’t shy away from the offer of working with this new “family.” What he doesn’t realize is that the Shiromatsu faction is on the wane. They’re losing territory, threatened by the Seizu family.

The story here, doled out over two hours, is nothing new, nothing we haven’t in scores of gangster movies (“Donnie Brascoe,” for instance). There’s a girl (Shioli Katsuna, sporting quite the American accent), an old friend (Emile Hirsch), a turncoat inside the mob, assorted confrontations rising toward a bloody finale.

What’s novel here is the milieu — the setting — the differing rituals of this version of “The Mob,” finger loppings and Shinto priest blessings at made man ceremonies.

And tattoos. Everybody’s got ink, and not a little. Most of us have gotten at least a tiny taste of Yakuza behavior and code from other movies and cop shows. They have thrived in a culture of good manners, quiet deference and staying in your lane by being loud, garish bullies prone to threaten violence, and on occasion, even deliver it, to get what they want.

They’re the Mafia with different pasta.

Leto, in slicked back hair that seems a little out of place (not everybody in the cast went for 1953 buzz cuts in the American GI or Japanese businessman style), gets the job done with a minimum of talk — a smart call. Neither he nor his character is ever going to intimidate anybody with muscle. 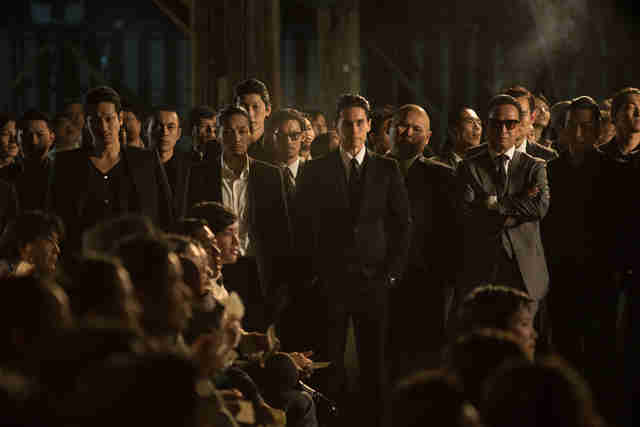 If Nick’s quick acceptance into this mob raises an eyebrow, that serves to deflect our expectations.Other logical lapses are harder to swallow.

And the violence, graphic in the extreme, won’t be to every taste.

But “The Outsider,” a package bundled up by the father-son producers Art and John Linson (“Into the Wild,” “Sons of Anarchy”) is just far enough off the well-worn mob movie path to be worth a look, even if — like too much on Netflix — you feel the need to bail and see what else is available before it bleeds out.