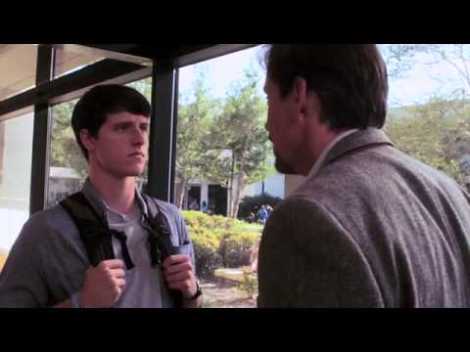 When you lose your temper, mother always taught you, “You’ve already lost the argument.”
That’s not good news for “God’s Not Dead.” This is the angriest faith-based film in memory.
Believers here are outnumbered, a persecuted, righteous and intellectually rigorous minority — i.e.  “Duck Dynasty” stars, or viewers.
Non-believers run the gamut from fascist, bullying college professors to an abusive Muslim who would rather beat his child than let her study the Christian Bible, from Godless Chinese who fear government persecution to “ambush” journalists out to “get” those God-fearing “Duck Dynasty” millionaires.
It’s a movie where rare is the voice that is raised, but deep is the rage bubbling through its rabid anti-intellectualism. When a non-believer is considered to be better off dead, that’s not brimstone you’re smelling. It’s bile.
Shane Harper plays Josh Wheaton, a freshman at Hadleigh University who ignores warnings and enrolls in Professor Radisson’s philosophy class. Radisson is a smug, sneering atheist who insists that his students sign an admission that “God is dead,” before he even starts the semester. Josh refuses to sign, and thus the professor, played by one-time Hercules Kevin Sorbo in a Lucifer goatee, decides to give the kid the entire semester (apparently) to prove the opposite.
Radisson is a caricature of a know-it-all college prof.
“In that classroom, there IS a god. And I’m him.” Fair enough.
But would this “god” allow a fundamentalist freshman to take over his class for an entire semester?
He’s fond of calling Christians “Flat Earthers,” of quoting Bertrand Russell, Richard Dawkins, Stephen Hawking and the like — atheists, all.
To which Josh fires back C.S. Lewis (naturally), John Lennnox (a British mathematician, Christian apologist and debate foil for Dawkins) and “Lee Strobel,” who is not identified as what he is — a TV preacher. No, those thrown into the fray from the “God is good, all the time” side are neither as numerous nor as credentialed.
Amy Ryan (Trisha LaFache) is a blogger for “The New Left” who wears her “Meat is Murder” and equivalent liberal bumper stickers with pride as she surprises Willie and Korbie Robertson of “Duck Dynasty” and Christian rockers Newsboys with confrontational interviews.
She’s dating callous atheist lawyer Mark (Dean Cain), whose believer sister (Cory Oliver) is dating her former professor, Radisson.
Hadeel Sittu is Ayisha, a student whose stern Muslim dad keeps her covered up and unassimilated.
And then there’s the preacher (David A.R. White) who only wants to take his African missionary friend (Benjamin Ochieng) to Orlando, but every car he gets into fails to start. Divine intervention? He’s needed for a higher purpose here in this Louisiana college town?
The pace is stumbling, the characters are broad, the makeup and the performances uneven, though Sorbo dives into his tactless, unethical indoctrinator role with Satanic glee.
The laughs are mostly of the cruel kind. One character tells another she has cancer.
“This couldn’t wait until tomorrow?”
The “Put God On Trial” stuff, a Power Point debate in the classroom, is pointless and comically imbalanced, with Josh accusing those who declare that God doesn’t exist of “circular logic” when that’s all he has to lean on himself — that, and false equivalencies. Hurling TV preacher quotes up against Hawking, Darwin et. al. is laughable.

The very title of the film is a semantics trick, to the nonbelieving cultures of the world. How can a supernatural being that never existed be dead?
It’s a movie better versed in propaganda techniques than cinematic ones. Band-wagoning, for instance, filling the closing credits with decades of legal actions by the James Dobson-backed Alliance Defending Freedom against colleges which have somehow impinged on Christian students’ rights, suggesting a sea of lawsuits and a tidal wave of “success” that isn’t really there.
And like the hit Creationist documentary “Expelled”, “God’s Not Dead” is a straw-man debate, with myopic and hopelessly biased theists laying out the other side’s arguments for it, twisting or dumbing them down to make them easier to swat down — Limbaugh style.

The movies too often paint Christians with the sort of laughably broad strokes that this Harold Cronk sermon-to-the-choir picture depicts atheists. Cronk and his movie are their own worst enemies here, pandering, outraging the faithful by telling them what they want to hear and, by giving “Duck Dynasty” a prominent role, giving away how frustrated — and angry– believers can feel that they have no better spokesmodels for their points of view than a bunch of blow-dried duck-call salesmen. Christian apologists are the ones who should be insulted here.

Update — Kevin Sorbo comes out of the closet — as a bigot.

This entry was posted in previews, profiles and movie news, Reviews. Bookmark the permalink.