Bingeworthy? Ill-conceived “Space Force” is a mission that should have been aborted 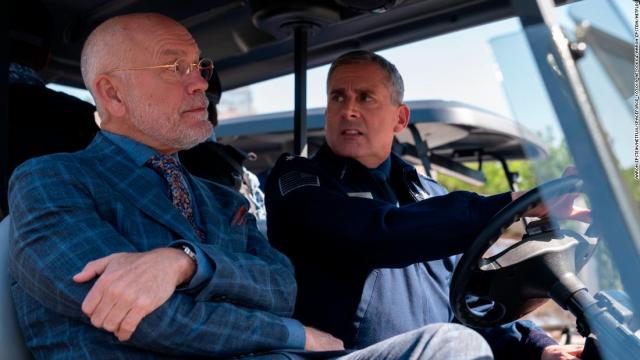 “Space Force” pops out of the Netflix logo as instantly awful, like a politically-pointed all-star “Saturday Night Live” sketch that never made it on the air — five hours worth.

It’s a riff on America’s new “Space Force” that bludgeons the point that “Nothing conceived by these idiots (the Trump administration) will ever work out” idea to death, and then pounds the corpse for nine more episodes.

Jokes? A Chinese satellite disables the newly launched Space Force “Epsilon 6.” But can it be fixed?

Dopey special requests from the Tweeter in Chief? Test assault rifles in space so that they can be “The official Space Force guns for mass shootings on the moon!”

“Or HUNTING,” a helpful aide adds.

The late Fred Willard blows lines and affects a tremor as the General’s ancient, addled father.

Instantly awful. You keep watching, waiting for this or that to click, for the wonderful John Malkovich (the science chief) to make it worth watching, for Naird’s wife’s (Lisa Kudrow) imprisonment to be explained, for this pointless thread or that one to resolve.

Allow yourself to get your hopes up that the funny names and faces in the pilot — Diedrich Bader, Jane Lynch, Patrick Warburton and Noah Emmerich are the other members of the Joint Chiefs (as is “According to Jim” veteran Larry Joe Campbell, who’s even less funny than Emmerich) — that the sight gags will get better than a digital monkey in space and the one-liners will improve at your own peril.

I mean, a “Real Housewives” riff on “Skinny Fuel” (“Skinnygirl” Bethenny Frankel would have been funnier pitching it. Not much, but…). Random jokes about how much everything costs — “Four.” “Four million?” “Middle schools. It costs four MIDDLE schools” worth of taxpayer dollars. A Russian spy out in the open (POTUS approved) who insists you call him “Bobby.”

Ben Schwartz as a “Media Manager” who composes the not-witty tweets for Gen. Naird?

Considering the talent hurled at this, we all have a right to expect better. The whole affair has the whiff of “Take Netflix’s money and RUN” about it. Daniels, in particular, should be embarrassed by the general lack of effort in the plotting, dialogue and jokes.