Movie Review: Tracee, Dakota, Kelvin and Cube aim to leave us on “The High Note” 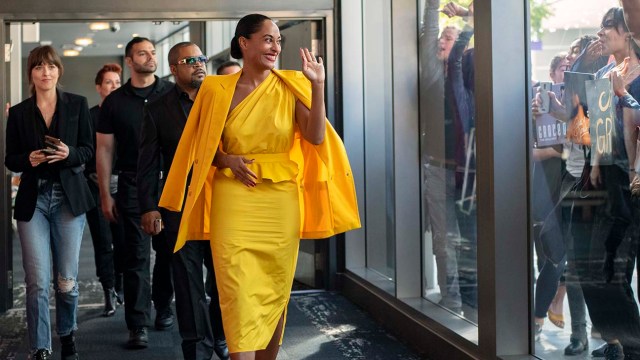 There are worse sins than leaning into the cute if you’re making a diva-and-her-assistant romantic comedy, especially if you’ve cast sitcom star Tracee Ellis Ross (“black-ish”) as the diva, and Dakota Johnson as the assistant.

Ross, the daughter of that diva’s diva, Miss Diana Ross, gives her 45-and-counting singer, Grace Davis, a sitcom rhythm to her punchlines and plays “nice” when the caricature of the “type” is arrogant, needy and cruel.

And Johnson, daughter of divas Don Johnson and Melanie Griffith, is always helped when she’s surrounded by funnier people than herself.

That makes for an agreeable dramedy about music, showbiz dreams and family legacy, a movie that amuses and occasionally even surprises, sometimes when it hits “The High Note.”

The relationship set up here seems more a product of chemistry and the dynamics established on the set than the requirements of the first-produced-script of its screenwriter.

Johnson, as Margaret “Maggie” Sherwood, is a bit old to be an assistant. But she’s been with Grace three years because, more than anything else, she’s a fan. And being 30ish, she’s inclined to speak her mind.

Grace is being talked into taking a Vegas residency at Caesar’s Palace. Maggie is appalled and thinks it’s time for that first new record in ten years because “the fans want one.”

And then Ice Cube, as Grace’s grumpy lifelong manager Jack, comes in and steals the damn movie from these two glamour pusses.

Jack is all about “Play it safe, STACK that money.” And “new material?” Don’t get him started.

Grace is almost a passive presence in her own career, rarely getting her back up about her “11 Grammys,” her due respect, HER ideas.

Maggie? She wants to be a producer. She’s secretly befriended an engineer who helped her remix cuts for Grace’s concert album. And then she meets this apparently well-off aspiring singer-guitarist-songwriter (Kelvin Harrison, Jr. of “Waves” and TV’s “Godfather of Harlem”).

He may think he’s just “some douche-bag who thought he could be a singer.” To Maggie, “You’re just self-sabotaging. And I can work with that.” 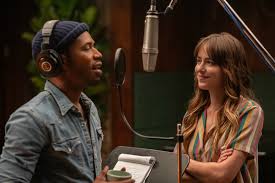 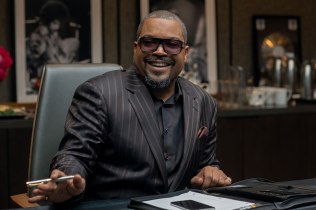 It’s a perfectly pleasant movie to sit through, although there’s more sitting than the material warrants, and “pleasant” shouldn’t be the highest note you’re reaching for — not with this many “names” in the cast (Eddie Izzard and Bill Pullman show up later).

Director Nisha Ganatra got her second chance at feature film glory with last year’s “Late Night,” and still has trouble getting out of her own way. Her first crack was a Heather Graham bomb, “Cake.” “High Note” should sing and just zip by, and she’s made 113 minutes that show off Ross’s voice (thinner than her mother’s, not bad), frequent rides in Grace’s McLaren 570s, an abortive “No Scrubs” sing along, a movie that bogs down in Maggie’s machinations and romantic pitfalls and delays, as long as it can, some pretty corny third act surprises.

Like “Late Night,” this plays as soft, no edge. Even the arguments are squishy. Until Ice Cube’s Jack pipes up.

“Who the Hell you think you are, Missy Elliott? GO to Starbucks!”

That’s how a diva talks to an assistant, dears. Make a note of it.

MPAA Rating: PG-13 for some strong language, and suggestive references