What we remember is the smile.

The Emmy winning characters, the crazy hair, the skill at creating funny faces, funny voices? Gilda Radner‘s name summons up those memories, too. And then we smile.

But her smile comes first,  her broad, toothy, omnipresent gift, perfectly summed up by her Second City/Toronto director Andrew Alexander in the new documentary, “Love, Gilda.” That smile was her secret weapon. Gilda, he says, could “always find a way to endear herself to the audience.”

Lisa Dapolito’s film has endless shots and clips of Radner smiling in her too-short 43 years of life. She beams as a slightly chubby child mugging for the Polaroid or home movies of her growing up in Detroit, grins on campus at the University of Michigan, backstage at Second City and National Lampoon’s “Lemmings,” guffaws in after parties for the famous Toronto production of “Godspell,” where she first met musician/comic/collaborator Paul Shaffer and dated Martin Short, and on cracks up rehearsing “Saturday Night Live.”

But the film digs deep into the packrat Radner’s archives, narrating her life on tape for her posthumous autobiography, “It’s Always Something,” sampling her diaries, journals, full of random poems and self-reflective thoughts, many of them read on camera by the generation of comics inspired by her — Amy Poehler, Melissa McCarthy, Cecily Strong and Bill Hader.

Hader gently opens her journal and his voice cracks, “This is a real honor. No. Seriously. This is a BIG deal.”

Dapolito gets at what Radner represented to those who followed her, and what Radner recognized in herself, that play-acting comedy let her “be prettier than I was, be people I could never be…Comedy allowed me to be in control of my situation.” 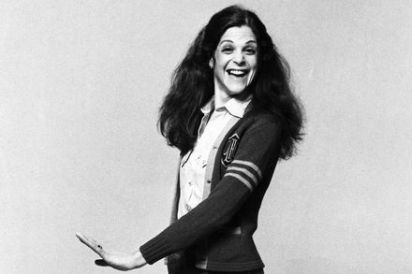 This documentary soars through laugh-out-loud-to-this-day characters and sketches, and dips into the darkness of eating disorders, traceable to a rich, over-concerned mother who put Gilda on diet pills at 10. It tracks Gilda through her “Saturday Night Live” glory years, peaking with a late 70s one-woman show on Broadway, and then records her decline.

A radio interview taped in the ’70s captures her confusion and inability to think of what “the next big thing” for her might be, even as the weight of “SNL” fell on her shoulders with the departures of so many castmates. Her ambition was to live, find love and be happy.

You have to laugh at the notion that this scrawny, gawky woman/child with the face-eating grin dated scores of people she worked with — almost every guy who later appeared in “Ghostbusters,” for instance — and  married first a Canadian sculptor who didn’t like it when she was funny, then G.E. Smith, guitarist for her one-woman-show “Live from New York” (and who became “SNL” music director/guitarist) and finally Gene Wilder.

The little news value that the film has isn’t that it puts to rest any rumors about the nature of that Wilder/Radner relationship, because we can see the loving, nurturing and caring for her after her cancer diagnosis, which we knew about. We also hear that  Wilder “got her to eat,” finally, his nephew insists — and her diary lets on how she really learned how to live with Wilder, even if she “made my career” out of getting him to marry her — taking tennis lessons, learning French, etc.

We can still see the movies they made together — “Hanky Panky,” “Woman in Red,” Haunted Honeymoon” — and how ill-used and overshadowed she was in them. That’s kind of on Gene, too.

But there’s a reason ancient reruns of “Saturday Night Live” still have laughs and still have value. Lorne Michaels made Radner the first official cast member for a reason, and seeing Emily Litella and Roseanne Roseannadanna again, we can see why. She was an original, and thanks to that smile — immensely relatable. Who else could have gotten “Bitch” past NBC censors, a network first? As little old Emily Litella, Gilda did.

Dapolito gets friends and former castmates to talk about Gilda dating Bill Murray while they were shooting the “Todd and Lisa” sketches which gave those turns an electric, nerdy, hormonal anarchy. ”

That’s one of the great joys of “Love, Gilda,” that Dapolito’s star and Amy Poehler’s inspiration, dead almost 30 years, can still deliver a laugh that takes your breath away. And in our memories, at least, she always come out smiling on the other side.