The triumph of “Crazy Rich Asians” is the spectrum of its characters, a broad representation of the global Chinese diaspora.

Granted, these are the Asian “one percent” we’re talking about here, but you have old money nobility, sage elders, gauche goofballs and party animal vulgarians. Pettiness and kindness, enduring marriages and infidelity, class snobbery and academic achievement are represented.

There are cliches and stereotypes, but the film’s broad collection of “types” transcends that.

That’s why you see the words “representation” and “inclusion” in most reviews of this Jon M. Chu (“Jem and the Holograms”) film of Kevin Kwan’s novel, the first of a trilogy.

The movie? Well, you’ve seen the trailer, right? It is exactly as sold, as aspirational and acquisitive as “Keeping Up with the Kardashians,” as surprising as a McDonald’s menu.

Their clothes are the latest fashions from Milan, Paris and (for the tacky) Vegas, their music consists of Chinese covers of jazz and pop standards and Madonna classics. “Material Girl?” You guessed it.

And the story they’re stuck in? A weary “she’s not good enough for my crazy-rich son” tale of class consciousness, with an all-Chinese cast of characters. It has hints of the high-tone gloss of Tyler Perry’s melodramas among Atlanta’s African American elite and the outsider-looking-in cultural divide of “My Big Fat Greek Wedding” (OK, “Greek Wedding 2,” as in less funny).

Constance Wu stars as Rachel Chu, an economics professor at NYU. She’s dating this hunk, Nick Young (Henry Golding) and he’s invited her to his cousin’s wedding back in Singapore. He’s to be the best man, he tells her.

What he hasn’t told her is that they’re flying first class in one of those trans-Pacific luxury airliners, that his family’s “comfortable,” “which is exactly what somebody super-rich would say!”

OK, so a professor at an elite American university in New York has dated a guy for a year and never “googled” a notoriously “eligible” heir to Singapore’s richest developers. Riiiight.

The world Nick inhabits is insular enough that he’s been noticed, dining out with Rachel, by the diaspora’s speed-of-light social gossip network. Nick’s mother (an imperious, regal Michelle Yeoh) knows he’s bringing this “nobody” home to meet her before Nick can break the news.

Rachel? She has no idea what she’s in for.

“His parents can’t NOT like me, right?” she asks her widowed mom.

The fangs are out and the judgmental gossips span the generations as Singapore’s Chinese rich prep to take on this “golddigger.”

At least Rachel can catch up with her college pal, Peik Lin, played by the always-more-amusing-than-she-was-in-“Ocean’s 8” B-girl, Awkwafina. Meeting her and her new money/tacky “Donald Trump’s bathroom” decor-obsessed family is when “Asians” finally finds some laughs.

Because Peik Lin (Is “Pigpen” her Americanized nickname?) is sassy, slangy, all “banana” jokes — “Yellow on the outside, WHITE on the inside.”

And comic Ken Jeong plays her dad, over-the-top, pretending to only speak Pidgin English, force-feeding his plump family (and their guest) at dinner.

“Eat up! There’s a lot of children starving in America!”

They’re the life of this somewhat leisurely stroll through Asian affluence. They explain this world to Rachel, the rigid hierarchy, the supercars, the absurdly pricey fashions, with Peik Lin putting Rachel through the obligatory “makeover” scenes (“Pretty Woman”), the Young family’s “rainbow-striped” cousin (Nico Santos, a campy stitch) advising her about handling Nick’s Dragon Lady/Tiger Mom and virtually nobody coming right out and saying “She’s not good enough for him,” but a whole series of cliques coming to that very conclusion. 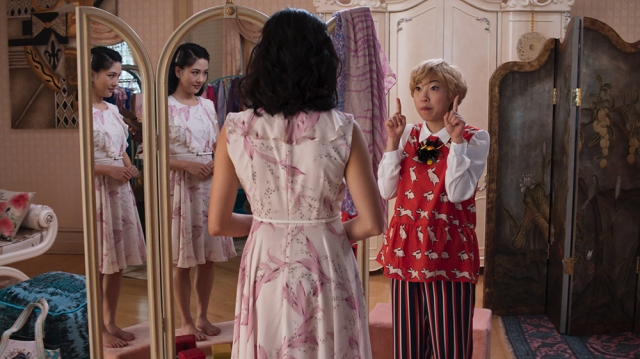 A secondary story, about Nick’s married-below-her-station fashion icon sister (Gemma Chan) has her spending millions on earrings and hiding them from her ex-military “entrepreneur” husband, who is bothered by the money. In the “Crazy Rich” value system projected here, he of course is in the wrong.

The only “crazy” stuff here consists of bachelorrette party shopping sprees — “Nobody likes free stuff more than rich people” — and a bachelor blast that is as excessive as the “Gangnam Style” groomsman (Jimmy O. Yang, funny) who throws it.

But there’s more product placement than laughs. Kwan’s novel presents a too-conventional-to-be-interesting story, one with very limited comic horizons. Netflix Ang Lee’s “The Wedding Banquet,” about a dutiful Chinese son who hides his homosexuality behind a fake “wife” he brings home to Taiwan. I’m not saying that’s the way this should have played out, but “Crazy” could use some edge, some real culture-shaking/culture clash conflict.

The world depicted, and the entire enterprise, despite some warm moments in the third act, is smug and self-satisfied in an off-putting way.

It begins with a get-even moment Nick’s mom had years ago at an exclusive London hotel, which in a racist harrumph refuses to honor her reservation. In 1995? Racism is real and the Brits invented most of the world’s racial slurs, but that grates and feels a decade or two off.

And the “only our kind” snobbery of the rich for the less accomplished Chinese doesn’t completely gloss over the monoculture we’re seeing, a reminder that sociologists place the Chinese (and Japanese) as among the world’s most racially exclusive (“racist”) cultures.

The leads are pleasantly bland, but Yeoh never lets Eleanor, Nick’s mom, descend into cartoon villainy. And the giggles provided by the supporting players help.

But “Crazy Rich Asians” puts its emphasis on “Crazy Rich,” and “Asians,” when a little more “Crazy” would get us through its glitzy two hours with less tedium and more wit.

MPAA Rating: PG-13 for some suggestive content and language