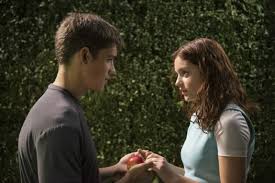 The film version of “The Giver” is briskly directed in bright, confident strokes, scripted to emphasize its thought-provoking qualities and acted by players, young and old, who are “all in” on the future they’re portraying.
As adaptations of Young Adult sci-fi go, it holds its own against the many successes of this Teens Save the Future genre.
But coming after “Divergent,” “The Hunger Games,” “Ender’s Game” and “The Host,” it underlines the paucity of original ideas in this genre. Seriously, if Hollywood serves up one more spotless jump-suited crypto-fascist future where only a “Chosen One” can make us remember the humanity we have lost, I’m screaming “Logan’s RUN” and fleeing the theater.
Lois Lowry’s novel is about Jonas, played by Aussie actor Brenton Thwaites (“Maleficent”), a teen who, with his “best friends forever” (Odeya Rush, Cameron Monaghan) is about to graduate from childhood. They’re to be told what they’ll spend their lives doing, what they’re suitable for — everything from “Drone Pilot” to “Nurturer” (childcare specialist).
The Chief Elder (Meryl Streep) thanks each “for your childhood” in a big ceremony, and since they’re all medicated at the start of every day, nobody questions this. Everyone sees the world monochromatically — literally. “Sameness” rules their rules.
“I don’t want to be different. Who would?”
But Jonas is different. He’s got the mark on his wrist, and he’s to be a “Receiver.” In a world without strife, struggle, rudeness or even bad grammar — “PRECISE language!” — Jonas will be given that gift that few share — memory. He has to be strong enough to handle this collective history of the World before The Ruin.
It was a time, the sage “Giver” (Jeff Bridges) intones, “when things were different. When there was more.” More, we learn, can mean everything from races and religions to emotions and sensations (love, pain, music, dance) and even real estate. These perfect planned “communities” on the top of this cloud-shrouded plateau are the only world any of these people know. The Giver is the keeper of memories he passes on because his class is responsible for advising the elders on matters that keep this politically correct/strife-free Utopia Utopian.
Jonas absorbs the history and starts seeing the world in color, as it truly is. He gains a whole new appreciation for his “friend” Fiona (Rush). And he starts to develop morality, independent thinking and rebellious thoughts.
Streep plays the villain of this world, intent on preserving the order of things, the “Sameness.” She reminds us that the best villains don’t see themselves that way. Her Chief Elder is assisted by, among others, her Chief of Security, Jonas’s mother (Katie Holmes). No, she didn’t give birth to him. She and Father (Alexander Skarsgard) just raised him. Maybe that’s why she has no trouble ratting out her kid’s increasingly human tendencies. Doctor Dad, however, has flashes of humanity.
I love the literalness of it all, the Orwellian euphemisms Lowry cooked up for death (“elsewhere”) and the once-playful plush toys that quiet noisy babies (“comfort object”).
Bridges gives his voice age by making The Giver jowly-growly. But he’s never a cute old coot. He is a haunted man with an official mission, and a secret one — to make Jonas see beyond this world and what it lacks.
Philip Noyce (“Salt”, “Patriot Games”) reminds us of what hiring an accomplished director brings to one of these cookie-cutter movies, creating vivid flashbacks of memory — sledding from when there was snow, sailing from when they knew the ocean, the horrors of combat when the world was at war.
But all that said, this 96 minute long, self-contained drama is flatly undramatic. Lowry’s dystopia — she did four books set in this future — is richly allegorical (she won the Newbery Medal for this) but derivative, much imitated but imitative.
Everything from the costumes to the circumscribed PC speech (“I apologize.” “I accept your apology.”) feels over-familiar, and the quest summons up sci-fi deja vu.
So while “The Giver” scores points for being smarter and deeper than “The Hunger Games” or its inferior photo-copy (“Divergent”), coming after all those other versions of this plot does neither it, nor us, any favors. “The Giver” has nothing new to offer.

7 Responses to Movie Review: “The Giver”