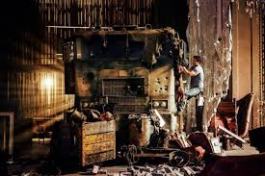 The special effects are sharper, less blurred, and the robots far more defined in “Transformers: The Age of Extinction.” Four films into this series and the giant thinking, wise-cracking, lecturing alien robots have a look that finally suggests weight and metallic wear and tear.
Stanley Tucci and T.J. Miller come in as human comical relief, and John Goodman and Ken Watanabe provide new voices, sometimes used for comedy, as new Autobots.
And if “Age of Extinction” makes you feel dumber just for having watched it, well that’s the price of popcorn these days. If it keeps Michael Bay out of trouble for years at a time (this is the start of a new trilogy), we’ll just grit our teeth and bare it.
Five years since “The Battle of Chicago,” and the Decepticons have been wiped out, their metal salvaged by a rich industrialist (Tucci). But an alien robot bounty hunter named Lock Down has come in and teamed with a rogue C.I.A. megalomaniac (Kelsey Grammer) to try and wipe out or capture the last of the Autobots. All aliens must go.
Meanwhile, in rural Texas, inventor/scrap collector Cade Yeager (Mark Wahlberg) is trying to save the farm and his hotsie-totsie daughter’s virtue by salvaging a crashed semi he found stuck in an abandoned cinema. When he and his partner Lucas (T.J. Miller of “She’s Out of My League”) resurrect the old truck and it burbles to life as an outraged Optimus Prime (voiced by Peter Cullen, the luckiest man in show business), their world gets complicated. And deadly.
Middle age has not dulled Michael Bay’s passion for photographing nubile starlets from the midriff down. Thus, does Nicola Peltz’s bottom take on the Megan Fox role of hottie-du-jour. Her character, Tessa, spends the movie in heavy make-up and Texas style Daisy Duke cut-off shorts so short her dad (Wahlberg) urges her to wash them in “cold water, and AIR dry.” Because they’re “shrinking by the minute.”
Jack Reynor plays the beau the high school senior is not supposed to be dating. Luckily for everybody, this Irish-accented lad is a rally driver, and in the film’s best chase, saves father and daughter’s bacon hurtling through the cornfields of Texas. That doesn’t mean Dad’s not calling him “Lucky Charms” as an insult.
The humans and their gathered robot teammates crash from Texas to Chicago, Beijing to Hong Kong, transforming from Camaro Pagani/Bugatti etc. into Autobots as they battle Lock Down’s metallic minions and trash assorted those cities as they do.
The wise cracks are pretty worn out, by now. But Goodman, as a portly Autobot sergeant chomping an electronic cigar (the one product placement the movie missed), spits out a few in between gunfights.
Which are plentiful in this “Transformers,” a movie with a staggering, mostly unseen body count. The language is rougher, but it’s the mayhem — much of it on the crowded streets, apartment high rises, ferries and trains of Hong Kong — that boggles the mind. Thousands must be dying as all this real estate and transit is squashed. We almost never see people, even in the Winnebago crushed on an Interstate brawl.
They’re running out of lectures for Optimus to give us about our treacherous, violent nature, running out of ways to transform (digital disintegration in some scenes, here), running out of Transformers to be turned into toys (Metal dinosaurs? Space ships?).
Yet “Age of Extinction” runs on and on, popcorn piffle without end. Two hours and 45 minutes is a pretty steep price to pay for keeping Michael Bay at bay.