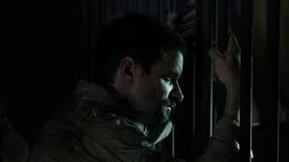 Revered sci-fi writer Philip K. Dick’s posthumously-published “Radio Free
Albemuth” earns a somewhat straightforward and updated screen adaptation from
committed Dick fan John Alan Simon.
And therein lies the problem.
Simon gives us a film that, unlike other Dick adaptations (“Blade Runner”,
“Total Recall”, “Minority Report” and “A Scanner Darkly”), is more invested in
themes, prophecy and ideas than effects. But the result is a dramatically flat
movie that drones on and on, endless stretches of exposition, from beginning to
end, interrupted only occasionally by menace, violence and very cheesy special
effects.
Jonathan Scarfe, a Canadian actor best known for playing Mormon prophet
Joseph Smith in the “Work and the Glory” films some years back, plays another
sort of prophet here. It’s 1985, America is living under a perpetual “terrorist”
threat drummed up by its Reaganesque president (Scott Wilson). And Nick Brady
gives up the record store (where those newfangled “CDs” are pooh-pooh’d) in
Berkely to move to Los Angeles and become a record producer. Because of a dream.
He had a vision, and on waking up, saw a ghostly hologram of himself. He’s sure
his wife (Katheryn Winnick) saw it too.
The only guy who can offer explanations for this is his sci-fi writer pal,
Phil (Shea Whigham). Maybe he’s seen “an alternate universe.” Maybe it’s “the
future” Nick come back to lead him. Perhaps it’s “something evil, like the
voices that told Mark Chapman to shoot Mick Jagger.”
Yes, this is that sort of sci-fi. Maybe Jagger died and John Lennon
lives.
Just because I write science fiction doesn’t mean I believe in this stuff,”
Phil (Dick) cracks.
Nick has more dreams and wrestles with their meaning, is inspired to hire an
office assistant (Alanis Morissette), to record a song that might be secretly
subversive enough to start a revolt against the fascist police state America has
become under a president 15 years in office with no end in sight.
Think of “Albemuth” as a left-wing version of the right wing “Atlas Shrugged”
movies — more fascinated with its sermon than with entertainment value or
production values. “Albemuth” sat on the shelf for years. It was filmed in 2007,
back when people remembered who Alannis Morisette was, back before Shea Whigham
became a “Boardwalk Empire” star.
Simon re-creates an ’80s tech world run by a uniformed “Friends of the
American People” (FAP) which is obsessed with drugs, God and racial purity.
Civil liberties are a myth.
Nick’s visions, from someone who might be God, or might be a sci-fi
explanation for God (aliens), are trouble.
Whigham has the right degree of cynicism to play a version of Dick, the
author, but seems entirely too sane and not nearly strung out enough to make him
interesting. Scarfe has no screen charisma.
Which means that the arrival of Morissette, the singer-songwriter who owned
American Top 40 radio in the ’90s, has to be the emotional, intellectual and
spiritual highlight of the film. Even a great actor would have had trouble
pulling that off.
So “Albemuth” just stumbles on and on, introducing new theories and facts and
then explaining, explaining explaining them, right up to the closing credits. It
may feel like unadulterated Dick, but you kind of understand why Hollywood feels
the need to tart up his fiction after seeing this tepid thriller.