Posted on March 4, 2014 by rogerinorlando 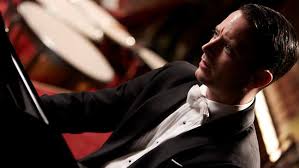 “Grand Piano” is a nail-biting thriller in the classic Hitchcock style. And the best word to describe it is one that went out of fashion long before Hitch’s death, over 30 years ago.
This tale of a concert pianist performing under a sniper’s threat — “Call for help and I’ll shoot you right between the eyes!” — is a real corker.
You’ve got the famous, nervous wreck of a pianist (Elijah Wood) pounding away at a work everybody calls “the unplayable piece.” You’ve got John Cusack’s voice in his ear, whispering threats to him about his actress wife (Kerry Bishe). And the pianist is stage whispering pleas, complaints and the like back to the sniper. While playing, mind you.
A laser sight dances across his fingers as he tickles the ivories. There are cell phones ringing in the concert hall, a jovial conductor (Don McManus) who breaks classical music concert decorum — repeatedly — and a pianist who dashes off stage between pieces and movements of pieces.
This just isn’t DONE, you know.
It’s all rather daft, but cleverly so. And the occasional jaw-dropping moment will make you wonder, “Who says classical music is dead?”
Wood is Tom Selznick, a long-dormant concert pianist who is giving a concert in tribute to his late mentor using that mentor’s massive Bosendorfer concert grand piano. His nerves made him give up performing five years before, but conductor Hugh (McManus) jokes around and puts him at ease.
“You’re going to hit a wrong note. And you know what? They (the audience) never know.”
The actress-wife is pushing him to get back on the stage, and even pushier radio interviewers urge him to “break a leg.”
If only.
The trouble starts when Selznick strolls onstage to join the orchestra. He opens his score, and there,in bright red Sharpie marks, is “Play one wrong note and you die!” As he works through the program (Wood is a pretty convincing pianist) and the threats mount, you think of “Phone Booth” and “The Call.” And as Selznick fights panic and sprints offstage to try and out-think his adversary, maybe you think of Bugs Bunny and the classic “Rhapsody Rabbit.” This is that nutty.
“Now you know the meaning of ‘stage fright,'” the unseen sniper hisses, a play on both the bane of any performer and a 1950 Hitchcock film. And a producer named Selznick was the bane of Hitchcock’s early career, so we know who was on screenwriter Damien Chazelle’s mind as he concocted this.
While your eyes may roll at the far-out aspects of “Grand Piano,” you need not fear that Hitchcock himself is rolling in his grave over this tribute. The execution is far from flawless, but I think Sir Alfred would approve.
“What a corker,” he’d say. And he’d be right.