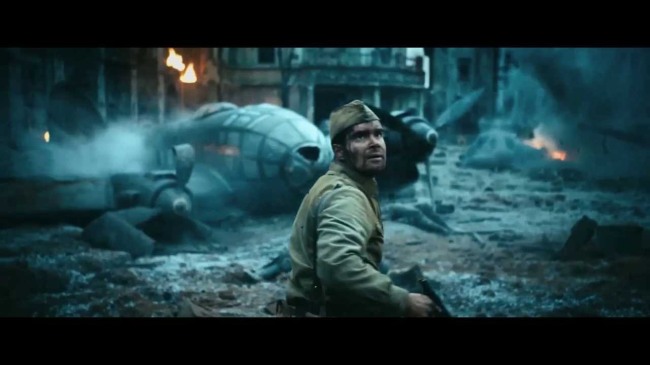 ”Stalingrad” is a huge, old-fashioned combat spectacle, a war story told on a vast scale and shown on vast IMAX movie screens, in 3D no less.
It’s Russian — oh so very Russian, an epic of “The Great Patriotic War” that mixes vivid, blood and guts combat with chest-thumping patriotism and pathos.
And unfortunately, it’s more than a little clumsy, from its absurd framing device to the simple head count of the cast of “fathers” who saved a young woman, and the world, during the “bloodiest battle in history.”
In late 1942, Soviet reinforcements cross the Volga River and storm, literally, through a wall of fire to seize an apartment building on the front lines. They rescue a young rape victim (Mariya Smolnikova) and struggle to protect her from the Germans, led by a mournful, war-weary captain (Thomas Kretschmann), who are on the brink of throwing the Soviets out of the city.
Comrade Kapitan Gromov, played by an emotional Colin Farrell look-alike (Pyotr Fyodorov) worries that his tiny band will be too busy saving Katya to save Mother Russia. But in the symbolism of the cinema, she is both girl-victim and Mother Russia — traumatized by war, clinging to vestiges of civilization in her parents’ art and piano-filled apartment, hell-bent on hanging on and having her revenge.
Director Fedor Bondarchuk (the fine Afghan war thriller “9th Company” was his) stages the room-to-room, hand-to-hand fighting with a brutal, bloody brio. The thoroughly ruined sets, from the riverfront with its improvised rafts floating troops across, to the everything-is-burned-bombed-and-broken apartment blocks, put us inside the battle — in 3D.
But this film was plainly built for the Putin-esque Soviet — sorry, Russian — market. Every excess has an old fashioned hint of Soviet era propaganda about it. As interesting as it might be to get a whiff of how the Russians see themselves and their history, Bondarchuk keeps finding ways to turn off overseas audiences.
Take the frame in which the story is told. Bondarchuk’s famous actor-director father Sergei (“Waterloo”, “War and Peace”) plays an elderly Russian doctor telling the story of his mother’s survival to a bunch of injured Germans trapped in a building collapse in the Japanese earthquake and Tsunami. Heroic Soviet — sorry, Russian — rescue teams went there to save the day.
The old doctor tells the story of the battle through the eyes of his mother, who always told him he “had five fathers,” the men who saved her and perhaps fathered him during or after the battle.
The problem with that? There are plainly six, not five, men heavily invested in Katya’s survival. At one point, they even pose on the steps of the apartment building — six of them. Who was left out of Mom’s count; the kapitan, the silent opera singer turned killing machine (Alexsei Barabash), the piggish sniper (Dmitri Lysenkov), the gruff Navy warrant officer (Oleg Volku), the one they call “Angel” or the other they call “Sissy”?
Landing Kretschmann, whose big break was saving “The Pianist” at the end of Roman Polanski’s WWII film, meant building his character up, giving him a Russian “comfort woman” (Yanina Studilina) whom he holds hostage because she’s a dead ringer for his dead wife and treats as his lover-confessor — even though they don’t speak each other’s language.
Convincing digital dive bombers attack and missiles fired from German “Moaning Minnie” launchers streak through the smoke-filled skies. Jews are murdered, and back-talking Soviet sailors are summarily executed. Every so often, for the sake of a plot device, a soldier of this side or that one yells “Freeze” (in Russian or German, with English subtitles) rather than carrying on the killing spree, just so we have the hint of a foes taking prisoners and debating, face to face.
It’s a movie every bit as bloated as the biggest movies Bondarchuk’s dad made, in his heyday. In detail and combat spectacle, “Stalingrad” is hard to beat. And whatever its failings, one can’t help but be curious about a story as connected to national identity as this one, a film that like today’s Russia, feels more Soviet than Russian.