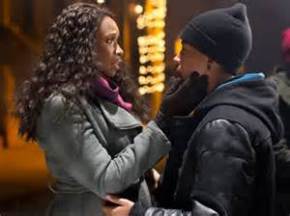 “Black Nativity” is a musical updating of Harlem Renaissance poet Langston Hughes’ play, based loosely — very loosely — on the way Jesus of Nazareth entered the world in a manger in Bethlehem. And once it finds its footing, this Harlem variation on the Nativity story manages to be sweet enough to touch people the way this “Greatest Story Ever Told” always has.
Credit the cast, especially the supporting players, and a sympathetic handling of the material by writer-director Kasi Lemmons (“Talk to Me” and “Eve’s Bayou”). They ensure that the sentimental never turns maudlin, and that even the sermonizing goes down lightly.
Jacob Latimore is Langston, a Baltimore teen who narrates his biography in rhymed couplets, but whose mom (Jennifer Hudson) is about to lose their home.
“Ain’t no miracles,” the kid figures out. “Just money.
Mom packs him off to live with her estranged parents, a preacher (Forest Whitaker) and his wife (Angela Basset). Rev. Cobbs could have been just a judgmental stiff, mistrusting the 15 year-old who is no sooner off the bus than he’s robbed and accused of robbing someone else. In the masterful Whitaker’s hands, the Reverend is an emotional man betraying moments of guilt and a need to connect with this grandson he’s never known. The character could not be more different from Whitaker’s turn as “The Butler,” a proud, Afro-centric Harlem preacher who fills their Harlem brownstone with art and reminders of and Harlem’s African American past.
“I like to remember where we’ve come from.”
Bassett gives a busier performance, the very picture of a grandmother trying too hard to connect with the boy in the hopes he’ll lead to a reunion with his mother.
Tyrese Gisbon has his best role in over a decade, playing a street thug who nicknames the kid “Lunch Money” while they’re in jail, whose life reconnects with Langston’s throughout the story.
The great Vondie Curtis Hall is a wise and streetwise pawn broker who says he knew Langston’s dad. And Mary J. Blige plays an angelic parishioner at Rev. Cobb’s Holy Resurrection Baptist Church.
Langston has shown up on the eve of Christmas, and that church is famous for its “Black Nativity” pageant — a Kwanzaa Meets New Testament spectacle that the kid, hung up on coming up with mom’s mortgage money, isn’t interested in.
“Church tonight? You trippin.’ I don’t DO church.”
This being a musical, and one featuring the Oscar winning Hudson, characters break into song, lamenting their lives, their lost childhoods or lost child. The music, by Laura Karpman and Raphael Saadiq, is forgettably generic modern soul with hints of hip hop. But it is nicely integrated into the story and the production uses polished singers Hudson and Latimore to buttress the less-known-for-their-singing Bassett and Whitaker. Gibson more than holds his own, and Blige is just — Blige.
The best sequence is the most fanciful and poetic, with young Langston imagining Harlem as modern day Judea, with Times Square electronic billboards advertising “Visit Gomorrah” and “Bank of Judea.” Now, as then, a pregnant Mary (Maria, Grace Gibson) and Joseph (Jo-Jo, Luke James) can find “no room at the inn.”
The sermon is never less than obvious and gets downright heavy-handed, but Lemmons wisely keeps the film brisk and brief, not allowing it to overstay its welcome. It may not reach the status of “holiday classic,” but the high-minded “Black Nativity” is still a modestly entertaining and uplifting version of a “greatest story” that has proven as malleable as it is timeless.