You can search the Internet, high and low, for a profile of filmmaker Abel Ferrara that doesn’t use the word “maverick.” He’s made it his brand, probably using it about himself and in press releases like the late U.S. Senator who so coveted that label.

I’ve always thought “indulged” was more suitable. He came to fame in his native New York with thrillers like “The King of New York” and “Bad Lieutenant” decades ago. But in the years since, Ferrara’s turned out increasingly iconoclastic indie films. With an exception, here and there, he’s been on something akin to a deeper and deeper gaze into his own navel, or some other bodily orifice.

And even though these movies make barely a peep outside of his tiny cult following, he continues to find financing and stars — OK, a star — willing to take these unprofitable, obscure journeys with him.

Willem Dafoe has become his muse, his alter ego, for half a dozen films now including the upcoming “Siberia” and most famously in his Ferrara-esque portrait of Italian novelist, poet, intellectual, political gadfly and filmmaker Pier Paolo Pasolini.

“Tommaso” has the collaborators teaming up for a story about an ageing, insecure filmmaker struggling to to polish a symbolic quasi-religious script (story-boarded) in Rome, obsessing over his little girl, fretting over his very young wife’s possible infidelity, as he cheats with students in his acting class and a shapely server at his favorite cafe, in between long “sharing” sessions with an English language AA group.

The young wife is played by Cristina Chiriac, the model-actress-wife of Ferrara, less than half his age. The toddler is Anna Ferrara, their daughter. Dafoe is like a slightly-younger, somewhat more handsome version of Ferrara, who now makes his family’s home in Rome.

The sum of which begs the question, “Wait, Ferrara’s in Alcoholics Anonymous?”

The semi-autobiographical Tomasso is being tutored in Italian and teaching Italian actors (almost all women) movement, “finding the gesture” via games that look like conga lines. It feels very 1970s, and Dafoe shines brightest in these scenes where one can leap to the conclusion “This is how a Willem Dafoe acting school might look.”

“For me, performing is always somewhere between control and imbalance,” he lectures, a student translating for the gathered Italians. Acting is “not to show, but to DO.”

Tommaso has his freedom and his routine, teaching, learning Italian, attending meetings, having dalliances, writing (in voice-over, in his head) a screenplay with Eskimos and a bear and taking his child to the park.

There is stress in the marriage, which he vents in his AA meetings, or afterword with sponsors and the like.

No, you clueless old cradle robber. She’d appreciate a little freedom herself, not being on child-care duty 24-7, not having to be at your beck and call, the chance to discover the city (she is Moldavian-Russian) and life for herself.

Neither the character nor the filmmaker seem to get this. 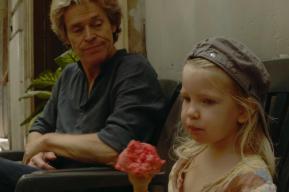 The usual surreal Ferrara touches decorate the tale — documentary footage of Indian and Moldovan musicians and Buddhist teachers, a graphic bear attack, a little Sophia Loren Italian film dance scene, and a “flashback” to a Dafoe interrogation scene that could have been in Ferrara’s “Pasolini.”

And the excesses are here — lots of female nudity, sex, screaming jags, violence, a moment where the angst-ridden artist literally yanks out his own heart.

Still, it’s not Ferrara’s most “out there” film, and Dafoe is always a riveting presence. He is mesmerizing in the AA scenes, amusing in the acting classes and convincingly “at home” in Rome.

No, the pondering of “What is truth?” and the nature of those things that “elicit pleasure in your mind” isn’t solved. Ferrara, at 69, still comes off more a poseur than the deep thinker he’s trying to attach to that “maverick” label.

It’s pretentious and indulgent. But as with most Ferrara films, “Tommaso” makes for an interesting trip into a seriously unconventional mind visualized by an always unconventional storyteller.

And if European money lenders are still indulging Woody Allen, why not Ferrara?