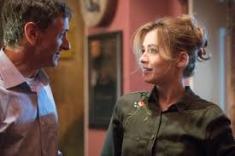 Truth be told, “End of Sentence” doesn’t get you, straight out of the gate.

It’s downbeat, and the father-son rift acted out by Logan Lerman and John Hawkes feels contrived, more something dictated by the script and the near archetypes the two play.

But then this story of a sullen, just-out-of-prison son (Lerman, of Amazon’s “Hunters” and the tank movie “Fury”) who wants nothing to do with his doormat Dad (Hawkes of “Winter’s Bone” and “Three Billboards” and “Peanut Butter Falcon”) finds its way to Ireland. It’s where the husband promised to spread his cancer-stricken wife’s ashes when their boy got out of prison.

And even though that road picture/father-son “bonding” premise has a hint of the over-familiar about it, the movie lifts off, finds its heart and wit and transcends its potential.

It happens in a bar, after the quarreling father and son — each has issues, each blames the other for a BIG hidden hurt — have given a lift on their cross-Ireland trek to a bar pick-up (Sarah Bolger) the son has taken a fancy to.

There’s a band in the pub, as is sometimes the case in Ireland, ALWAYS the case in movies set there. And they launch into a song and Jewel joins in on The Pogues’ “Dirty Old Town.”

We’ve seen father Frank’s leeriness about giving her a ride, belligerent punk Sean’s insistence on it and Jewel’s sweet way of consoling a man who has lost his wife, who has started to doubt he’s even the father of this miscreant kid, who realizes that this whole trip is just another instance of somebody imposing what they want, their will, on him.

That moment puts an exclamation point on her kindness, lets her explain why she’s doing it — “You make a girl feel dignified” — and signals an abrupt turn for the better as the movie finally starts upending expectations and reveals its charms.

Producer (“What Maisie Knew”) turned director Elfar Adalsteins, working from a Michael Armbruster (“Beautiful Boy”) script, makes everything that the first act contrives to set up have some little payoff by the finale.

Maybe the opening bursts of hostility, where Sean refuses to let his father visit him in an Alabama prison — only his mother — his muttering to the guard who wonders “Who’s that?” about this man Sean won’t let pick him up at “End of Sentence” that Frank is “Nobody,” still seems extreme.

Maybe the bullying kid, testing and pushing around his old man, seems — in not justified, at least understandable.

A curious, unsettling Irish way in a Dublin bar that provides nothing but more doubts and few answers to Frank’s doubts, and a road trip that has the odd adventure and the occasional bittersweet connection to the late Anna’s past provide the build-up.

But it is Bolger, best-known for her work in the biker gang series “Mayans M.C.,” whose introduction may be sketchy and back-story a tad too pat, whose character raises the stakes and whose turn in a simple, formulaic scene gives “End of Sentence” the life it needs, just with a song.