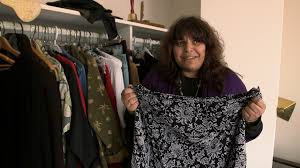 The documentary as memoir may be the trickiest to pull off.

In an era when obsession with “personal story” and “personal struggle,” it’s difficult to make one that stands out from what sounds like a chorus of Pavorittis warming up — “Me me me me MEEEEEEEE.”

And if you can’t relate to the person making it on virtually any level, well, it’s tune-out time.

I’ve liked some of Judith Hefland‘s work when I’ve run across films of hers on the PBS “POV” documentary series, “Blue Vinyl” (about the toxic plastic all around us) stands out. I can’t recall if she was there the day I hung out with veteran director George Stoney as he traveled my corner of North Carolina to talk up and do some interviewing for the labor history of the South film “The Great Uprising of 1934.” She co-directed that.

But “Love & Stuff,” her second doc feature about close relationship with her mother, left me cold.

She revisits — at length — the trauma covered in “A Healthy Baby Girl” (Hefland had cervical cancer at 25 caused by a miscarriage-prevention drug her mother was given). “The camera helped us stay connected,” she says of her incessantly videotaped moments with mom, decades-worth, but it’s obvious they were ridiculously tight, with or without “documenting” visits to the beach, meals, etc.

“Love & Stuff” covers that relationship’s end, her mother’s death and dispersal of her “stuff,” much of which Hefland ended up stuffing into her otherwise roomy Upper West Side apartment. Scores of elephant figurines, tchotchkes of every description, used lipsticks and dental appliances — she wanted to save it all to keep that connection with Mom.

It’s punctuated by Helfand’s adopting a baby girl at 50, and her efforts to lose weight so that she will make it to 90, when baby Theodora will be 40.

“How do you live without your mother?” she wonders, weeping, after her own mother dies.

The film is all over the place, like life — messy. But boy, this memoir got on my last nerve.

Maybe it’s the timing, seeing this in the middle of a pandemic, with much of the country out of work, millions upon millions without health care. Try to “connect” with a woman who only pulls the trigger on an adoption when a Jewish baby girl is available, who hires a nurse to get her through the first few days of motherhood, the nanny she brings in to do childcare afterwards, the shrink she consults when trying to take off the weight she put on in the decades after her hysterectomy, the personal trainer, the elective surgery to shrink her stomach.

The privilege and indulgence would have stood out at any time. Mid-pandemic? Eye-rolling is the only polite response.

Perhaps others will find points of connection that make this worthwhile to them. Not me. Some people you have to let “speak my truth, recount my struggle” to somebody else.

Credits: Written and directed by Judith Hefland. A Medalia release.