Posted on October 14, 2017 by rogerinorlando

So “Happy Death Day” is a “Groundhog Day” knockoff with a dead teenager horror twist. Somebody gets to live and relive a day over and over again until he or she “gets it right.”

And yeah, so what if that’s already been done with the dark, romantic and soulful “Before I Fall” just this year. No points for originality, in any event.

But all that matters is A) Is it scary? and B) Is it funny? Those answers are “A little” and “More or less.”

Strip away a charismatic mean girl turn by leading lady Jessica Rothe (“La La Land”) and there’s not much to this.

Teresa, or “Tree” (pronounced Trey) as she calls herself, wakes up one morning to the sound of Bayfield University’s tower clock striking nine. Just the look on Rothe’s makeup-smeared face tells us what happened last night, and that it wasn’t the first time.

“Am I in a dorm room?” she asks the stranger (Israel Broussard) she woke up with. She demands “Tylenol,” her clothes and manages a Walk of Shame that has no shame, brushing off her sleepover pal, the “Save the planet” petitioner on the quad, her dad’s phone calls to ignore, a previous one-night stand who wonders “why you never responded to my texts,” the domineering sorority president (Rachel Matthews) and plane-Jane sorority sister roommate (Ruby Modine).

She’s got a class to get to, a professor (Charles Aitken) to make out with and this night’s party to prep for. That’s what party girls like her do, especially on her birthday.

But the night ends with a hoodied nut with a knife wearing a school mascot mask trapping and killing her in her shortest/best party dress. Never saw that coming. The first time, anyway.

She responds with shock, the slow realization she’s been through this before leading to dismay, outrage, defiance and some sort of acceptance.

No, bingeing on junk foot (“Not a KAPPA diet!”), breaking wind in front of random one-nighter Carter (Broussard), whom she tries to unravel this mystery with, hurling herself at her married paramour and taking a stab (hah!) at being nice don’t add up to Elizabeth Kubler-Ross’s Five Stages of Death and Dying (denial, anger, bargaining, etc.).

Or DO they? That anchored “Before I Fall,” which was based on a best-seller and thus a lot deeper than this random Ripper riff on “Groundhog Day.”

I mean, the school is Bayfield, and their team name is…The Babies? It’s a scary mascot mask, but I kept hearing Alec Baldwin barking out “Cookies are for CLOSERS” every time I see the killer show up in it. 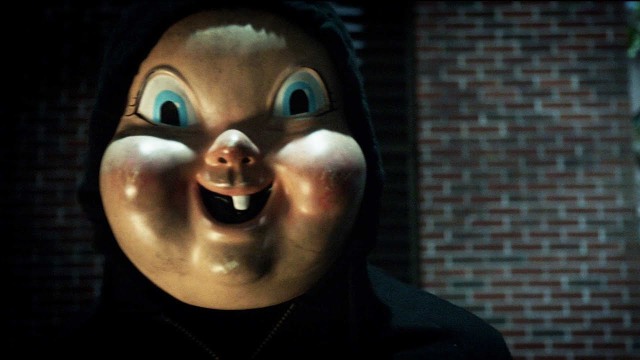 The solution to “Who’s KILLING me, night after night?” is easier to guess than any reason — supernatural or otherwise — that Tree-pronounced-Trey is being “taught” this “lesson.”

She’s got issues — a bit loose (“slut” and “skank” can only be used, with love, between sorority sisters) — but nothing that adds up deserving a brutal, gruesome death night after night. Maybe the male screenwriter has issues of his own.

But through it all, our heroine Rothe soldiers on — giving as good as she gets in one knockabout struggle after another, creating empathy for this flirtatious floozy who fights back and slowly but surely reasons her way to an answer.

There’s barely one moment of pathos in all of this, leaving “Death Day” miles behind “Groundhog Day” or “Before I Fall” in terms of ambition, subtext and execution.

The laughs are mostly of the sorority girl name-calling variety. You know the word. It start with “bee” and ends with “yotch.”

The movie all but abandons the “relive your life” thing and devolves into too-too-generic stalked sorority girl thriller in the third act.

But in Rothe, we’ve got a new scream queen worthy of the crown — plucky, testy, sexy and spot-on in landing a catch-phrase or punch line.

“Did I totally embarrass myself last night?”