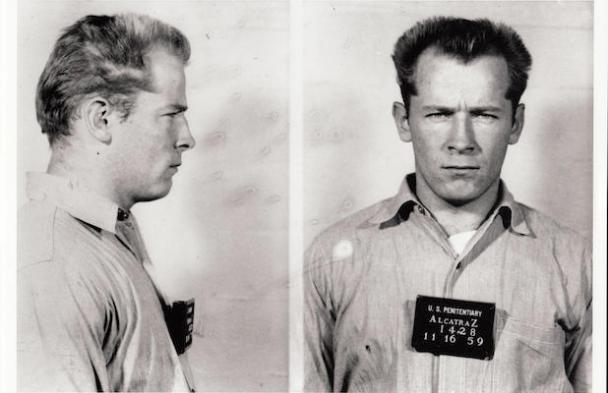 We only hear his voice, running underneath mugshot photos and the occasional
bit of silent black and white surveillance footage. Convicted crime boss and
murderer Whitey Bulger comes off as articulate and calm, with that polished
voice having a “Who, me?” quality of martyred incredulity.
“Do what youse want with me.”
But nobody comes off well in Joe Berlinger’s intricate, troubling crime
documentary, “Whitey: United States of America vs. James J. Bulger.” Not the
cops, who profess frustration at the decades they were unable to bring Bulger to
justice, not the Massachusetts prosecutors who finally had him in hand and in
court, not the F.B.I. and Justice Department, which allegedly protected him from
jail during a murderous, extortionate crime spree that ranged from the ’60s to
the ’90s.
Not even the families of the victims, united in grief, eaten up by outrage, a
little slow to recognize that, in some cases, the relative they lost was playing
with fire — dating mobsters, hanging out with them.
A tangled web? Put it this way, they had to simplify, in the extreme, the
movie “The Departed” to make this “vicious, venal murderer’s” tale easy to
follow and understand. But at least the fictionalized “Hollywood version”
offered closure.
Berlinger, a veteran filmmaker with the acclaimed “Paradise Lost” films about
the unjustly convicted West Memphis Three as the crown jewel of his resume,
wades into the morass of the Bulger case, giving us the highlights, speaking to
most everybody involved and straining to draw conclusions where the evidence is
clearest.
Bulger “ran amok” in Boston for decades, strong-arming businesses, murdering
rivals and cultivating a ridiculous “Robin Hood” image, that of “a gangster with
scruples.” Someone or some institution was protecting him. The culprit was the
F.B.I., the one organization that refused to cooperate with Berlinger’s film.
They had Bulger on the books, they say, as an informant. Nobody knows how far up
the chain of command this deal went, but Bulger was untouched by the law for
years and years, until local authorities finally came for him in 1994. But he
fled and hid out for 16 years before his final capture in California.
Berlinger focuses on a protege of Bulger’s and picks up the thread of the
story from assorted reporters who covered the case and the scandal that arose
from it. One of those books about the case, “Black Mass,” is being made into a
feature film starring Johnny Depp as the infamous mobster.
But mainly, Berlinger spends his screen time with Patricia Donahue, whose
husband was killed in a drive-by over thirty years ago, with Steve Davis, whose
sister Debra was murdered, and with Stephen Rakes, whose version of the American
Dream was owning his own liquor store, but who had Bulger, in his place and in
his face, basically taking the business from him within days of opening.
The prosecution team sits, in a row of three, trying to explain why justice
was so late catching up to “this monster.” Reporters have trouble containing
their fury at the injustice of it all, having the local F.B.I. protect Bulger
because they were frantic to have some insider give them apparently useless
gossip about what the Italian mob, or competing Irish mobs, were up to.
And the survivors weep and long for their day in court, with even that
falling short of their hopes for revenge. They, like the viewers of “Whitey,”
have to feel frustrated by the scope of this case, the lack of comeuppance for
so many involved in it.
The fact that Bulger, at long last, is rotting in jail, is little
consolation. Perhaps only a Hollywood version of this story, one starring Johnny
Depp, can give it a satisfying conclusion.