For the first time, maybe ever, Meryl Streep looks small

Posted on January 9, 2014 by rogerinorlando 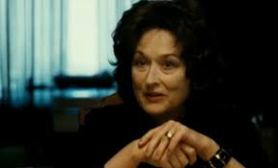 She was up for the lead in “Saving Mr. Banks.” And she would have been great in it, co-starring with Tom Hanks, being a bit more age appropriate for P.L. Travers, being bitchy as all get out.

But no, Meryl Streep chose to chew the scenery and pile on the ham in “August: Osage County,” an ensemble picture that lets her and Julia Roberts raise the volume in a film of Tracy Letts’ Pulitzer Prize winning play.

Nothing she says is far from the truth. Exaggerated and shrill, but not far off the mark. Was Walt anti-Semitic? Possibly. Sexist? No more than was normal for his era. Racist? Possibly, certainly racially insensitive, even though he tried to get civil rights leaders to sign off on “Song of the South.”

But seriously, going back over all this, while handing Emma an award, seems ill-timed, ill-considered and petty. It makes Streep look needy, like she needs the Oscar she so does NOT deserve for “Osage.”

This is very Weinstein of her, for those who know the rep of the film studio famed for managing their films’ Oscar campaigns, and snarky counter-campaigns. Tacky. And wouldn’t you know it, “August: Osage County” is a Weinstein Co. release.

Expect her to walk this bit of venting back within a day or two.

Meanwhile, The New Yorker sets out to explain it all away. Streep, who gives few interviews and fewer public speeches, has a “history” of taking public feminist stands about Hollywood subjects. Maybe so. But she’s not that public, which makes her decision to do all this on one of those rare-ish occasions when she does a little public speaking just amplifies it.