Posted on November 20, 2013 by rogerinorlando 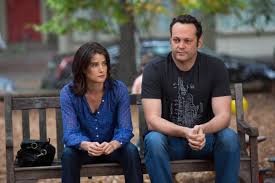 “Delivery Man” is a Vince Vaughn comedy about an irresponsible oaf who discovers that his sperm-donations-for-money years resulted in 533 kids he never knew he had.
Since he learns this news, that “his” kids are reaching out to break the anonymity of his donations, just as his “You’re too immature for me” girlfriend (Cobie Smulders) tells him she’s pregnant, we have the makings of a charming “Time to grow up and be responsible” comedy.
Which is exactly what “Delivery Man” manages to be.
To play David, the impulsive meat truck driver-son of a New York butcher, Vaughn tones down the manic patter that made him famous and reaches for the heartstrings. David is the guy his Dad (Andrzej Blumenfeld) and plump, butcher siblings can never count on. He’s always late, always letting people down, always trying to get rich quick through some harebrained scheme. How many books on hydroponic gardening should be buy before running a pot farm in his Brooklyn apartment? He’s in debt up to his eyeballs when the scary lawyer from the fertility clinic shows up.
“Yo no soy David Wozniak,” David insists. To no avail. Mistakes were made, his seed spread further than he ever wanted and now the offspring are suing to find their “father.”
He needs a lawyer. Slovenly, overwhelmed father-of-four Brett (Chris Pratt of “The Five Year Engagement”) is his pal, and his last hope.
“Kids are a blackhole,” Brett whines.
“Do I have to get a REAL lawyer?”
“You can’t afford a REAL lawyer!”
And then David makes the fateful decision to look at the profiles of the kids suing him, to look them up and stumble, anonymously, into their lives.
“Delivery Man,” based on the French-Canadian comedy “Starbuck,” takes us on a roller coaster ride through the lives of kids thriving (a pro basketball player) and struggling (a street musician, a bartender/actor). Writer-director Ken Scott, who also did the original film, deftly recycles the exultant highs and touching lows as David cheers on his Knicks-star son like a proud papa, and saves his distraught, overdosing daughter.
“They need me,” David pleads to Brett. “They need a guardian angel.”
The story plays up David’s innate good-heartedness, and happy accidents allow him to make a difference in their lives, even in a drop-in dad sense. But he also gets a taste of the tough side of parenting.
Vaughn is at his most appealing here, even if that robs the film of some of its potential laughs.
Yes, the French-Canadian version seemed to have more snap to it. But this was never a standard issue Hollywood yuk-fest. This story was always about growing up (better late than never), compassion and learning to be someone people can depend on and love. Whatever laughs there are, they don’t make or break the movie the way Vaughn’s scenes as a guy who meets kids growing up fatherless (no mention is made of who raised them) and with problems. Vaughn gives these scenes just enough heart to work, though the biggest moments were better played by his Canadian predecessor, Patrick Huard.
And a fit and trim Vaughn strips away some of the lumpy loser to dad character arc that Huard brought to David.
The supporting cast is a bit skimpy on comedy charisma, which happens in films where you spend all your money on your star. Smulders (“How I Met Your Mother”) has little to play save for being gorgeous and a woman worth becoming a better man for, and Pratt is mildly amusing but never in much danger of upstaging the star. Until the finale.
So it’s no “Starbuck,” which most people won’t mind because Americans don’t read subtitles. But even in this form, “Delivery Man” and the guy who plays him still deliver where it counts.