Movie Review: A father tries to save his son when a drug deal goes bust, “Hammer” 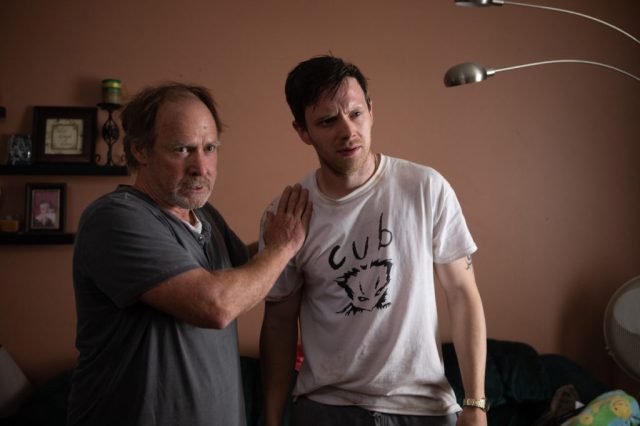 Some thrillers work simply by hewing closely to the Thriller Rules.

Don’t waste our time. Pacing equals “urgency” and urgency is what makes the pulse pound. Raise the stakes and keep them high. Give us twists we never see coming.

Make the interludes revealing about character, but not TOO revealing. Don’t over-explain.

And lastly, and this one comes directly from Hitchcock, “Good villains make good thrillers.”

Canadian writer-director Christian Sparkes’ “Hammer” follows those to a T. He doesn’t waste time. The movie’s 81 minutes practically fly by.

He keeps it simple, and keeps the twists coming.

High stakes? How about a son (Mark O’Brien of “Ready or Not”) comes home, on the run from a drug deal double-cross that backfired. His whole family may pay for his criminal associations and his blundering.

And the villain? That would be veteran character actor Ben Cotton (“Stargate: Atlantis,””Hellcats”). As Adams, the money man fetching the cash young Chris (O’Brien) has just duffel-bagged across the border into Sault Saint Marie, Ontario, he has the build and the crazy eyes of a guy you do NOT want to cross.

Will Patton plays the retired teacher Chris runs home to when the scheme goes wrong. Only not exactly. Mom (Lara Jean Chorostecki ) and Dad kicked Chris out of the house for shenanigans just like this. They have his younger brother (Connor Price) to worry about, after all.

Dad Stephen has just reassured Mom Debbie that “Chris is fine,” when he stares — slack-jawed — as a guy looking just like his son hurtles into town, a bit bloodied, racing a dirt bike to his now-empty grandfather’s house.

Chris doesn’t want Dad involved because “You gave up on me.” But he’s got a body to stash, bags of money to fetch, a drug distributor (Cotton) to evade. So sure, OK. Come along. But no lectures about why he didn’t “just turn to you because I need help.” That wasn’t really an option.

Patton, one of the great character players (last seen in “Halloween” and the “Swamp Thing” TV series, gets across their “history” with just a look, a wince of recognition, a grimace of guilt. How DID his son go so wrong? Can he believe a word out of this punk’s mouth?

A LOT is left unsaid here, which makes us work and forces the actors to “be” their complicated history, not verbalize it. It’s textbook screenwriting and bang-on.

Sparkes (“Cast No Shadow”) runs all manner of random/not-random scenes by us. The hunt for the “stashed” cash includes a senile dog and a snake swallowing its own tail. The seeking of a hitman (Curtis Caravaggio) — “He’s NOT a hitman.  He’s ‘protection.'” — has a “Trainspotting” homage as “protection’s” wife shoves a baby in Chris’ hands when he walks in the door.

“She looks GOOD on you.”

A visit to a pawn shop/jeweler goes awry, just as the opening scene’s double-cross collapses in on itself.

Everybody tries to keep things from everybody else, which makes Stephen’s ongoing in-person and on-the-phone fight with Deborah over her father, freshly-placed in a nursing home and hating it, even trickier.

“Hammer” — the title is one more thing for us to figure out — doesn’t break genre. It’s the umpteen-millionth “drug deal gone wrong/drug money/drug gangsters wanting that money” thriller. The surprises here come within the narrow confines of a well-worn plot path.

But more importantly, in this instance, it doesn’t break the Thriller Rules. They make this “ticking clock” thriller tick over like clockwork, jumpy opening to nerve-wracking finish.

Credits: Written and directed by Christian Sparkes. A Vertical release.