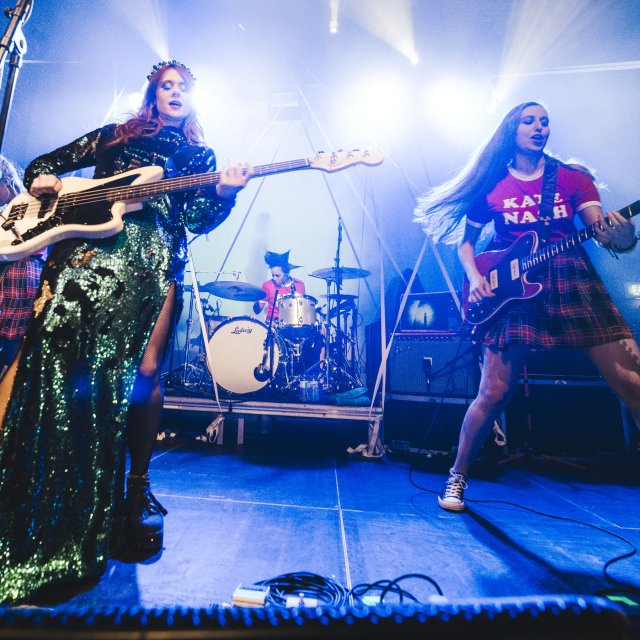 So we know how the hard-luck story presented in “Kate Nash: Underestimate the Girl” is going to come out.

But do fans of the series even realize this is her second “reach for the big brass showbiz ring” career? She’s over 30 and has been in the music business since she was a teen, since a pretty young British girl singer-songwriter could launch a career on MySpace.

The meandering, uneven “Underestimate the Girl” summarizes that career, the hit song “Foundations” (2007) that led to the hit record, “Made of Bricks,” her getting a record deal and losing that deal. Amy Goldstein’s film concentrates on the years of struggle that followed, playing big venues in China, and self-promoted shows in tiny U.S. and British venues that make no economic sense, moving to LA in pursuit of a new deal, playing CMJ in an attempt to get signed, losing most of her money to a manager and forced to sell her clothes…and do radio commercials and QVC-style millennial fanboy-collectibles selling on Shop XSN.

Lyrics are superimposed on the stage, over the audience, in the performance snippets in “Underestimate.”

“I think about death all the time
Do you think that’s morbid?
I’m not like the other girls
Don’t get me started…”

She’s interesting musically and worth taking seriously lyrically. She puts on fun shows, all decked-out in Sleeping Beauty ballet costumes, or sequined body-suit on top of Elton John-platform shoes.

That happened to Kate Nash.

“It wasn’t like I was trying to be a pop star,” she insists (eye-rolls optional). “This is a matter of life and death to me because making music keeps me alive,” she says. “And being in the music industry has almost killed me.”

So she took charge of her own career, formed an all-female punk band, toured incessantly, became the “bitch from hell” about business and performing and lost her deal and kept on.

“Kate being dropped by her record label, without a doubt, is probably the making of her,” Brett Lomas, her road manager insists, early in the film.

But things go from bad to worse. 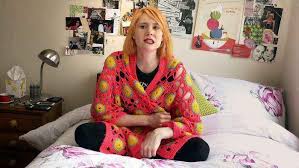 Goldstein uses concert footage, backstage banter with the band, personal appearance footage (Kate and guitarist Linda Buratto performing, sans mikes, in an office somewhere), Kate’s online video diary and interviews — Kate, lying on the salt-flats of Death Valley — to paint a portrait of somebody who talks a good game, drops the word “artist” like it’s in her contract and…does what pretty young things do when they’ve had a taste of fame — she tries her hand at acting.

“Underestimate the Girl” skims the surface of much of this, playing up Nash’s victimhood and her pluck, giving us just enough of the music to want to find more.

She was already dabbling in acting before “GLOW,” so that “life and death” desperation she makes music out to be seems just an element of that larger craving for “fame.”

But she also doggedly plays the hand life deals her. She moved to LA to “make a lot of money,” she admits. “I told the universe what I wanted, and the universe said ‘No.'”

And to her credit, the glow of “GLOW” didn’t pull her off the hard path she’s chosen for herself. NOW I’ve got a little money and a little fame, so let’s make another RECORD.

The film is a mixed bag, an interesting look at the disposable nature of the music business and the way that cripples musicians and the things a singer-songwriter has to do to hang on (Aimee Mann and others started the “house concerts” craze, back when everybody had the money to indulge in such things).

But presenting her turn to “acting” as abrupt and Netflix driven is a cheat, and as likable as Nash seems to be, the “woe is me” privilege that creeps in here and there grates. We don’t get enough of her mistreatment by the British press (back THEN) and enough justification for “Why should we care, again, now?”