Movie Review: What might be out there in “The Vast of Night?”

“The Vast of Night” is a mystery wrapped in an enigma and boxed up in an homage to “The Twilight Zone.”

It’s a beautiful, gloomy and nostalgic film whose “The truth is OUT there” answers may be obvious, and whose long, monologue-driven set-up will test your patience. Seriously.

The first twenty minutes, a series of showy, walking/chattering tracking shots through small town America in the late 1950s gathering darkness, is marred by one of the epic under-enunciations of the post-Brando era. Co-star Jake Horowitz rushes and mutters his lines, and being photographed from behind and like everybody else, in shadows, you can’t make out more than a quarter of what he says.

Plucky teen switchboard operator Fay (Sierra McCormick) breathlessly tags along with him and blurts out “Why do you CHANGE your voice” when he’s on the radio?

Because, dear girl, no manager, even at WOTW in BFE New Mexico, would let him on the air if he can’t be understood.

The opening frames this story with a Rod Serling impersonator introducing tonight’s installment of “Paradox Theatre,” and for the first time, first time feature director Andrew Patterson transitions from a chic ’50s cathode ray tube showing us black and white images to our New Mexico setting (in widescreen, dimly-lit color).

It’s the opening game of basketball season, and “everybody in town” is eating take-out in their car in the parking lot, waiting for Cayuga High to take on an Indian reservation school in the town’s tiny Quonset hut gym.

Cayuga Falls, by the way, was where Rod Serling lived. It was the name of his production company, the one that made “The Twilight Zone.”

Everett (Horowitz) is the cock-of-the-walk in this tiny berg, swaggering in with his Buddy Holly glasses and Ricky Nelson vest to set up the radio station’s recording of the game, maybe help with a wiring problem that may be a repeat of “that time a squirrel chewed through it,” every single person in town wonders.

Fay, in her cats-eye glasses and ponytail, eagerly tags along. She’s got this new tape recorder and wants Everett to show her how it works. They proceed to “interview” people in the parking lot as practice, for her and him. She’s sweet on Everett, and he indulges her prattling on about several years of articles from various science magazines — “radio controlled cars, vacuum tube transport” — all of which will be around before “the year 2000.”

Eventually, she drops back in for her nighttime town switchboard operator job, and “Everett ‘The Maverick’ Sloane” drops behind the mike to spin records on the “Highway Hits” show.

“That’s the word from the bird.”

Fay hears it first, this mechanical, rhythmic static on her switchboard. Everett records it and plays “a sound bouncing around the valley tonight” to his listeners, looking for answers. Maybe they’d rather hear a live broadcast of the game which for some reason the station is tape delaying. But when we hear the rube in charge of recording and reciting his version of “play by play,” maybe not.

But this is when “The Vast of Night” settles in to solve its mystery. A long call from a guy who used to be in the military recognizes the static, but “everybody only knows ‘pieces’ (of any military secret) in the military, so nobody would know the whole thing.”

Something is “out there,” in the sky, at “Sputnik heights.”

Everett and Fay abandon their posts and dash around in the dark, looking for answers. 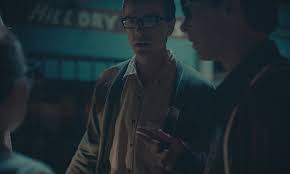 Patterson’s movie, working from a script by newcomers James Montague and Craig W. Sanger, cloaks all this mystery in 1950s small town nostalgia. The camera captures the eeriness of empty streets and the hominess of a place where everybody knows everybody else, and person-to-person gossip was the Snapchat of its day.

The great achievement of “Vast of Night” is to revisit how utterly “out there” Serling’s “Twilight Zone” would have been in its day, even in the Atomic Age, when UFO mania was born and peaked.

But the film is a triumph of tone over substance, of aural aura over clever writing. Patterson blacks out the screen, here and there, or zooms in on an old wooden radio cabinet, letting us swim in the storytelling we’re hearing over the air. The most coherent moments are like a filmed radio play.

Still, even back then, mysterious radio (or phone line) sounds and “lights in the sky” would have people wondering if “The Day the Earth Stood Still” was coming.

That said, it works, sucking you into its “vast night” and taking us all back to an innocent time where the future was endless possibilities, “radio” was how a small town kid punched his “ticket out of here,” and TV took you to “another dimension…the middle ground between light and shadow, between science and superstition.”

1 Response to Movie Review: What might be out there in “The Vast of Night?”